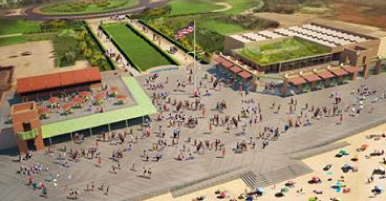 Locals to get their say on $65M Jones Beach makeover

All members of the public are invited and encouraged to attend as they will have the opportunity to review and discuss the five year $65 million initiative that will restore and transform the historic park.

“We are relying on the community to be a great voice in this historic transformation. Thanks to the continuous investment from Governor Cuomo and the New York Works program, we are able to organize and execute extraordinary transformative initiatives like the Jones Beach Revitalization Plan,” said State Parks Commissioner Rose Harvey.

“For decades the community has responded to and cared for Jones Beach as one of our proudest crown jewels. Now it’s their opportunity to play a significant role in shaping Jones Beach, building upon and carrying on its legacy for generations to come.”

The open house will offer members of the community a chance to review renderings of the proposed park improvements, ask questions and discuss the plan with presenters.

In addition to the May 8 public meeting, State Park representatives have begun holding a series of meetings with leaders of various communities to further inform and collect feedback.

As outlined by Governor Cuomo in March, the Jones Beach Revitalization Plan will focus on restoring historic and aesthetic grandeur, strengthening storm resiliency, expanding food and recreational opportunities and streamlining park entry, all of which will improve economic development and increase visitation to the park.

The plan will primarily be funded through the NY Works program, which in its first two years has invested $265 million into the state park system.

The meeting is the initial step in the State Environmental Quality Review process during which the public is invited to participate.

This will help State Parks in identifying issues, concerns and alternatives as well as determining the depth to which each of the topics are explored during the environmental review process.