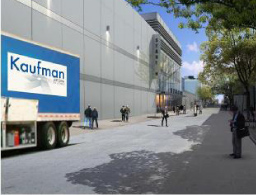 Kaufman Astoria Studios announced that it plans to build a new 18,000 s/f sound stage on its campus within the next two years.

The new stage, which will be called Stage N, will bring the total number of stages at the historic Kaufman Astoria Studios to eight, not including the recently opened back lot.

The campus also has a music recording studio that can double as a stage.

“Film and television production in New York City has never been stronger. With Stage N, Kaufman Astoria Studios will be able to accommodate even more projects and continue to make New York the film and television capital of the world,” said Hal Rosenbluth, president, Kaufman Astoria Studios.
Stage N will be located next to Stage K, adjacent to the back lot.

Kaufman-Astoria Studios is New York’s premiere full-service film, television and music production center, with some of the largest and most sophisticated sound stages on the East Coast. It recently opened New York’s only outdoor backlot for exterior shooting, featuring 34,800 s/f of space and an entry gate designed by David Rockwell.

The 500,000 s/f studio space includes seven sound stages ranging from 3,260 to 26,040 s/f in Stage E (the largest stage outside of California), a music recording facility and offices for creative staff.

First built in 1920, the studios include the oldest sound stages still in use today.

Over 100 films were produced at Kaufman-Astoria Studios when it served as the original home of Paramount Picture during the silent era. Actors and directors who have worked at the studio include Rudolph Valentino, W.C. Fields, the Marx Brothers, Sydney Lumet, Francis Ford Coppola, Jonathan Demme, Paul Greengrass, Woody Allen, Martin Scorsese and many others.

Locals to get their say on $65M Jones Beach makeover