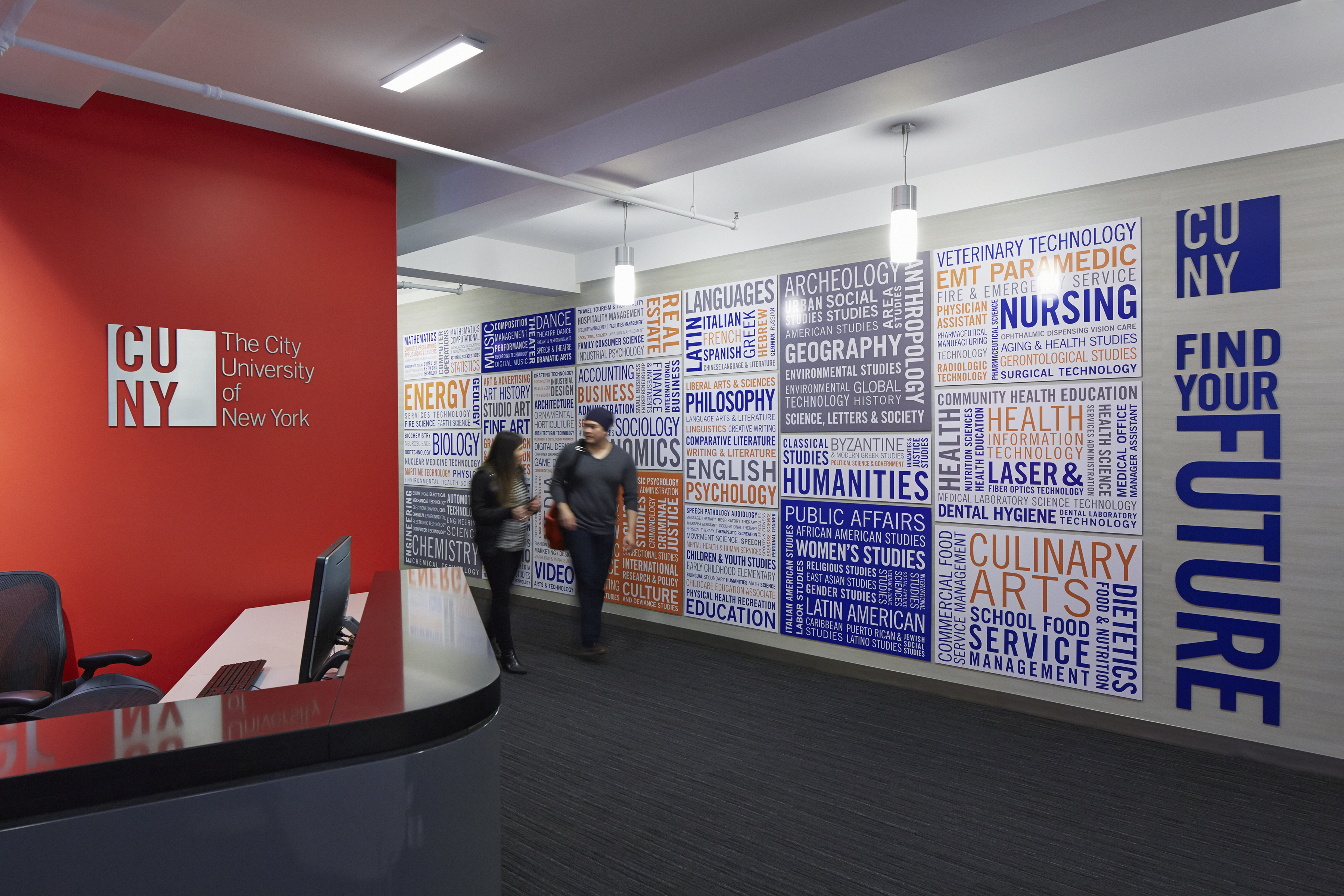 After 55 years in a former New York City Health Department building, the administrative offices of The City University of New York have been moved to a centrally located building at 205 East 42nd Street.
TPG Architecture served as design consultants to CUNY for the new, 165,000 s/f of space.

The new location is home to the CUNY Welcome Center with reception services designed by TPG on the ground floor and interview and advisement services located on the eighth floor.
TPG approached the design of the Welcome Center like a retail area. The designers saw anopportunity for branding, both for CUNY as well as for the individual schools.
TPG made the front-facing areas informative and easily digestible for the target audience, most of whom are in their late teens.
The approach is more visually striking than the norm at many schools and conveys effectively the dynamism, diversity and urban quality of CUNY.
TPG adopted a wayfinding system and room identifiers throughout the CUNY portion of the building.

A new Hampton Inn hotel, designed by Gene Kaufman Architect (GKA), is set to make its debut in the historic building at 32 Pearl Street in Manhattan’s Financial District.
The hotel suffered damage during Hurricane Sandy, but following a restoration, it is ready to welcome guests
GKA converted the existing Art Deco-era structure into an 81-room hotel, with a new lobby designed by GKA’s Interiors Group, transforming the building into a state-of-the-art hospitality destination while retaining its old New York charm.

“32 Pearl Street had been through a number of transitions throughout its history,” said Gene Kaufman, founder of GKA.
“We wanted to preserve its classic feel and sense of solidity and permanence while returning a number of features, like the entrance and a rooftop addition, to a look more reflective of its original design.”
Built in 1930, 32 Pearl Street was designed in Art Deco style as offices with a “sun parlor” on the roof. Designed by Warren & Wetmore, architects of Grand Central Station, it was one of the last buildings completed by the firm before Whitney Warren retired in 1931.
The building was later converted to apartments and now is in its third life as a hotel.
The original façade has been preserved maintaining its jewel-like boutique presence amongst the towers of Wall Street.

The emergency care facility and Level 1 trauma center is the fifth-busiest emergency department in the United States and the busiest in New York City and the region.

According to Stalco prrincipal Kevin G. Harney, “The $24 million expansion and renovation has resulted in an increase in the emergency department’s size to 57,905 s/f. The number of treatment bays has doubled from 53 to 106.”
Over the past 10 years, the communities the hospital serves saw a 15% increase in population. In 2013, patient visits totaled 177,778.