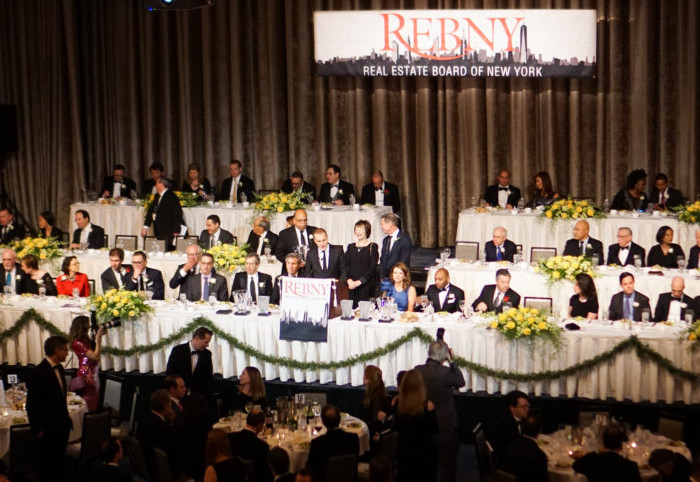 The Real Estate Board of New York (REBNY) announced the leaders who will be presented with top honors for their outstanding professional success and exceptional contributions to the real estate industry at REBNY’s 122nd Annual Banquet to be held on Thursday, January 18, 2018 at the New York Hilton in Midtown Manhattan.

Rob Speyer, President and CEO of Tishman Speyer, will receive The Harry B. Helmsley Distinguished New Yorker Award, which is presented to an industry member for their invaluable contributions to New York’s civic welfare and the real estate community. Speyer has served as Chairman of REBNY since 2013. He successfully led the organization through a dynamic period of change spanning two mayoral administrations and the selection of the first new President of REBNY in thirty years.

“Rob Speyer’s record of service and civic leadership as REBNY Chairman will be a tough act to follow,” said incoming REBNY Chair William Rudin. “His vision and dedication to the industry has made REBNY a stronger and better organization than ever before.”

“Rob Speyer’s generosity of spirit and strategic guidance throughout his tenure as REBNY Chair represents the very best of New York City. I want to thank him and each of the award winners for their extensive contributions to our industry through their professional accomplishments, leadership, and dedicated service,” said John Banks, REBNY President.

“We are delighted to honor New York’s Senior Senator. Chuck Schumer’s tireless commitment to New York captures the very sprit of the Zuccotti Award. Our 122nd Annual Banquet will be a night to remember as we celebrate all our honorees, and the entire real estate community,” added Rudin.

In addition to Speyer and Schumer, five award winners will be recognized at the largest annual real estate networking event in New York City:

Elizabeth Stribling, Chairman of Stribling & Associates, will receive The Bernard H. Mendik Lifetime Leadership in Real Estate Award for her exceptional accomplishments in the profession, leadership, and service to the real estate industry over the course of her distinguished career.

Richard LeFrak, Chairman and CEO of LeFrak, will receive The Kenneth R. Gerrety Humanitarian Award, which recognizes a REBNY member’s meritorious service to the community.

Gene Boniberger, Senior Vice President and Director of Building Operations for Rudin Management Company, Inc., will receive The George M. Brooker Management Executive of the Year Award, which recognizes individuals of superior accomplishment in property management based on outstanding professionalism, civic achievement, and contributions to the real estate industry.

Ron Lo Russo, President of Cushman & Wakefield’s Agency Consulting Group, will receive The Young Real Estate Professional of the Year Award. This award is selected by the Young

Men’s/Women’s Real Estate Association of New York and presented to a member who exemplifies strong integrity, professionalism, and personal ethics.

REBNY advises that those wishing to attend the 122nd Annual Banquet should purchase their tickets early at https://www.rebny.com/banquet. Place your company’s brand in front of New York City’s political and business elite through sponsorship opportunities at the Annual Banquet and by advertising in REBNY’s 2018 Journal. Contact banquet@rebny.com to sponsor this event.

Rob Speyer is the President and Chief Executive Officer of Tishman Speyer. Over the past decade, he has guided Tishman Speyer’s growth into a leading global real estate investment management firm with assets under management in excess of $45 billion. Under his leadership, Tishman Speyer has delivered more than 36 million square feet of development and redevelopment across 30 markets, serving the needs of 2,300 industry-leading tenants around the world.

Speyer has served as REBNY Chairman since 2013 and will conclude his term in January 2018. He is also Chairman of the Advisory Board of the Mayor’s Fund to Advance New York City. Mr. Speyer serves on the Board of Trustees of New York-Presbyterian Hospital and St. Patrick’s Cathedral in New York City, where he was Co-Chairman of the Construction Committee overseeing its restoration and renovation. He is also a member of the Shanghai Mayor’s International Business Leaders Advisory Council.

United States Senator Charles Schumer has dedicated his career to being a tireless fighter for New York. From authoring a permanent tax credit to offset the rising costs of college tuition, to protecting Social Security and Medicare, and encouraging job-creating infrastructure projects, he has worked to successfully retain New York jobs that were at risk of leaving and to attract many new firms to New York to create many thousands of new jobs.

Today’s skyline can be traced back to Schumer’s 2001 “Group of 35” report urging the city to use its zoning, taxing, and condemnation powers to speed office construction particularly on the West Side of Manhattan in Midtown; in Long Island City, Queens; and in Downtown Brooklyn.

In 2016, Schumer was re-elected to a fourth Senate term and at the same time, his colleagues elected him to serve as Leader of the Democratic Caucus, the first time a New York Senator has held the position.

Elizabeth Stribling is the Chairman of Stribling & Associates and President of Stribling Marketing Associates. Since she founded the firm in 1980, it has grown to include four offices and over 300 agents across Manhattan and Brooklyn. As President of Stribling Marketing Associates, Elizabeth oversees sales and marketing efforts for a vast portfolio of new development offerings. She serves on REBNY’s Board of Governors and was previously honored with the REBNY Residential Brokerage Division’s Henry Forster Award for Lifetime Achievement for outstanding excellence, ethical conduct, and contributions to the real estate industry and community-at-large. Additionally, Elizabeth currently serves as Chairman of the French Heritage Society and on the Board of Directors for the Women’s Committee of the Central Park Conservancy, New York Landmarks Conservancy, and the American Hospital of Paris Foundation. She was previously a trustee of the Hewitt School and served on the Board of Directors for the Foreign Policy Association, Cambridge in America, the French-American Foundation, and the Institut Pasteur.

Richard LeFrak is Chief Executive Officer and Chairman of LeFrak, which owns more than 40 million square feet of real property across the United States. The 116-year-old firm’s portfolio is primarily focused on the New York Metropolitan area with significant interests in South Florida and the West Coast. The LeFrak Family and LeFrak charitable foundations have supported many philanthropic organizations and projects including the Guggenheim Museum, New York-Presbyterian Hospital, the American Museum of Natural History, Prospect Park, Barnard College, the New York Philharmonic, and the Metropolitan Opera. In addition to his service on REBNY’s Board of Governors, Richard has served on the Prostate Cancer Foundation’s Board of Directors and as Vice Chairman of the Board of Trustees for the American Museum of Natural History. He was previously a trustee of Amherst College and of Trinity School.

In 2016, Joanne Podell became the first broker in Cushman & Wakefield’s Retail Services division to receive the title of Executive Vice Chairman. With nearly 25 years of commercial real estate experience, extensive market knowledge and a client-focused approach, Podell continues to solidify her reputation as one of the most respected retail brokers in New York City. A three-time recipient of the prestigious REBNY Retail Deal of the Year Award, Podell was declared Cushman & Wakefield’s 2016 global top broker, the first time that a retail broker has been the sole recipient of such a recognition. Podell was named Cushman & Wakefield’s overall top retail broker in the United States for both 2014 and 2015. She is consistently ranked as one of the company’s top ten U.S. brokers across all service lines. Joanne serves as a member of REBNY’s Commercial Brokerage Division Board of Directors, Retail Committee, and Lower Manhattan Office Building Committee.

The George M. Brooker Management Executive of the Year Award

Gene Boniberger is Senior Vice President and Director of Building Operations at Rudin Management Company, Inc. where he has served since 1977 in various capacities including Chief Engineer and Building Manager for several properties, as well as Operations Manager and Vice President for Commercial Building Operations. Currently, Boniberger is responsible for the day-to-day operation of Rudin’s commercial and residential portfolio as well as the mechanical, electrical, and plumbing (MEP) aspects of all new construction projects. A leader in PropTech, Boniberger is the co-inventor of the Digital Building Operating System (DiBOSS) and NANTUM—a real-time building operating system/integration platform that provides a micro-suite of cloud-based applications for building owners and operators developing sustainability strategies—by Internet of Things (IoT) startup Prescriptive Data launched by Rudin in 2015. Boniberger is a board member for LiveOnNY and Donate Eight, an affiliate of LiveOnNY, and co-chair of the #REBNYTech Committee. He was previously honored with REBNY’s Residential Management Community Service Award and serves on REBNY’s Management Division Board of Directors, Commercial and Residential Management Councils, and Sustainability Committee.

The Young Real Estate Professional of the Year Award

Ron Lo Russo serves as President of Cushman & Wakefield’s Agency Consulting Group. Mr. Lo Russo’s leadership experience and background in agency leasing drives new business opportunities for the firm by creating and executing strategies for leasing campaigns. Formerly, Mr. Lo Russo served as President of the Tri-State Region, where he oversaw all facets of operations and performance of the 15 regional offices throughout New York, New Jersey, and Connecticut.  Prior to joining Cushman & Wakefield, Mr. Lo Russo spent 16 years with Vornado Realty Trust—seven of these as Vice President of Leasing for the New York Office Division—where he oversaw a portfolio of commercial real estate transactions totaling more than 6.5 million square feet.