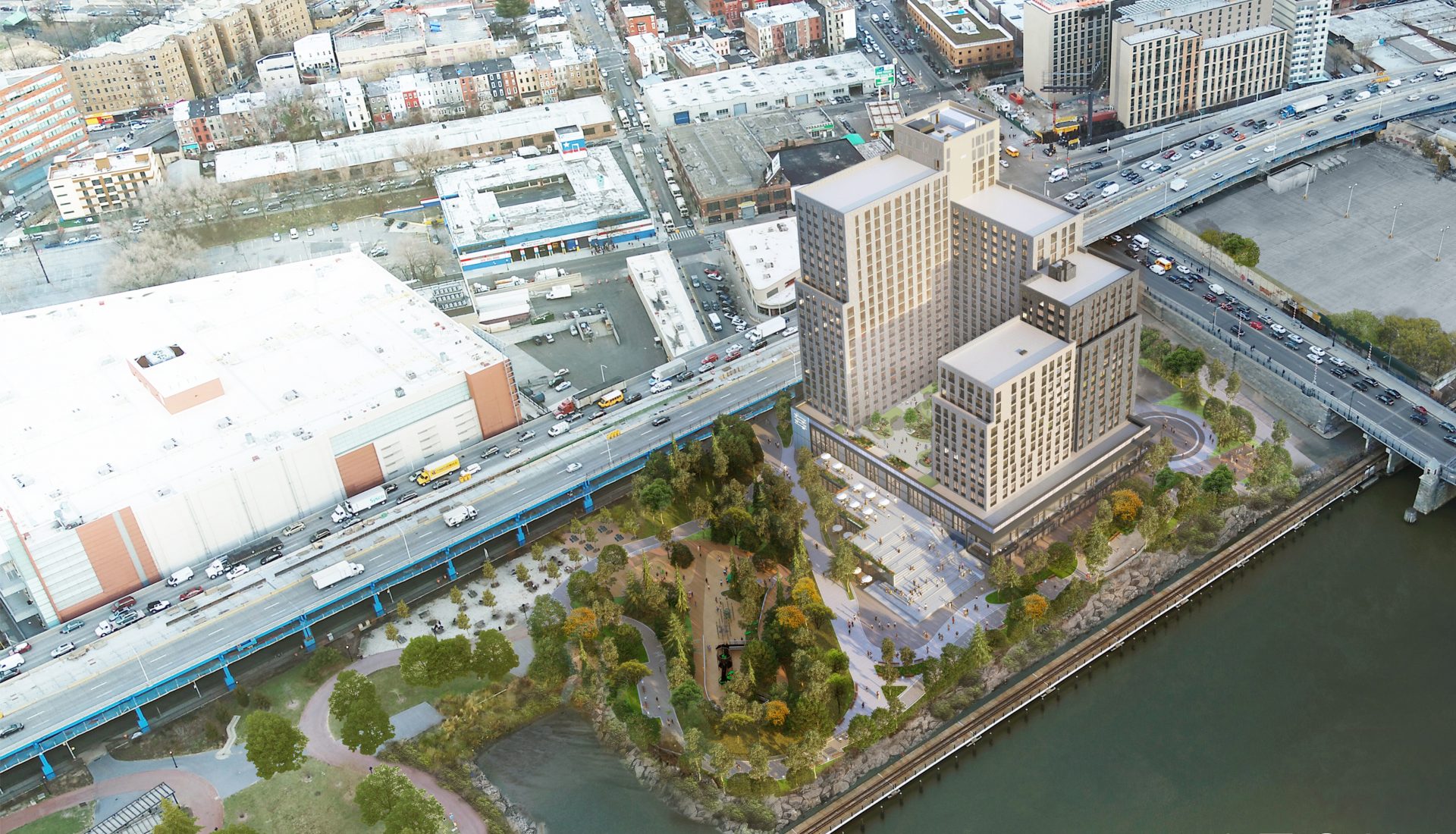 A public-private partnership of L+M Development Partners, Type A Projects, BronxWorks and the City of New York has closed on a nearly $350 million finance package for the first phase of the new Bronx Point development on the Harlem River waterfront.

Located on city-owned land near the 145th Street Bridge, the mixed-use development will transform a dirt tract into a new community of over 1,000 affordable apartments with three-acres public open space and cultural and community-focused spaces that include a permanent home for the Universal Hip-Hop Museum, an early childhood space and outdoor science programming .

Work is already underway at the site, one of the largest remaining city-owned parcels of land in the Bronx, and phase one is expected to be ready by late 2023.

“This public-private partnership will deliver high quality affordable housing, a beautifully restored esplanade connecting the community to the waterfront, and a unique cultural institution that highlights the historic contributions the vibrant South Bronx community has made to music,” said Deputy Mayor for Housing and Economic Development Vicki Been.

“Community-based projects like Bronx Point are critical to this Administration’s goal of bringing affordable housing & investment to communities that have been historically left behind.”

In addition to meeting a 35 percent M/WBE participation goal, the development team will participate in HireNYC. In 2016, New York City Economic Development Corporation (NYCEDC) and HPD released a Request for Expressions of Interest for the Bronx Point site and selected the L+M/Type A/BronxWorks partnership in 2017 upon the completion of the site’s rezoning.

S9 Architecture led the design of the 22-story apartment building, and the open space was designed by Marvel Architects in collaboration with Abel Bainnson Butz.

The design has already won an Award for Excellence in Public Design from the New York City Public Design Commission in recognition of its potential to serve the Lower Concourse community. The Waterfront Alliance also named Bronx Point the first affordable housing project in the country and just the ninth overall to achieve verification for excellence in waterfront design through its Waterfront Edge Design Guidelines, a rating system to manage coastal climate risks and create resident, ecologically sound and accessible waterfronts widely accepted as the gold standard across a range of industries.

Bronx Point is a key component of a $194 million capital investment strategy for the Lower Concourse neighborhood, announced by the de Blasio Administration in 2015 and led by NYCEDC. For more than two years, the development team and NYCEDC engaged extensively with the local community, including hosting open space design workshops and additional working group sessions with an array of local stakeholders. In the end, community members were able to directly influence the design and programming of the project’s open space and provide a range of ongoing feedback as the project progressed.

The development’s central cultural component will be the first permanent home of the Universal Hip Hop Museum, just down the river from the widely recognized birthplace of hip hop at 1520 Sedgwick Avenue. The museum, which currently has a pop-up space at the nearby Bronx Terminal Market, is dedicated to celebrating and preserving the history and culture of the genre. The Universal Hip Hop Museum will be home to exhibits, events and performances and other celebrations highlighting the rise of hip hop as a global force, all from the borough where the genre was born.

The apartments will be available for families earning incomes ranging from 30 percent to 120 percent of Area Median Income, along with apartments for the formerly homeless. Apartments will include 135 studios, 192 one-bedrooms, 122 two-bedrooms and 93 three-bedrooms. Tenant amenities will feature an outdoor terrace for residents, on-site laundry, a children’s room, community lounge, bike storage room, on-site fitness center and around-the-clock front desk security.

Public space is also a central feature. A grand staircase, designed to be a civic gathering space for the borough, will lead from the building itself down to the waterfront. The open space, across from Bronx Terminal Market, will feature a playground and landscaped area adjacent to the existing Mill Pond Park and the Bronx Children’s Museum to the north.

An esplanade along the Harlem River shoreline will include a landscaped public walkway and seating areas. The space will also feature lawns, waterfront lookouts, an extended BBQ area, fitness zones for adults and publicly accessible bathrooms. Collectively, these open space improvements will advance the City and community’s long-standing goal of providing access to the Harlem River waterfront and increasing public open space in the South Bronx.

Bronx Point will also include several spaces for youth and community programming and education. Development partner BronxWorks, a social service provider, will provide supportive services for tenants on the site and operate an early childhood center. At the same time, the Billion Oyster Project will run an outdoor education program that utilizes the Harlem River.

The Prusik Group, L+M’s partner on Essex Crossing on the Lower East Side and the new National Urban League Headquarters in Harlem, will serve as the project’s Retail Development Advisor.

Along with the Bronx Children’s Museum, Hostos Community College and Bronx Terminal Market, Bronx Point is within walking distance of borough institutions like the Bronx Civic Center district and Yankee Stadium, along with subway stations for the 2, 4, 5, B and D lines.

“It’s been an honor to be part of an incredible team that spearheaded a project we believe the community will truly be proud of. Being born and raised in the South Bronx, it’s particularly meaningful,” said Josue Sanchez, Senior Director at L+M Development Partners.

“At a moment when New Yorkers continue to struggle through the impacts of the pandemic, it’s even more critical for us to begin work on a project that will serve so many in a way that’s true to the borough – from high-quality affordable housing and community programming, to much-needed open space along the Harlem River, to a permanent home for the Universal Hip Hop Museum. Thank you to our partners at the City, State, and Wells Fargo for their extraordinary hard work and dedication in helping us reach this milestone through a true public-private partnership.”

Annie Tirschwell, partner at Type A Projects, an NYC-certified Women-owned Business, added, “Initiatives like this are essential building blocks for a more equitable and inclusive city for all. We value our partnership with L+M and were honored to bring our commitment to inclusive and community-centric planning to what will be a transformative project for the South Bronx. ”

“The start of construction of Bronx Point is a tremendous milestone for our borough,” said Bronx Borough President Ruben Diaz Jr. “Not only will this project create much-needed affordable housing units, it will activate underutilized space, open up more waterfront to public access, create new public spaces and retail amenities for community use and, finally, bring the Universal Hip Hop Museum to the birthplace of hip hop, The Bronx. Thank you to everyone who came together to make this project come to life.”