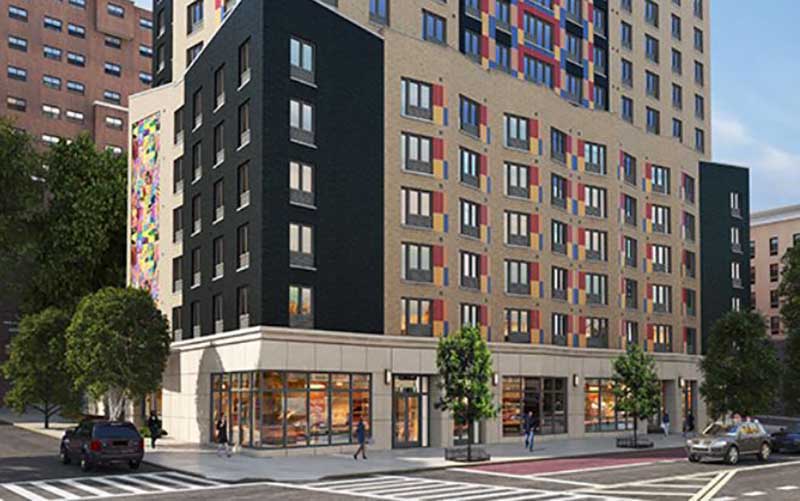 Construction is anticipated to start in January 2021.

Twin Parks Terrace is a new construction project which will consist of 181 affordable rental units and one superintendent unit on Webster Avenue between East 183rd Street and East 184th Street in the Fordham Heights section of the Bronx.

The project site is currently a parking lot adjacent to the Twin Parks West Houses development, which underwent a conversion in 2018 through NYCHA’s Permanent Affordability Commitment Together (PACT) program.

“Today’s announcement is just the latest example of the Authority’s commitment to creating affordable housing at a time when communities across New York City have a dire need for it,” said NYCHA Executive Vice President for Real Estate Development Jonathan Gouveia. “We look forward to working with our many partners to make this exciting project a reality.”

The 14–story, 182–unit Twin Parks Terrace project was designed by Danois Architects and will be developed by Settlement Housing Fund and Joy Construction.

The residential units will be affordable to residents from 30% to 80% of the Area Median Income (AMI) for a period of 99 years, with 46 units set aside for homeless households. NYCHA residents will be given preference for 34 of the total units available.

Amenities include a laundry room, outdoor playground, meeting rooms, children’s playroom, recreation room, fitness room, and bike storage. Solar photovoltaic panels will be positioned on the roof. The project also boasts a mural partnership with Groundswell, a group that implements a community process to design a mural focused on a social justice issue with a local artist. The mural will be painted by neighborhood children. The development team will work with BronxWorks to train NYCHA residents in relevant construction skills and hire residents throughout the construction process.

NYCHA has been churning out projects under the its Permanent Affordability Commitment Together (PACT) program to repair and preserve more than 4,400 units in Brooklyn, Manhattan, and the Bronx.

By allowing developers to build on its land, the Authority is aiming to unlock the funds necessary to address critical repairs and social service needs for more than 10,000 residents living at NYCHA campuses across the three boroughs. NYCHA enters into ground leases with the developers, who become the property managers responsible for all maintenance and upgrades while the property remains affordable.