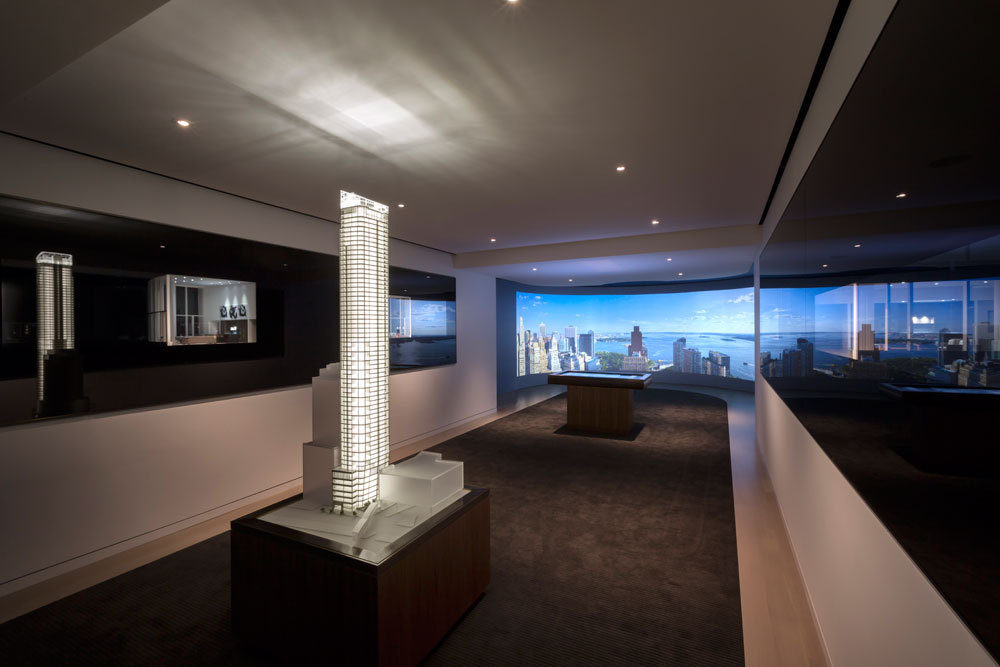 Beyond the balcony of this Miami Beach penthouse, behind beaches lined with palm trees, the Atlantic Ocean glistens in the dark.

Inside, a fire is crackling. A quick stroll through the apartment reveals a spacious kitchen, a bowl of fruit placed on the counter, and a bedroom with a magnificent four-poster bed.

The images are clear enough to make you think they are real — but they aren’t quite.

The apartment is a virtual replica on a TV screen that is navigated like a video game with the help of a joy stick.
The apartment actually exists and is for sale. But for those unable to visit it, this interactive replica in a Manhattan showroom gives a pretty good idea of what the place is like.

ArX Solutions, the program’s designer, has recently begun marketing the program to developers and brokers of luxury condos in New York City and across the world. The firm is only one example of a growing number of tech companies venturing into virtual-reality real estate marketing.

While technology has played an important role in sales marketing for decades, recent advances in interactive technology have turned the field upside down.

As technology begins to revolutionize residential sales, luxury new development is gradually diminishing its traditional disadvantage over existing properties: the inability to visualize. For New York’s developers, the implications could be tremendous.

He explained that the firm now routinely employs tech agents alongside designers to outfit its sales offices. “When I started 12 years ago, that wasn’t a role,” he added.

Perhaps the biggest game changer for new development marketing is Oculus Rift, a virtual-reality display that is worn like a pair of goggles.

The product, developed by California-based Oculus VR, won’t hit the market until 2015, but real estate tech firms are already working with prototypes to produce what are in essence walkable, 3D renderings.

ArX Solutions, for example, has developed its interactive software for Oculus Rift. So far, the images in the headset are a lot more blurry than on the TV screen and gave this reporter a slight headache, which the developers explained with the fact that both the program and Oculus Rift are still being developed.

But imperfections aside, Oculus Rift offers tremendous opportunities, which explains why numerous firms are currently trying to harness the technology for real estate sales

Douglas Elliman’s Albino believes in the potential of the technology, although he cautions it still needs to improve its visuals. “Especially at the highest price point, you want images to be very polished,” he said.

“It is clear that they will be revolutionary, but so far what we’ve seen hasn’t gotten there yet. But the evolution is very rapid.”

Beyond virtual reality, less eye-popping technology has made in-roads into sales offices over the past years.

Once prospective buyers pick an apartment on a touch screen, the chosen unit lights up in a model of the tower, while the views from its windows are projected on the surrounding walls. It’s not quite virtual reality, but it comes close.

Javier Lattanzio, 50 West’s sales manager, said the technology has made it easier for people to visualize the apartments, helping Time Equities sell a significant portion of the project’s units long before construction is completed.

New development has grown exponentially as a share of Manhattan’s high-end residential market in recent years. Glassy apartment towers are sprouting in all corners of Manhattan.

Of the $32.9 billion REBNY expects to be spent on new construction in New York City, a staggering $11 billion falls to luxury apartments. Price growth in the top ten percent of the residential market has consistently outpaced the rest by a wide margin, according to Miller Samuel’s quarterly reports for Douglas Elliman.

The boom in luxury new development means a growing number of developers are dependent on selling high-end units. But this has traditionally been difficult. After all, who would fork out tens of millions of dollars for an apartment if they don’t know what it looks like? In order to make up for this disadvantage, developers have spent fortunes on renderings and advertising films.

Last year, Macklowe Properties spent a staggering $1 million on a four-minute advertising film for its luxury tower 432 Park Avenue. According to the New York Times, the movie took six months to make.

Virtual reality is the next logical step in that development. Once it overcomes its early glitches, the technology has the potential to all but make up for the disadvantage new developments face compared to their already built peers.
After all, who needs to walk through an apartment if you can stroll through an exact virtual replica? кредит на карту