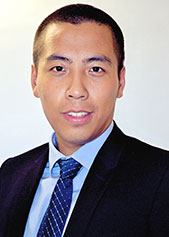 Allen Wu, a native of Shanghai, is a young gun at Fenwick Keats Real Estate.

He has made so much noise already during his brief time with the brokerage that he captured the Stonehenge Summer Broker Challenge this year, an honor that carries a $10,000 reward to accompany the prestige.

“I was trying to get a job (in) the psychology field,” Wu said, admitting that real estate was not his original goal after he graduated from the City College of New York in 2013.

“I saw a show, which was Million Dollar Listing New York,” he said. “It inspired me a lot.”

As he began to find success in luxury rentals, Wu soon “found out (psychology) was not a best fit,” and that perhaps he could really thrive in the luxury residential jungle that he saw playing out before him on television.
The reason for his success is simple. Wu knows his market.

As a child, his parents moved the family across the globe so that they could settle in New York and enjoy all the advantages and opportunities that the city has to offer.

He knows firsthand what it is like to be in a new country, balancing all of the normal trials and tribulations that young people navigate while also assimilating to a new language and a new culture.

“Mostly, my clients are students, international students,” Wu said. “They need someone to help them. “Because they are new to the country, it’s more convenient to work with people speaking the same language.”

Wu estimates that his client base is almost entirely Chinese with some customers from other Asian countries.

His ability to connect with that very specific but deep sub-demographic has allowed him to develop a lead pool that many young brokers do not wield until much later in their careers.

While the broker has plans of expanding his metaphorical rolodex — and is certainly open to working with a much more diverse client list — Wu is taking advantage of his unique skill set.

“It’s my heritage,” he said, noting that the main reason for his family’s move to the United States was to give their son an opportunity to receive a better education.

Although Wu is typically finding residences for students, in reality he is selling to the parents who are looking to provide comfortable living arrangements for their children.

“Once I establish those renters, young people, they’re going to stay here for a long time,” Wu said. “I try to establish a relationship with their parents.”

The theory is to earn the trust of both the parents — who have capital now — and the children, who will potentially turn their top tier education into capital later.

Wu said that his wealthy clientele is inclined to buy their child’s first home after a period of renting.

Due to their increased buying power as compared to that of a recent grad, Wu will have already cultivated a valuable professional relationship with buyers searching for higher-priced listings.

But how does he find the incoming students from across the ocean?

Via a blog that is written in his native language, Wu connects with his target audience by posting content about what is currently available in New York.

“Back in college, when I was majoring in psychology, I did research on how social media impacts people’s lives,” said Wu.

It’s no secret that a digital presence is extremely important in all marketing and sales endeavors, but in this particular instance, Wu is able to connect with potential clients who may not even be actively looking for brokers yet. He updates the site’s content every day.

It’s a unique strategy that has kept him ahead of the curve and it has also helped him to determine exactly what his customers want.

“They think about safety,” said Wu, stressing the importance of a doorman, especially to the parents who are bankrolling the residences.

The students also want views that many renters their age may not yet be able to afford, and easy access to subway stations.

While his situation is a bit unique, Wu is quick to concede that he wouldn’t be enjoying the success that he already is without a quality support system behind him.

“My company is really supportive, everybody is friendly,” said Wu. “Especially the managers. They have a time for you if you have any questions. They’re really helpful. It’s like family you know.

“I was looking at different firms when I was starting and eventually I chose Fenwick Keats, I made a good decision.”
Wu will continue to ride his tailor-made corner of the market to a bigger and better portfolio of clients, but this one specific niche has certainly given him a leg up on his peers.