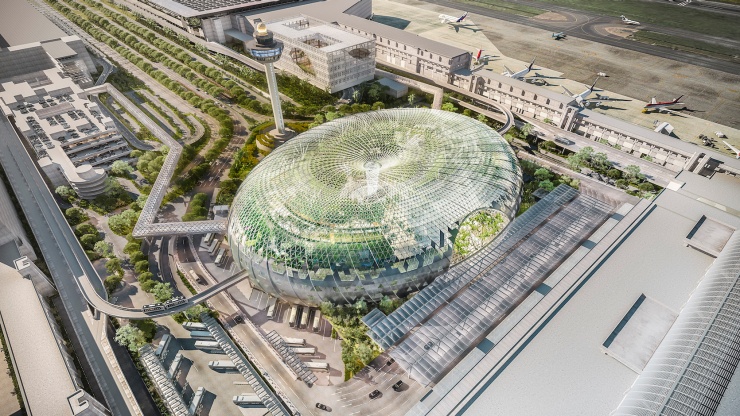 Governor Andrew M. Cuomo announced the Port Authority is issuing a Request for Information for the design and development of JFK Central, a 14-acre, mixed-use space at the epicenter of the redeveloped John F. Kennedy International Airport.

ThE new site offers a blank canvas to create a commercial and recreational public space to serve travelers and employees, and capitalizes on the broader transformation of JFK currently underway.

“Airports are the front door to New York which is why it is so important that we transform JFK Airport into an innovative, modern, and accommodating space for domestic and international travelers,” Governor Cuomo said.

“We are moving ahead with a $13 billion transformation plan that will fundamentally reimagine the airport for the 21st century and, as part of that effort, JFK Central will create a more unified airport and further solidify New York’s position as the premier entry point into our country for the rest of the world.”

The release of the RFI is the latest step in Governor Cuomo’s $13 billion vision plan for the future of JFK, unveiled in October 2018.

ThE record investment, 90 percent of which is private funding, calls for a unified and interconnected airport featuring two new international terminals with state-of-the-art passenger amenities, convenient ground transportation options, and simplified roadways that will enable the airport to accommodate an expected increase of at least 15 million passengers per year.

“We are making significant investments to JFK Airport and airports across the state to enhance and modernize the travel experience,” said Lieutenant Governor Kathy Hochul.

“As part of our transformation of JFK, plans for a mixed-use space will provide commercial and recreational opportunities to create additional jobs and better serve travelers. The modernization of the airport is part of our overall efforts to ensure easier and safer travel, increase the tourism industry in New York, and strengthen our economy for generations to come.”

The RFI will seek input from firms that specialize in designing, developing, and operating multi-use commercial developments or large-scale public spaces. Modern airports around the world, including those in Amsterdam, Zurich, and Singapore, will serve as examples for this project, as those facilities have successfully built and maintained mixed-use spaces that serve airport communities in similar ways to the proposed JFK Central infrastructure.

Potential uses at JFK Central include retail and dining, including pop-ups and food trucks; office space; and recreational and cultural offerings and events for airport passengers and employees.

Built on top of the brand-new Ground Transportation Center, JFK Central would be a highly visible public space located in the middle of JFK Airport, seamlessly accessible from the new Terminal 1 and Terminal 4 in the southern half of the Central Terminal Area, and serving all airport passengers and employees.

The Governor’s JFK Vision Plan — initially unveiled in January 2017 and based on the recommendations from the Governor’s Airport Advisory Panel — calls for an overhaul of the airport’s hodgepodge of eight disparate terminal sites into one unified JFK Airport by: demolishing old terminals; utilizing vacant space; modernizing on-airport infrastructure; and creating a multi-tiered cargo modernization program, while incorporating the latest in passenger amenities and technological innovations.

The Vision Plan also calls for increasing the number and size of gates, improving parking availability, an array of airside taxiway improvements to allow for bigger planes and reduced gate congestion, upgrading the AirTrain JFK system to handle increased passenger capacity, and enhanced roadways on and off the airport. This includes better access to JFK from regional roadways.

The New York State Department of Transportation has targeted $1.5 billion in highway improvements designed to ease bottlenecks, particularly at the Kew Gardens Interchange with the Van Wyck Expressway and on the notoriously congested Van Wyck as well.

This past February, Governor Cuomo announced that American Airlines and British Airways will invest $344 million in JFK’s Terminal 8 to expand and improve the customer experience.

In March, the Governor announced opening of a new community outreach office in Jamaica, Queens, which will serve as the central resource for job and contracting opportunities to local residents.

The second phase of a multi-tiered cargo modernization plan is also underway with the signing of a long-term lease with JFK Air Cargo LLC to develop a state-of-the-art handling facility at the airport.

And in May, the historic TWA Hotel opene. JFK’s first on-campus airport hotel was developed by the real estate development company MCR through a public-private partnership.

JetBlue and JFK Millennium Partners are constructing a $3 billion, 1.2 million square foot new terminal on the airport’s north side that will connect to the airline’s existing Terminal 5.

Another new $7 billion, 2.9 million square foot terminal on the airport’s south side will occupy the area where the existing Terminals 1 and 2 are located, in addition to the area left vacant when Terminal 3 was demolished in 2014.

The new south side terminal will be developed by the Terminal One Group, a consortium of four international airlines — Lufthansa, Air France, Japan Airlines and Korean Air Lines.

NEW DEVELOPMENT: Market gets a taste of Milk Factory