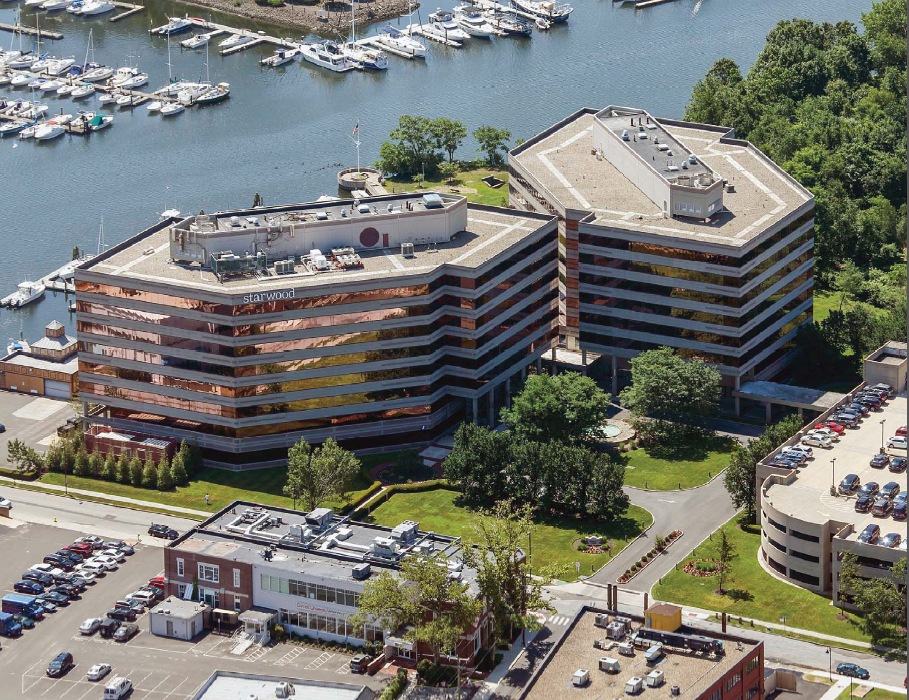 Building and Land Technology announced that Starwood Hotels & Resorts Worldwide, Inc. has signed a new 430,000 s/f, 20-year lease for its expanded global headquarters at One StarPoint in Harbor Point.

Carl R. Kuehner III, CEO of Building and Land Technology, owner and developer of Harbor Point, the mixed-use waterfront development in Stamford where One StarPoint is located, made the announcement, together with Kenneth Siegel, chief administrative officer and General Counsel of Starwood.

Starwood, one of the leading hotel and leisure companies in the world with nearly 1,200 properties in 100 countries, relocated its global headquarters to Connecticut in January 2012, bringing more than 800 jobs to Stamford.

The new lease will enable Starwood to accommodate 1,320 jobs at One StarPoint versus at one of Starwood’s other locations.

The State of Connecticut provided Starwood with tax credits and financing incentives in support of the company’s plans to expand and add the additional jobs.

companies here and BLT’s vision to create a waterfront masterpiece,” said NGKF Vice Chairman Neal Golden, who represented the company with Ross Perlman, senior managing director at NGKF. “The other half is Starwood’s demonstrated efforts to be a pioneering stakeholder in up-and-coming destinations worldwide.”

The master-planned development by Building and Land Technology offers Class A office space to attract and retain major corporations, as well as residential and retail space to create a 24-hour live/work environment that appeals to the modern workforce.

“We remain focused on attracting major corporations to Connecticut,” said Mr. Kuehner, who has overseen the development of Harbor Point into a successful modern waterfront mixed-use project, built on former industrial land that sat dormant for decades.

“Corporations like Starwood drive our region’s economic growth, so we strive to meet their needs and make it an easy decision to locate here at Harbor Point.”

Constructed in 1989 and renovated in 2011, One StarPoint is a 430,000-square-foot Class A office property consisting of two towers.
Starwood currently occupies 300,000 square feet, and under the new lease will be able to expand into additional space as it becomes available.

One StarPoint also benefits from its waterfront location, offering views of Long Island Sound as well as a 32-slip marina on site. Other amenities included two private fitness centers, a 140-seat cafeteria, and shuttle service to the Stamford Transportation Center, just a short ride away.