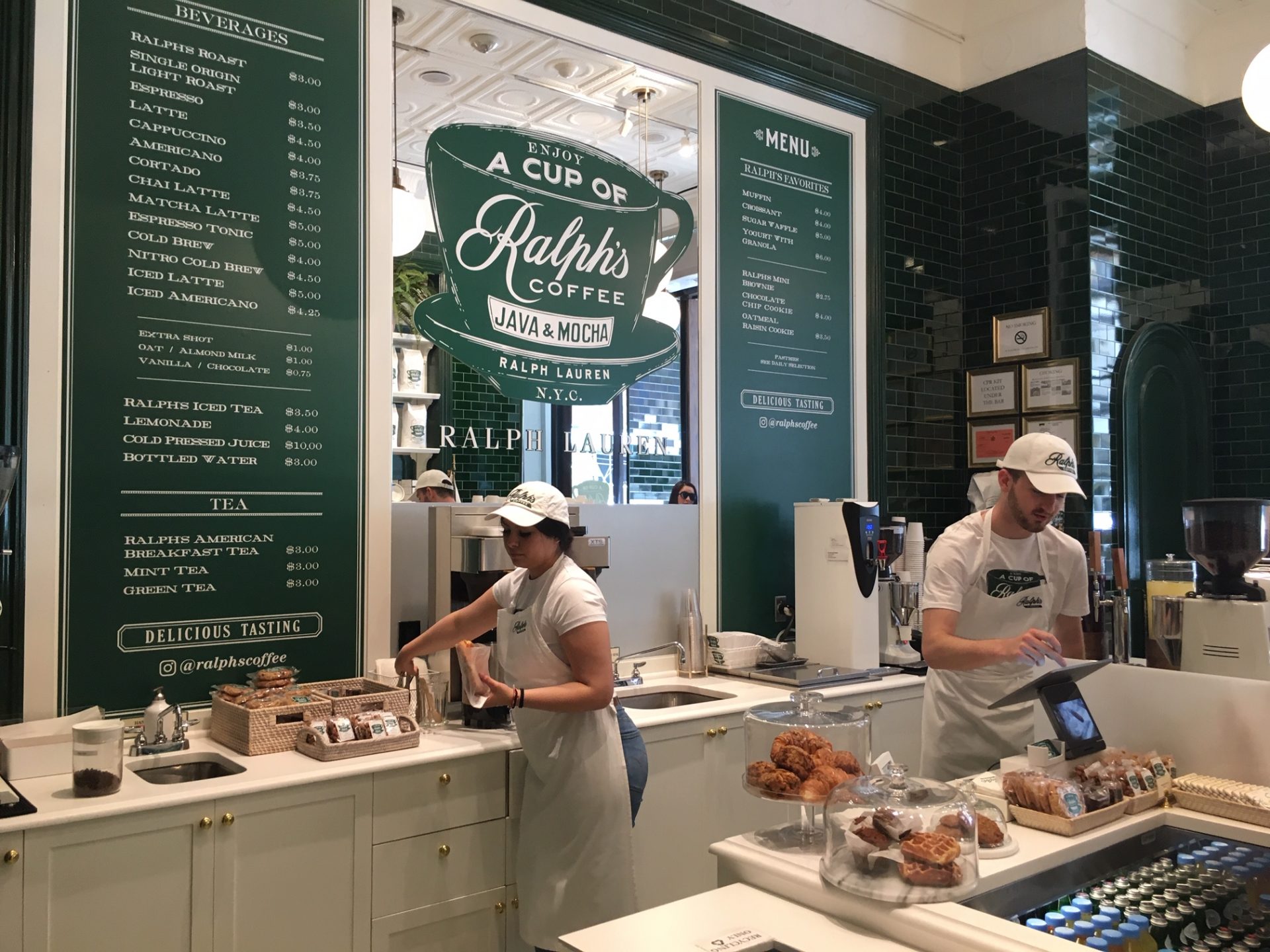 Retailers asking: If you feed them, will they come?

When one café door closes, another one opens.

Only this time, the neighborhood coffee joint that closed, Flatiron’s Toby’s Estate was replaced by the high-fashion alternative, Ralph’s Coffee, a venture owned by Ralph Lauren luxury apparel corporation.

Ralph’s isn’t the first coffee bar to be opened by the clothing company; it first expanded into hospitality 20 years ago, with the RL Restaurant adjacent to the company’s flagship store in Chicago.

Then came the equestrian-art outfitted Polo Bar attached to the clothing store in midtown Manhattan.


Ralph’s Coffee’s newest brick-and-mortar location at 160 Fifth Avenue near 21st Street opened about two months ago and shares space with Club Monaco, which is owned by Ralph Lauren.

Customers are free to bring their cold brews or organic teas right into the clothing shop and, according to Ralph’s Coffee manager Sam Peralta, so far this has worked out fine, with no spills or splashed shelves to report.

Peralta insisted the brand’s coffee venture “is more about passion” than the trend of experiential retail the sector has recently waded into as it competes with e-commerce.

After all, the Polo Bar opened in 2014, and, said Peralta, “It’s done amazing. The brand is not just clothing, but food and beverages.”

So far, the manager added, residents of Flatiron have had kind words for the brand that’s replaced the former coffee joint, Toby’s Estate (recently rebranded Partners).

“We’re adapting to what guests want,” said Peralta, noting that most people who step through the doors aren’t aware of Club Monaco’s shared ownership with Ralph’s. But the company is certainly focused on getting them acquainted.

Not long after moving in, Ralph’s sent gift baskets to companies at neighboring buildings, which also included cookies baked on site at the Polo Bar. “We’re getting familiar with the new clientele,” said Peralta.

As for whether the coffee and food has helped the company’s fashion sales, it’s too soon to say for the new Ralph’s.

Retail real estate industry professionals, however, are betting that a little caffeine buzz is just what businesses need to reclaim elusive brick-and-mortar customers.

Crate and Barrel is the latest company to jump on the bandwagon with The Table at Crate, a full-service restaurant in Chicago. The restaurant, naturally, is designed to showcase the kitchen tools and tableware sold at the store while serving a menu featuring ingredients sourced from local farms.

In New York, the concept was already in play at the Meatpacking District’s Restoration Hardware RH rooftop bar.


Adelaide Polsinelli, vice chair of investment sales at Compass, believes the move was the right one for the store.
“It’s activated the space; it’s a meeting hub,” she said. “Who would have thought of Restoration Hardware and food? But it’s another way of generating money and making it Instagrammable. It’s building brand loyalty and if there’s an advertising budget, that’s probably part of it. It creates brand awareness.”

Joshua Berger, managing director of Norman Bobrow & Co., believes that the café component is likely to be more than just a passing trend for brands.

“It might switch from coffee to something else,” he said, noting that coffee bars in and of themselves have become something of an oversaturated market. “They might host more outside vendors to bring in new people because people are going to stores a lot less these days and going online.”

According to Berger, fashion is an especially good example of what would work alongside a coffee bar.

“We saw it a few years ago with bookstores,” said Berger. “Even if they’re not shopping, they’re going to say let’s meet at Ralph Lauren and have coffee.”

Additionally, coffee bars are already a workspace for many people, and the potential demand for a coffee bar as a workspace could grow if there’s a downturn or slowdown in the co-working market.

“It’s an experiment that’s worth investing in,” Berger said. “But it’s not a decision (by a commercial tenant) that’s made flippantly. It requires a whole redesign and plumbing and that’s quite expensive.”

Jedd Nero, principal and executive managing director of New York City retail at Avison Young, expects that more retailers will start incorporating coffee and other experiential features. It’s just that many business owners, despite being interested, haven’t figured out how yet. And it’s still unclear exactly how much it helps the primary business.

“There’s a difference between experiential and experimental and today everyone is experimenting with different concepts,” said Nero. “It’s about the customer experience, but that’s been around forever. Retailers have to find the right balance and the key is making it as convenient and seamless as possible (between brick-and-mortar and online) so you’ll be hitting the customer wherever they go. It’s creating a business that brings people in the store. Friendly employees, fast checkout, good smells, good music, AC…”

While at one time, a high-end shop’s exclusive appearance might have been seen as a sign of a business’s strength, Nero believes that business model is at odds with today’s social media loving consumers.

He said, “There’s too much competition from online. Especially if there’s a big security guard standing at the door, you’re going to think this place is too expensive for me.”

Adding a coffee bar, juice bar or even fitness classes (as Lululemon offers), he reasoned, lessens the intimidation factor. “It’s bringing people into the store that before wouldn’t have gone in.”

What he also expects is that brands, while focusing on the retail spaces as showrooms, will choose to occupy fewer of them. “That’s where they have to find their balance,” he added.

“The challenge that retailers have today is you can’t be everything to everyone, but what you’re going to see is they are more aware of who the customer is, because people are hanging out after their purchases, whether it’s at a coffee bar or a real bar.

“I think these are incredible times. This is an entrepreneurial moment. This is the rebirth of retail.”