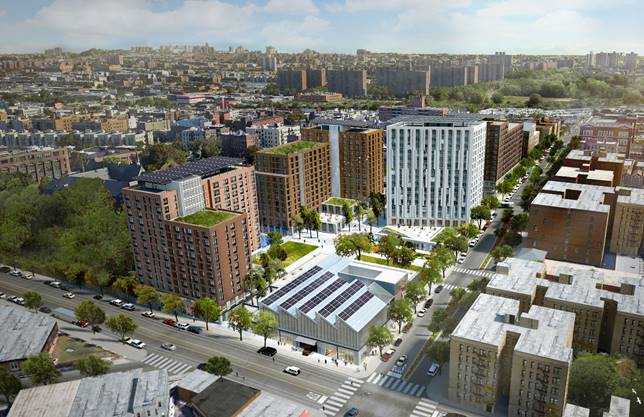 Work is set to start on transforming the site of a form Bronx jail into a 700-unit affordable housing development.

The Hudson Companies and Gilbane Development are partnering with the city to build the first residential phase of the Peninsula on land once occupied by the Spofford Juvenile Detention Center.


“We took pride in demolishing the Spofford Juvenile Detention Center earlier this year, which long stood as a symbol of fear in the South Bronx and devastated the lives of so many of the community’s young people,” said Aaron Koffman, Principal at The Hudson Companies.

“Today we celebrate a new day filled with promise, hope, and opportunity for this same site with 183 sustainable, affordable homes for area residents and well-paying jobs to bring brighter futures to Hunts Point. ”

The Peninsula will be a 100 percent affordable mixed-use development that will ultimately bring more than 700 units of housing, open space including a new public plaza, light industrial business opportunities, arts-oriented community facilities, and ground floor retail to the Hunts Point neighborhood.

The developers are partnering with the Department of Housing Preservation and Development (HPD), Housing Development Corporation (HDC), and New York City Economic Development Corporation (NYCEDC) and MHANY Management Inc. on the first residential phase of the Peninsula, which will include 183 units of deeply affordable housing – studios to three-bedroom units – for extremely low-, very low-, and low-income New Yorkers.

An additional 10 percent of the units will be set aside for formerly homeless individuals. The first residential phase is expected to be completed in 2021.

“The rebirth of the abandoned Spofford Detention Center, which has been a looming symbol of despair for years, is a prime example of the type of investments the City is making to generate better outcomes for communities and residents,” said HPD Commissioner Louise Carroll.

The Peninsula is being hailed as a cutting-edge industrial-commercial-residential project, embedding manufacturing jobs, health and wellness resources, and cultural arts work space to be operated by SpaceWorks.

It will have 56,000 s/f of light industrial space, including a kitchen step-up space for food business entrepreneurs, 53,500 s/f of community space, including a day care center, and artist workspace, and 17,000 s/f of ground floor retail space. It will have an on-site educational facility offering career-readiness programming, as well as below market rent workspace to local entrepreneurs.

The $121.5 million residential phase one of the Peninsula was financed by HPD and HDC. The construction loan will be serviced by Wells Fargo Bank, which is also the Low Income Housing Tax Credit equity investor. The land is being conveyed to new ownership under a ground lease with the City facilitated by EDC. The project was designed collaboratively by WXY Architecture + Urban Design and Body Lawson Associates.