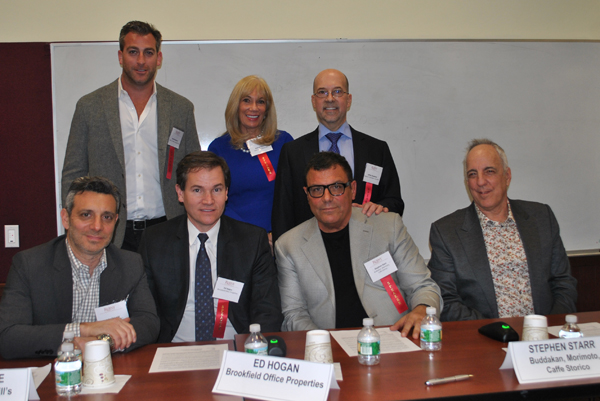 Red tape and runaway rent eating away at restaurant biz

Fast casual, fine dining, home-style, Ethiopian, Japanese, take-out, all-you-can-eat, Michelin-starred, vegetarian, barbecue, disco-themed: restaurants vary more than the people who eat in them.
Restaurant owners have a similarly wide range of attitudes towards their real estate dealings. This fact was on display at a panel event the Real Estate Board of New York hosted for members last week, titled “The Art of Making a Restaurant Deal in NYC.”

“When I came into New York I knew I had to do it big,” said Stephen Starr, a Philadelphia restaurateur who opened two restaurants in Chelsea, Buddakan and Morimoto, simultaneously. “I couldn’t come in as a little Philly boy.”

But Michael Weinstein, creator of the Bryant Park Grill, Clyde Frazier’s, and El Rio Grande, indicated that he might not ever open another restaurant in Manhattan, because he seeks out opportunities in underserved markets.

“We like to find areas where there’s very little going on in retail and make something that’s really great,” he said. Clyde Fraizer’s, for example, opened at a time when Hell’s Kitchen was relatively unknown.

Mark Birnbaum, of Catch, La Cenita, and Lexington Brass, had his own twist on location. With the advent of technology such as online maps, social media and internet-based review sites, he said, restaurants no longer need a ground-floor location to attract business. Rather than paying ground-floor rents on par with Sephora and the Apple Store in the Meatpacking District, he has come to embrace second-floor restaurants.

“We enjoy the elevator ride to an arrival moment,” he said.

Rounding on the restaurant owners on the panel, John DeLucie, founder of The Lion, Crown, and Bill’s Food & Drink, said that he is more concerned with the character of the building.

“Not one of the buildings our restaurants are in is less than 100 years old,” he said.

In his lease negotiations, DeLucie said, rent was often the easiest part of the discussion.

“The landlords are very involved and they’re very careful,” he said. “It really wasn’t about the rent.”
Ed Hogan, director retail leasing for Brookfield Office Properties, was the lone landlord in the group.
“The right restaurant sets the tone,” he said. “All the retail on the ground floor sets the tone for the whole building.”

Brookfield has signed a number of small, local businesses for the food court in Brookfield Place Downtown. Hogan described the rational for signing relatively unknown brands.
“They weren’t necessarily the best credit, but they were a great chef and a great businessperson who could do a great volume,” he said.

While the panelists differed in their approach to their business, they shared very similar concerns about the future of New York as a place for innovative restaurants. Community Boards, health inspections and labor laws, as well as sky-high rents, make it hard for restaurants to survive.
“One sad thing that’s going to happen is young people with great ideas – innovators – won’t be able to do cool new things,” Starr said. “And that’s bad.”