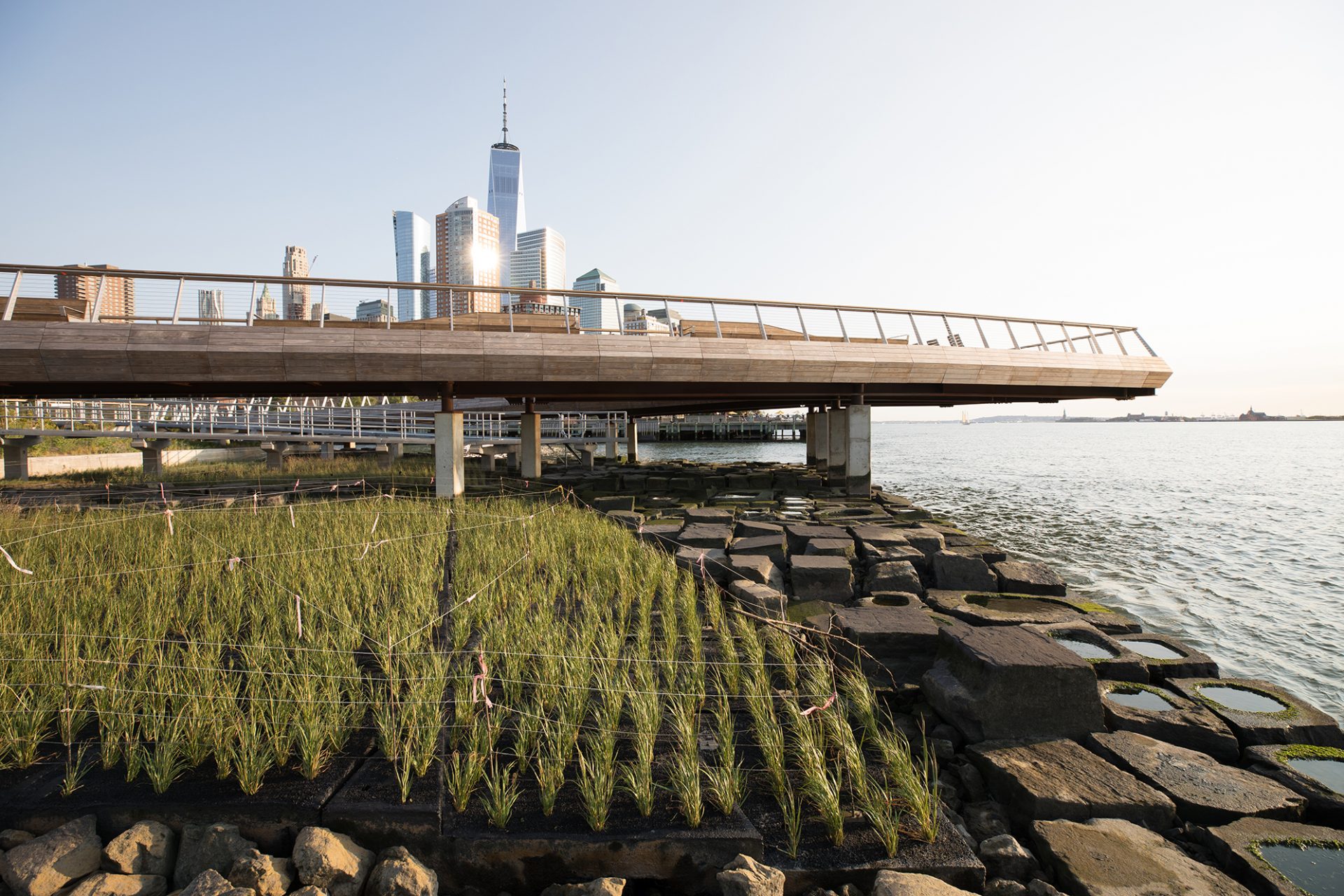 Within the zone initially identified for 9/11 recovery, the pier now will serve as an open space resource for New Yorkers as the city works to recover from the ongoing pandemic.

Located in Tribeca between Hubert and N Moore Streets, Pier 26’s most unique feature is a Tide Deck – an engineered representation of a rocky tidal marsh – for educational and ecological programming.

Along with indigenous plantings representing varied coastal communities, the Tide Deck is intended to heighten awareness of the wildlife and habitat found within the Park and the Estuarine Sanctuary included within its borders.

Other features on the new pier include a sunning lawn, a sports court for children’s play, and multiple lounge areas for enjoying river views.

The construction of the $37.7 million pier was funded by Citi, the Lower Manhattan Development Corporation (LMDC) and the City of New York. Design funds for the tide deck were provided by New York State’s Environmental Protection Fund.

“The incredible transformation of Pier 26 into a world-class ecological, educational, and recreational resource is a testament to the corporate, civic, and community leadership behind this project and an example of the powerful role public-private partnerships can play to help improve quality of life for communities,” said New York State Department of Environmental Conservation Commissioner and Hudson River Park Trust Chair Basil Seggos.

“The millions of visitors drawn to Hudson River Park each year will enjoy the pier’s state-of-the-art amenities for generations to come, and with improved access countless children now have the opportunity to learn unforgettable lessons about the Hudson River.”

“Seven years in the making, we are proud to open this entirely unique pier at a time when Hudson River Park has taken on new importance for so many in the face of the current health crisis — providing a much-needed oasis in a city with limited green space,” said Madelyn Wils, President and CEO of Hudson River Park Trust.

Pier 26 was designed by the landscape architecture firm OLIN. Its 15,000 s/f Tide Deck – the first of its kind in New York City – has been planted with native shrubs, trees and grasses intended to mimic the wetlands that once existed along the Hudson River shoreline and is part of a coastal area that regularly floods with the daily tidal cycle, giving plants and wildlife vital nourishment from the river.

An elevated cantilevered walkway above the Deck provides city and river views, while the Deck itself will be accessible for guided tours and educational experiences led by the Park’s staff.

The riverfront access point will help support the educational programming offered by the Trust’s environmental education and scientific programming arm, the River Project, for more than 30,000 kids and adults every year.

Pier 26’s upland is home to the City Vineyard restaurant and wine bar, and Downtown Boathouse, which has provided free kayaking for half a million people since its inception.

In the future, the upland area immediately east of Pier 26 will also include a specialized science-themed playground of more than 4,000 s/f, designed by OLIN and with play features by the Danish playground design firm Monstrum, which helped design Hudson River Park’s pipefish playground in Chelsea Waterside Park.

The play area will include larger-than-life play features in the forms of native and endangered Sturgeon species found in the Hudson River. The playground will join the Trust’s planned estuarium on the adjacent upland to complete the Tribeca section of Hudson River Park. The estuarium – a research and education center featuring live Hudson River fish to be run by the Trust’s River Project and focused on river ecology – is in its fundraising stage.

The opening of Pier 26 comes as the Trust spearheads approximately $1 billion in public/private partnerships in ongoing construction toward completion of the Park. Construction is nearing completion on Little Island, the planned public park pier and performance space once known as Pier55 and expected to open next summer. That project was made possible through funding from the Diller-Von Furstenberg Family Foundation, and represents the largest single donation to a park in the history of the State, along with the City of New York.

Work is also ongoing at Pier 57, a mixed-use development by RXR Realty/Youngwoo and anchored by Google, which will include more than three acres of public open space, including a rooftop park and perimeter esplanade – also expected to open next year.

At the same time, the Trust plans to break ground by next spring on three additional public park projects: Gansevoort Peninsula, which will provide direct waterfront access for the public with a resilient beachfront and with the largest single greenspace in Hudson River Park; Pier 97, which will include a lawn, playground, sunset plaza, and youth soccer fields, along with an esplanade connection to Riverside Park South; and a reconfiguration of Chelsea Waterside Park.

Finally, the Whitney Museum of American Art is building “Day’s End” by David Hammons on the southern edge of Gansevoort Peninsula in partnership with the Trust, which will be one of the country’s largest public art projects upon completion late this year.

The opening of Pier 26 marks an important post-9/11 rebuilding milestone for Lower Manhattan. In 2010, the Lower Manhattan Development Corporation funded construction of piers 25 and 26 as part of its ongoing rebuilding efforts in the neighborhood. The adjacent Pier 25 is the most heavily used pier in Hudson River Park.