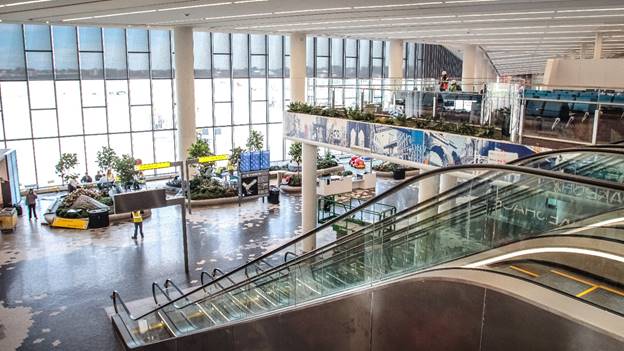 The first new gates built as part of the $8 billion LaGuardia Airport upgrade have been opened.

New York Governor Andrew Cuomo was joined by representatives of the Port Authority and LaGuardia Gateway Partners (LGP) – the private entity rebuilding Terminal B – for an official opening of the Terminal B Eastern Concourse last weekend.

The new, 250,000 s/f light-filled Eastern Concourse in Terminal B opened to the public on December 1, marking the largest milestone to date in the airport’s historic transformation. The concourse will house a total of 18 gates with modern customer amenities, state-of-the-art architecture and more spacious gate areas.

Skanska is the leading partner in the Skanska-Walsh Joint Venture responsible for the $4 billion design and construction of Terminal B.

“We take great pride in being a part of the development and construction of the new LaGuardia, which is as much about creating a world-class passenger experience as it is providing a model for responsible and sustainable infrastructure for years to come,” said Skanska USA President and CEO Richard Kennedy.

“The top-to-bottom rebuilding of one of the nation’s busiest airports, all while continuing to operate it around-the-clock, is one of most complex projects Skanska has ever led.”

The redevelopment, happening at one of the nation’s busiest airports, is the largest public-private-partnership in U.S. aviation history and one of the most complicated projects ever undertaken by Skanska.

Under the multi-phase construction plan, old facilities are demolished only as new facilities are completed to ensure the airport never loses capacity. It is designed to enable the 30-million passengers-a-year airport to remain fully operational while Terminals B & C are rebuilt.

As part of the construction, Skanska’s inclusion of minority- and women-owned (MWBE) businesses on the project represents the largest use of such firms to date on a single project in New York State history. Overall, the redevelopment of LaGuardia is anticipated to create a combined $10 billion in economic activity and $2.5 billion in wages over the life of the project.

“We are excited to have worked with our partners and so many subcontractors to make the opening of the eastern concourse of Terminal B a reality,” said Magnus Eriksson, Executive Vice President of Skanska and Chair of the Board of LaGuardia Gateway Partners.

“This collaborative effort, using innovative construction and design techniques is something that we are proud to bring to LaGuardia, and our project continues to have one of the largest Minority and Women Owned Business Enterprises (MWBE) participation goals in the New York State.”

Governor Cuomo first unveiled the vision for a redevelopment of LaGuardia Airport in 2015 and Skanska broke ground in 2016. When completed, the new 2.7 million square foot LaGuardia Airport will be the first new airport built in the U.S. in more than 25 years.

“The opening of the first new concourse and gates at Terminal B marks another significant milestone in the transformation of LaGuardia Airport into a modern, global gateway that is worthy of the State of New York … and now travelers from across the world will start to see and experience a whole new LaGuardia,” said Governor Cuomo.

The new $4 billion Terminal B is replacing the obsolete terminal that opened more than 50 years ago. The terminal will have a total of 35 gates, including the first 11 opening this weekend and seven more coming into service in early 2019.

Dual pedestrian bridges will rise over active plane taxi lanes, connecting the main departures and arrivals hall that will open in 2020 with the two island concourses, offering travelers views of the Manhattan skyline as they head to and from their gates.

This year has been critical for the project as progress has accelerated. In February, Skanska completed construction of the new, seven-story Terminal B parking garage, which features 3,100 parking spaces, including more than 2,400 for personal vehicles. A dedicated level for Uber, Lyft and other car services provides 50 clearly marked loading areas for passengers to meet their drivers inside, protected from the elements.

In July Skanska opened a new flyover roadway to LaGuardia Airport from the Grand Central Parkway’s Eastbound Exit 7, the primary roadway or overpass for vehicles accessing the airport. This flyover was the first and most important of 18 new bridges Skanska is constructing to improve traffic flow at the airport, with 15 existing old or obsolete bridges scheduled to be demolished by mid-2021.

The new Eastern Concourse is designed with  55-foot  ceilings and floor-to-ceiling windows, an indoor park with benches, landscaping and real trees. Charging stations are placed throughout the gate seating areas, with free, fast and unlimited high-speed Wi-Fi enabling travelers to surf, search and stream while they wait.

More than a dozen concessions in the new concourse include New York-inspired food, beverage and retail options with the ability for passengers to have food delivered directly to their gate. Restaurants include popular New York establishments such as Shake Shack, La Chula, Osteria Fusco, Kingside and Irving Farm Coffee. Retail venues include an FAO Schwarz toy store, McNally Jackson independent bookseller and District Market.

“The opening of the new eastern concourse at Terminal B is just the first step in creating an elite-level experience for LaGuardia’s passengers and realizing Governor Cuomo’s vision of a unified 21st century airport,” said Stewart Steeves, Chief Executive Officer of LaGuardia Gateway Partners. “From best-in-class retail and food options, to innovative design, family-friendly spaces, and modern amenities, we’re honored to work with both the Governor and the Port Authority to reimagine LaGuardia, transforming Terminal B into a gateway New Yorkers can be proud of.”

Skanska and LaGuardia Gateway Partners are pursuing LEED v4 certification for the redevelopment project, as well as the most holistic Envision rating system. This makes the project one of the first of its kind to pursue both designations and represents a commitment to sustainability in design, construction, sourcing, and community involvement in Terminal B.

As part of the project’s focus on staying green, the team was able to recycle 21,604 tons of concrete from the demolition of the original parking structure. Of this recycled concrete, 2,475 tons – roughly 5 million pounds – were reused on the adjacent job site. Overall, 99.92 percent of debris removed from the old parking garage was recycled.

LaGuardia Gateway Partners is composed of Vantage Airport Group, Skanska and Meridiam for development and equity investment; SkanskaWalsh as the design build joint venture; HOK and WSP | Parsons Brinckerhoff for design; and Vantage Airport Group for management of the terminal operations.