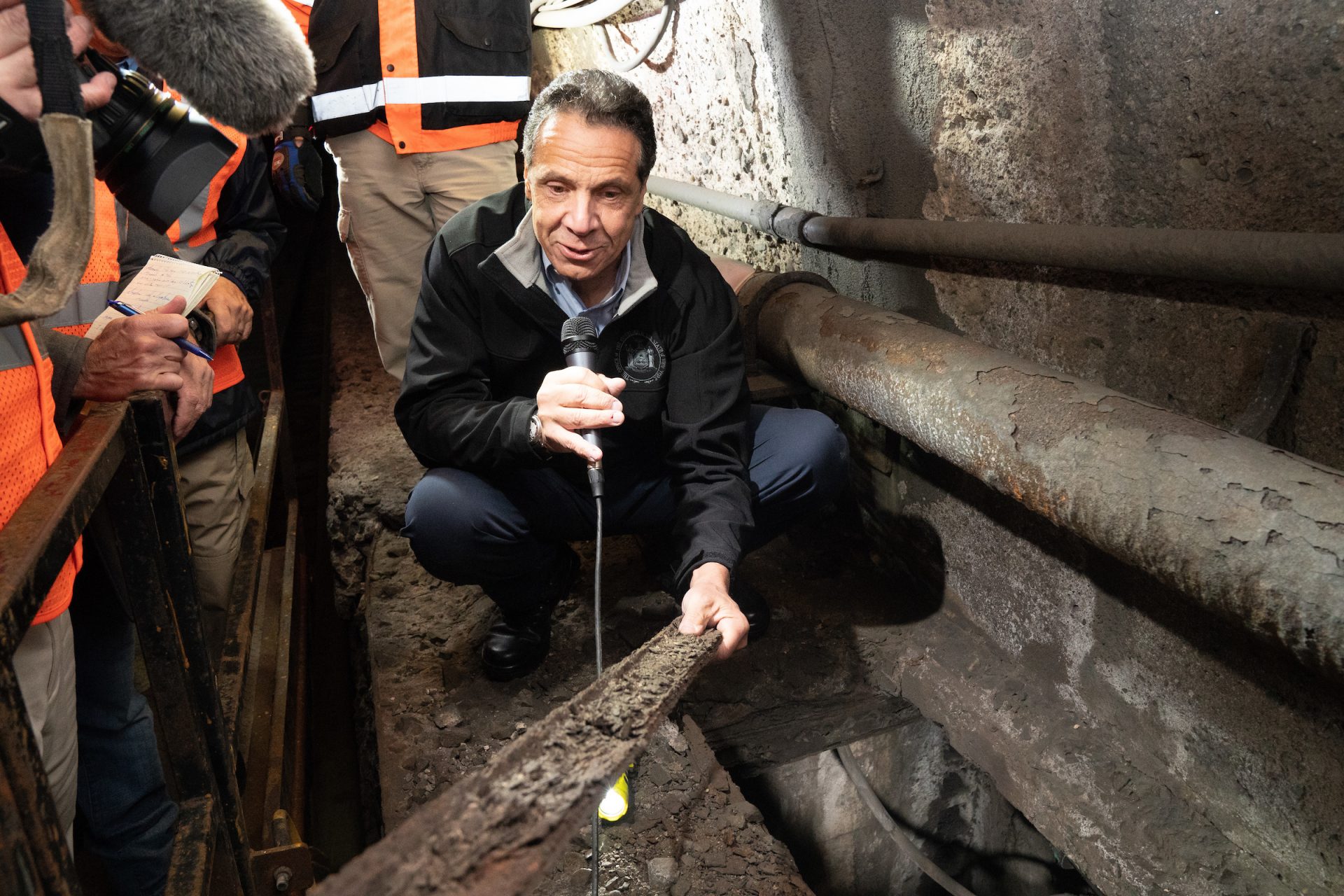 It began with a YouTube video, a five minute compilation of crumbling cement and pooling saltwater in the Amtrak train tunnels beneath the Hudson River.

After sending that video, which details the dire state of the century-old tubes, to President Donald Trump, Governor Andrew Cuomo was able to secure a face-to-face meeting with at the White House last week.

“The president has a background in construction and has a knowledge of construction and these pictures, for anyone who’s familiar with construction at all, are frightening,” Cuomo said during a press conference after his powwow with the POTUS. “You have slabs of the ceiling that are falling onto the track.”

New York’s top executive sat down with the commander in chief, Transportation Secretary Elaine Chao and Chief of Staff John Kelly to discuss several other current and pending infrastructure projects.

Cuomo’s main prerogative in reaching out to the president—whose policies and governing style he has questioned publicly—was to shore up federal funding for the Gateway Project, a $30 billion endeavor that would create two new tunnels beneath the Hudson River, repair the existing tracks, construct new bridges and upgrade New York Penn Station.

Although Cuomo and his envoy, which included his secretary Melissa DeRosa and Port Authority chief Rick Cotton, were not able to secure any guarantees from the president, he left the Oval Office feeling confident that he has a willing partner in Trump.

“It was all good. The president got it,” Cuomo said. “He had a surprising amount of knowledge about the infrastructure projects that we’re doing in New York. Again, he has a development, construction background, so he knows these issues and he knows the questions of process and bidding and making sure the exposure is what everybody expects. “So it was a very productive conversation and we’ll be following up for next steps.”

The two Queens-born politicians reportedly saw eye-to-eye on how such a project would be executed: by private contractors selected through an international bidding process. Cuomo held up his recently-completed Tappan Zee Bridge replacement as a model for the project and Trump, for his part, has pushed for greater private sector involvement in infrastructure projects.

Although the current tunnels, which were badly damaged by Hurricane Sandy in 2012, are owned by Amtrak, Cuomo has proposed splitting the cost of new tunnels between New York and New Jersey (25 percent each) and the feds (which would take the remaining 50 percent).

Trump did not release an official statement about the meeting or address it through his often-used Twitter account. He told the New York Post his administration would explore the issue even though it’s “probably the world’s most expensive project.”

“We’re looking at it now,” Trump told the tabloid. “The tunnel is very old and what [Cuomo] did was he sent me a video talking about the existing tunnel—and it is a very old tunnel.”

With some 450 Amtrak and NJ Transit trains passing daily though Penn Station, which serves as a hub not only for Metro New York but also the greater Northeast Corridor, the train tunnels are crucial to the U.S. economy. A loss of even one tube due to electrical malfunction—an increasingly likely scenario—could be crippling to GDP, experts maintain.

Building the new tunnels alone is expected to cost more than $11 billion and take at least seven years.
Trump has been no friend of New York since changing his full-time residence from 725 Fifth Avenue to 1600 Pennsylvania Avenue, enacting a new tax code that prevents homeowners from deducting state and local taxes from annual income tax filings.

The Empire State has been no kinder to its presidential son, as Cuomo has criticized Trump’s “hate-filled agenda” and accused him of “ripping babies from their mothers arms” while the state’s attorneys general have probed Trump, his company and his charitable organization.

Yet, when it comes to infrastructure, one of Trump’s campaign staples and perhaps the only policy item that appeals to both sides of the aisle, it appears he’s willing to let bygones be bygones and again buddy up with Cuomo, to whom he has given $64,000 in political contributions.

“I have a good relationship with him,” Trump told the Post. “I like him. He likes me.”

The meeting drew praise from the New York Building Congress, which has long trumpeted the importance of the Gateway Program.

“The New York Building Congress applauds Governor Cuomo and President Trump for cutting through partisan politics to discuss the Gateway Program – the most important infrastructure project in the country,” the organization’s president, Carlo Scissura, said in a statement.

“As we’ve said before, failure of the existing tunnels would be catastrophic for the entire region,” he added. “We need immediate investment in Gateway and the Building Congress and its members are ready to roll up our sleeves and put shovels in the ground. New York’s building industry stands at the ready. It is critical for us to put politics aside and get the Gateway Program underway now.”