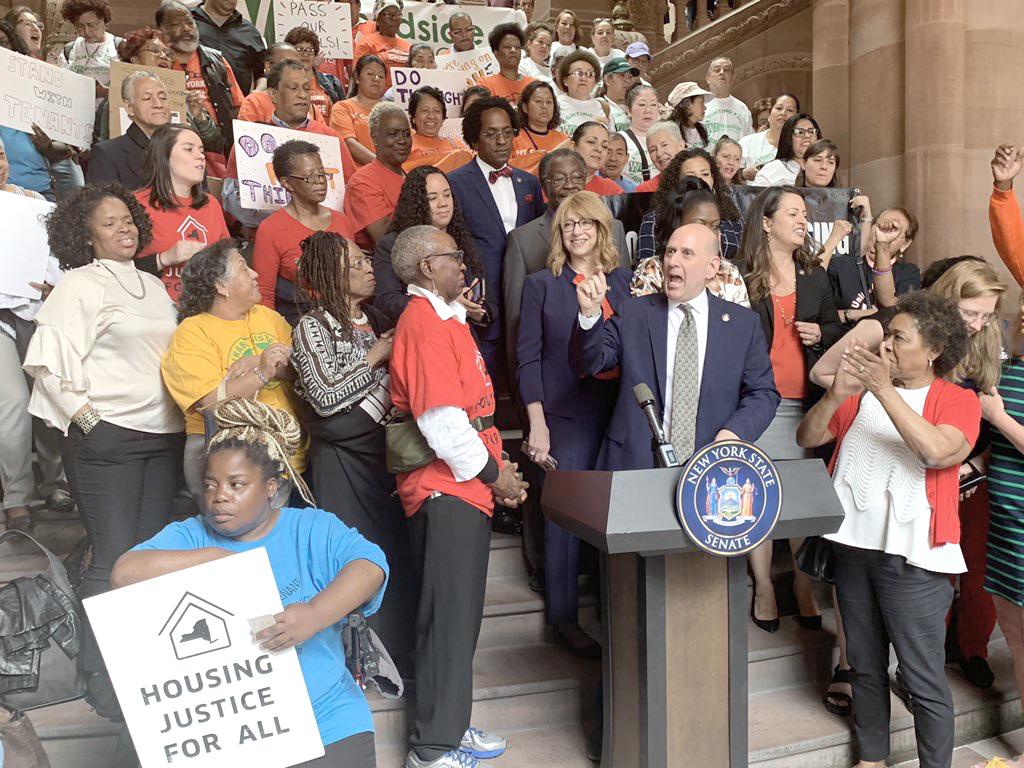 The most sweeping changes ever made to New York City’s rent regulations have been roundly criticized by a real estate industry that is warning of crumbling housing stock and a worsening affordability crisis.

“The harmful impact of this legislation will be profound for New York City’s economic future,” warned John Banks, president of the Real Estate Board of New York after Governor Andrew Cuomo signed a package of tenant-friendly laws that cut rents and stifle renovation options.

“There are many losers including small property owners, contractors as well as tenants,” added Banks.

“This legislation will keep rent lower for some, but also significantly diminish housing quality and lead to less tax revenue to pay for vital government services.

“It will worsen the city’s housing crisis. The construction of future affordable units will slow, if not end altogether, the housing vacancy rate will worsen and nothing will have been done to make it easier for those who struggle to pay their rent. “There was a path to responsible reform that could have protected tenants as well as owners, jobs and revenue, but Albany chose not to take it.”

The Rent Stabilization Association, which represents around 25,000 landlords of regulated properties, said the new rules will hurt tenants and landlords.

“The same irrational Albany lawmakers who ran Amazon out of town have lit the fuse that will run the city’s housing stock into the ground and bring back the bad old days of the 1970s when prohibitive laws in tandem with high property taxes forced landlords to abandon their properties and New York became the poster child of urban blight.”

The new regulations include the repeal of vacancy and high-income deregulation, an end to vacancy bonuses and stricter limitations on major capital improvement (MCI) and individual apartment improvement (IAI) rent increases.

Stabilized tenants will see their rents lower as MCI charges which were previously held at no higher than six percent of a tenant’s rent, will now be no higher than two percent.

The charges will also be eliminated after 30 years instead of being paid in perpetuity. If tenants have signed a lease with a preferential rent, that amount, when the lease is renewed, will now only be allowed to climb as high as the rent increase voted on by the Rent Guidelines Board. Previously it could have gone as high as the maximum legal rent.

Individual Apartment Increases will now be limited to $15,000 each, and only three units will be eligible over a 15-year period. The increase would also last 30 years instead of remaining permanent. Tenant blacklists are to be scrapped and there will be more protections for tenants fighting eviction. Additionally, any conversions to co-ops or condos must be non-eviction plans. Tenants who want to file overcharge complaints will now have six instead of four years to do so.

Michael McKee, spokesperson for TenantsPAC said the 74-page-long piece of legislation, which went into effect as soon as Governor Cuomo signed it, is most significant because it takes the speculation out of real estate investing.

“These last 25 years, with the weakening of the rent laws, it allows speculative landlords to move in,” said McKee. “That’s over now. There’s no vacancy decontrol. No longevity bonus. MCIs will be based on need, not speculation, not a business model that relies on displacing people. They don’t have the mechanisms.”

He said owners will still see profits on MCIs. “Under the old MCI law, they saw returns of 20 percent. With the new law, they’ll still see a return, but it will be six percent. So they’ll just have to live with it.”

McKee said powerful tenant activists, including those living in Blackstone-owned Stuyvesant Town-Peter Cooper Village Tenants Association, should be given credit for voting the Senate into Democratic hands and getting the new regulations into law. “Without that, it wouldn’t have been possible,” said McKee, adding that the new laws would prevent Blackstone deregulating any of the 11,000 apartments at the East Side complex.

“They were going to turn 7,000[(units market rate after the affordability deal with the city expires] and preserve 5,000,” he said. “I don’t see how they’re going to deregulate any of them.”

State Senator Brad Hoylman said that while tenants didn’t get everything that was asked for (such as the total elimination of IAIs and MCIs and universal rent control), the new laws laid the groundwork for more tenant protections statewide. “We have broken the stranglehold of the landlord lobby,” Hoylman said.

The New York State Association of Realtors expressed mixed sentiments, saying it had concerns about the “geographic expansion” of regulations, arguing there is no housing crisis outside the city. This was in reference to change in the law that would allow upstate municipalities to establish rent regulation.

“We believe these new rent regulations will stifle real estate investment and slow the development of further affordable housing across New York State,” the group said.

However, the association added it was pleased the law doesn’t include a “good cause eviction” clause as had been initially proposed.

Prior to the legislation’s signing, lawmakers gave testimony throughout the day on Friday about the hardships of tenants in their districts. Some upstate legislators expressed disappointment the package of bills didn’t do more for tenants in rural areas, including mobile home residents who own their homes but are nonetheless vulnerable to evictions when large, out-of-state companies buy the land where their homes are located.

However, lawmakers representing the city spoke overwhelmingly about constituents who’ve faced unfair evictions, steep rent increases that ultimately resulted in evictions, and harassment that makes tenants feel they must move, coupled with an inability to move due to the high costs.

On the new legislation, called the Housing Stability and Tenant Protection Act, Assembly Member Linda Rosenthal said, “This year we are saying to the landlords, your money doesn’t count. You have no friends here. We’re making sure that going forward [tenant] don’t have to live under threat of harassment.”

Assembly Housing Committee Chair Steven Cymbrowitz concluded the testimony in his chamber when he said, “We were hearing from tenants, people who were really hurting, asking us, begging us to help them and I think we did that. We met with everyone. Every single stakeholder who wanted us to meet, we met.”