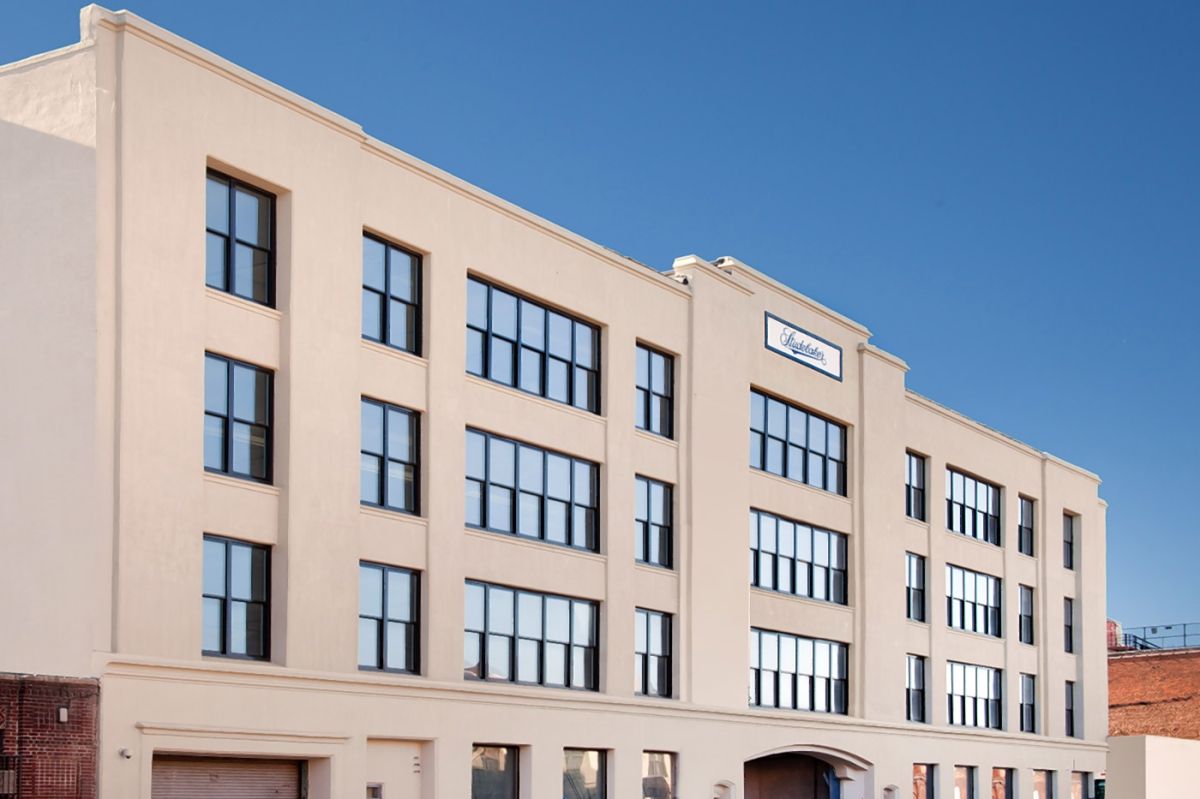 Ofer Cohen, Dan Marks and Daniel Lebor of TerraCRG were the brokers. Asher Abehsera of LIVWRK is the buyer.

1000 Dean Street was built in 1920 as a service station for Dodge and Plymouth cars and trucks and became a Studebaker Service Station in the 1940’s.

In 2012, the building was purchased as a joint venture between Jonathan Butler (the founder of Brownstoner, Brooklyn Flea and Smorgasborg), BFC Partners and the Goldman Sachs Urban Investment Group, and was renovated into a creative office building.

“The sale is a not only a testament to the strength of the creative office market in Brooklyn but also the robustness of the entrepreneurial class in Brownstone Brooklyn,” said Cohen, Founder and CEO of TerraCRG.

“We are glad the building is in the very capable hands of Asher and his partners. Asher is a true pioneer in the renaissance of the creative/tech office market and has the intuition to continue to nurture the asset.”

On the ground floor, the building is anchored by Berg’n, a Brooklyn beer hall and event space.

Russo Development and Forsgate Industrial Partners have completed the $42.5 million purchase of the 718-acre Kingsland Tract, a former landfill spanning the municipalities of Lyndhurst, Rutherford, and North Arlington.

To close the transaction, which Russo and Forsgate won in a competitive bidding process in June 2015, the partners engaged in an entitlement and engineering design process that resulted in a master plan that will transform the blighted property into a modern industrial complex.

The Partners expect to deliver the first building to the market in late 2021.

“The Meadowlands submarket is one of the strongest industrial/warehouse markets in the United States, and the opportunity to build this project in such an outstanding location is a great accomplishment for not only our companies, but for the region that we have helped develop over the course of more than 100 years of combined history,” said Edward Russo, CEO of Russo Development.

There have been multiple failed attempts over the years to redevelop the tract. In the 1990s, plans included golf courses and a luxury resort, but during the financial crisis the project reverted to the NJSEA’s predecessor, the New Jersey Meadowlands Commission, which completed a portion of an environmental clean-up program and offered the site for sale.

Tom Sullivan of CBRE, Inc., represented the NJSEA in the marketing and sale of the property.

CBRE announced the sale of One Tower Center in East Brunswick, New Jersey for $38,000,000.

Highly visible at 23 stories and l situated at the crossroads of Routes 1 and 18 and Exit 9 of the New Jersey Turnpike, One Tower is a Class A “value-add” opportunity given its current occupancy at 39 percent.

Part of the three-building Tower Center complex that includes The East Brunswick Hilton, the 415,743 s/f 23-story building, along with Two Tower, is the tallest office complex in Central New Jersey.

American Equity Partners plans to improve and reposition One Tower. It offers one of the few blocks in excess of 100,000 s/f in the market and the planned improvements are aimed at capturing a large user who will benefit from a modern work environment.

Ariel Property Advisors has been retained to sell 710 3rd Avenue, a development site in Midtown East.

The asking price for the flexibly zoned and centrally located asset is $17.9 million.

Located on the west side of 3rd Avenue between 44th Street and 45th Street, the 25 by 95 ft. vacant lot offers C5-3 zoning with a 15.0 commercial FAR and a 10.0 residential FAR, allowing for 35,625 buildable square feet, as-of-right, for a mixed-use commercial, residential or hotel project.

Creative uses may also include live-work environments, as well as shared space directed at residential or professional users.

“This property represents a tremendous Midtown East development opportunity due to its central location and flexible zoning that allows developers to be creative in an area that is attractive to both residential and professional tenants, as well as tourists,” said Raber.

“It offers an outstanding location for commuters – just minutes from mass transit and major highways including Route 46, Route 20/21, I-80 and the Garden State Parkway via Exit 157.”

Markel, one of the largest excess and surplus lines insurers in the United States, has leased the South Building as one of its headquarters since 2002 and will continue to lease the building on a long-term basis.

Said Schultz, “This property is located off of Route 35 and supported by a variety of additional transportation networks. The buildings, midway between New York City and Philadelphia, are both the perfect location for Markel to continue doing business and a compelling investment opportunity for Denholtz.”