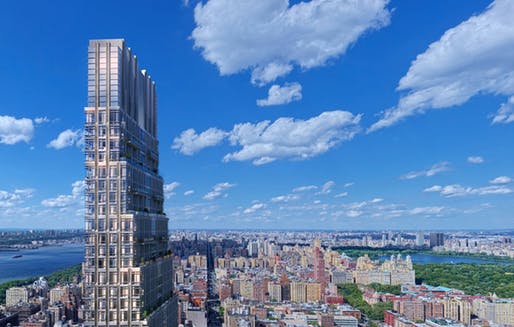 Manhattanites are rallying to chop the tops off so-called supertall skyscrapers.

Now, activists are looking to apply the same rules to a second supertall at 430 East 58th Street.

“This groundbreaking decision averts a dangerous precedent that would have ultimately affected every corner of the city,” said Elizabeth Goldstein, president of the Municipal Art Society of New York (MAS) which led the case against the 200 Amsterdam developers.

“The directive to partially demolish the building is appropriate given the willingness of the developer to ignore every sign that their project was inappropriately scaled for the neighborhood and based on a radical and wildly inaccurate interpretation of the Zoning Resolution.”

According to the MAS, SJP chose to build the 668 ft. skyscaper at 200 Amsterdam even as locals and preservationists waged a court battle to stop them. The developers had won earlier rounds in the war, but were told they were building more floors at their own risk while challenges proceeded.

The firm began marketing the 112 apartments after topping out last September with prices ranging from $2.6 million up to $40 million.

In a joint statement, SJP and Mitsui Fudosan said they planned to appeal Judge Perryʼs  decision, calling it “a shocking loss for New York City and its residents.

“It defies more than 40 years of precedent in the city’s zoning laws. It also ignores the thoughtful decision of the DOB (Department of Buildings) to grant the permit which was upheld by the BSA (Board of Standards and Appeals) following exhaustive document review and testimony over a two-year period,” said the statement.

“Both of those decisions recognized that retroactively applying new interpretations of the city’s zoning to previously approved projects undermines the stability of the regulatory environment needed to support the investment that is critical to New York City’s economy, tax base, housing stock and services.”

“We will appeal this decision vigorously in court and are confident that we, and the city, will prevail on the merits.”

Meanwhile, city council member Ben Kallos said he would like to see the same legal argument apply to the tower at 430 East 58th Street in his district.

The East River 50s Alliance (or ERFA) — of which Kallos is a member — has been fighting that development since 2015.

A court previously upheld a determination made by the Board of Standards and Appeals that the tower should be allowed to rise to its full 800 ft. because its foundations had been laid before regulations changed.

But Kallos said the community is considering whether to re-argue the case given the latest court ruling, citing concerns not just about its height, but its contribution to displacement in the Sutton Place neighborhood.

“They don’t want to see seniors being forced out of brownstones to make room for buildings for billionaires who aren’t even going to be there,” said Kallos. “It’s not even a pied-a-terre. It’s just investors buying helicopter views.”

He said stopping the tower at 400 ft. “will still block views and light, but it will be in context with the neighborhood.”

The DOB referred questions to the city’s Law Department where a spokesperson would only say, “The city is reviewing its legal options.”

While deconstruction of a tower in Manhattan is rare, it is not unprecedented.

In 1991, developer Laurence Ginsburg was ordered to shave 20 stories off 108 East 96th Street after a court ruled heʼd ignored zoning restrictions by building it to 31 stories.