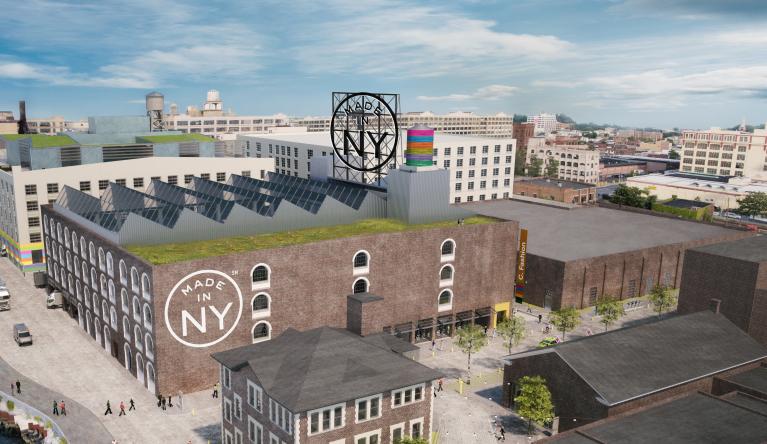 New York City Economic Development Corporation (NYCEDC) and the Mayor’s Office of Media and Entertainment (MOME) released a Request for Proposals (“RFP”) for an opportunity to develop nearly 200,000 s/f of waterfront real estate at the Made in New York (MiNY) Campus at Bush Terminal in Sunset Park into a campus dedicated to film/television production, sound-recording, media production, and related services and industries.

“The Made in New York Campus will open a new chapter in this success story, by providing a state-of-the-art home base for 1,500 professionals. And we’re making sure that this campus will provide opportunities for everyone by requiring that proposals focus on local hiring, gender equity, and promoting diversity and inclusion.”

Announced in Mayor de Blasio’s 2017 State of the City address, the MiNY Campus is a $136 million City investment to transform Bush Terminal into a hub for garment manufacturing, media production, and supporting industries.

Film, TV, sound-recording and other media production are, in addition to garment manufacturing, the core components of the MiNY Campus strategy.

The RFP for film, media, and production is in addition to the City’s investments, which will result in major renovations to several existing buildings to create nearly 200,000 s/f of garment manufacturing space and additional space suitable for flexible, modern light industrial uses, streetscape improvements, and significant utility upgrades.

The 36-acre Bush Terminal Campus is currently home to 500 workers and is expected to add approximately 1,500 new workers starting in 2020.

The MiNY Campus will be located next to Bush Terminal Piers Park, which opened in 2014 and now includes a new southern entrance to the park.

A spokesman for the EDC said,“ We’re in early phases of design of the garment hub and public realm.

“NYCEDC needed to fully vacate two partially vacant Bush Terminal Buildings. Nearly half of the businesses and the jobs were relocated to other spaces in NYCEDC’s Sunset Park Campus (Brooklyn Army Terminal, Bush or Brooklyn Wholesale Meat Market). The rest of the campus remains home to garment and other light manufacturing businesses, who continue to work on site.

“We are currently in negotiation with the first new tenants for the garment hub, which we’re excited to share will be announced later this year.”

The garment hub is located in Unit A at 1 43rd Street. The propsed movie studio will be at Unit G.

The film and television production sector is one of the fastest growing, high-wage industries in the city, but a shortage of stable, affordable, high-quality facilities leaves many firms struggling to find space for production.

The MiNY Campus presents an opportunity to build new, high-celling sound stages and support space for film and television production, video and photo shoots, sound-recording, and emerging media sectors such as AR/VR.
Proposals for the MiNY Campus are due November 2, 2018.