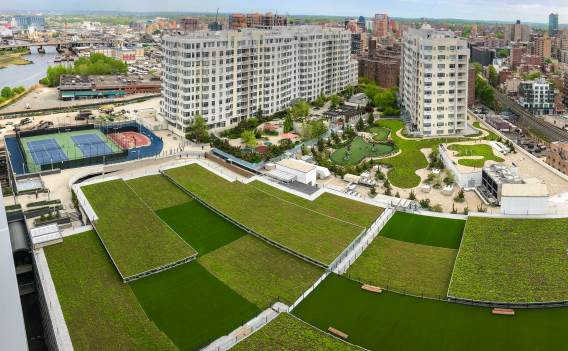 Queens is getting greener with a new 55,000 s/f green roof atop a Flushing luxury condo.

Onex Real Estate Partners  teamed up with Blondie’s Treehouse to create one of Queens’ largest green roofs at the 448-unit  Grand at SkyView Parc at 40-28 College Point Boulevard . The roof, made of sedum plants, was installed in phases between February and March.

According to Blondie’s, the green roof will provide the community with several benefits, including lower temperatures, reduced storm water runoff and increased property values.

Blondie’s CEO Howard K. Freilech said their new multi-level green roof, combined with the ground level park and other green amenities creates a “cascading waterfall of vibrant green.”He added, “The green roof, perhaps the most visible exterior feature of this gleaming new luxury development, is symbolic of the improvements to the neighborhood.

“The success of this project has already led to further investment in the surrounding area and infrastructure plans pointing toward a bright new future for Flushing.”

Blondie’s said they could not disclose the pricing for the Skyview Parc green roof, but pointed out that it had an impact on sales in the building.

“The relationship between the glitzy, upscale amenities like the green roof and the records in sales is impossible to miss,” Freilech said. “The green roof is a benefit not only to the residents and the environment at large, but as an effective sales tool for developers and marketers as well.