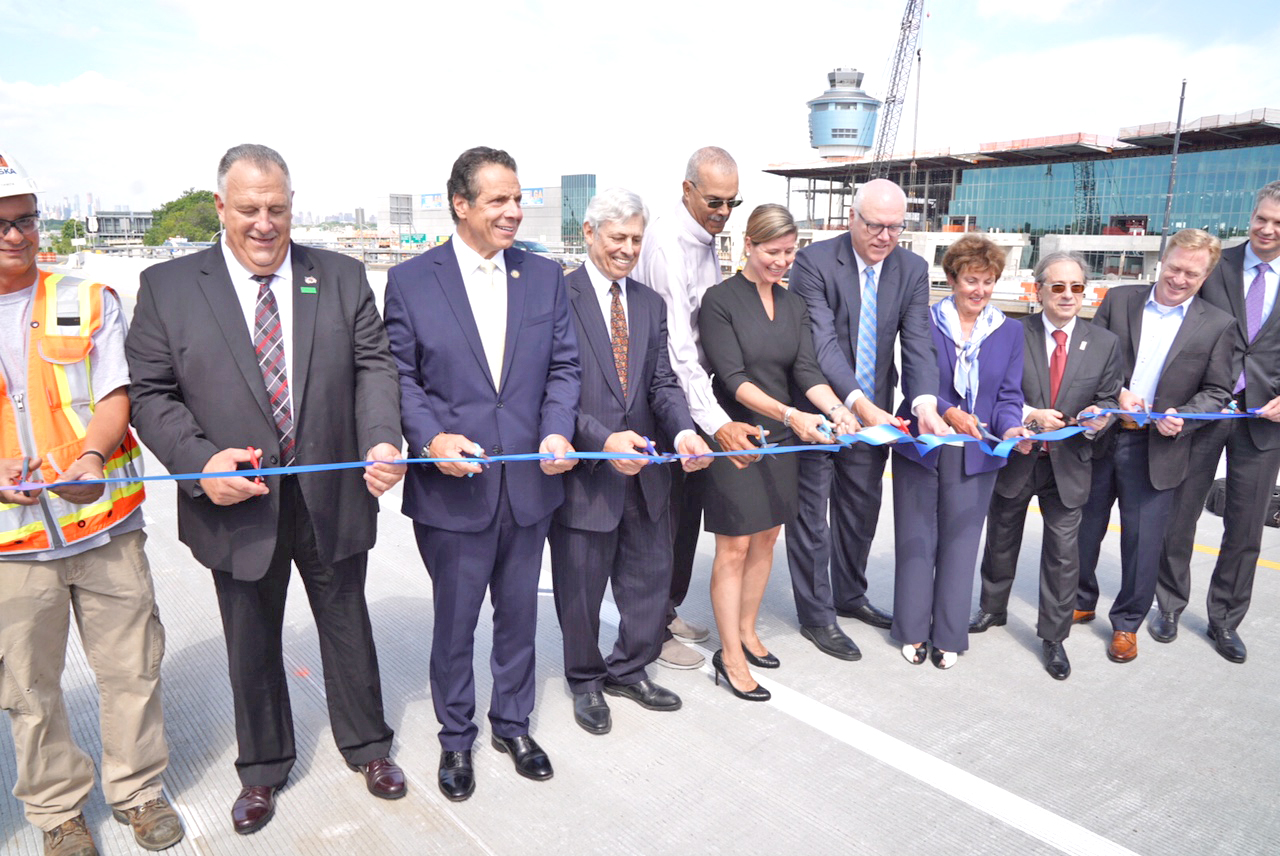 Skanska executives and employees working on the transformation of LaGuardia Airport’s Terminal B celebrated the opening of a new flyover ramp at a press conference with Governor Andrew Cuomo and Port Authority of New York and New Jersey Executive Director Rick Cotton, along with other elected officials.

The new flyover ramp, located at the Grand Central Parkway’s eastbound Exit 7, will be the primary access point for vehicles traveling to the eastern side of LaGuardia Airport where Delta’s gates are located.

Construction of the flyover was completed in less than two years and marks a significant step in the ongoing LaGuardia Airport modernization project that Governor Cuomo announced in 2015.

The flyover is anticipated to carry 20 percent of the nearly 18,000 daily vehicles traveling to LaGuardia, and will provide travelers with a new, direct connection to the arrivals level.

“A critical part of this complex effort is ensuring improved airport access and traffic flow through a completely rebuilt roadway network, and this flyover opening is a major step toward that goal,” said Port Authority of New York and New Jersey Executive Director Rick Cotton.

The Skanska Walsh Joint Venture is leading construction of the new roadway and bridge system as part of the broader, $4 billion redevelopment of LaGuardia’s Terminal B.

In addition to the new, state-of-the-art, 1.3-million square foot Terminal B, Skanska is adding more than 8 miles of roadways – including 20 new bridges – as well as a brand new, 3,100-space Parking Garage that opened to the public in February.

Skanska USA Civil has its national headquarters of more than 7,000 white- and blue-collar workers based in nearby East Elmhurst, Queens, where the company is also making other investments in the local community.

“Travelers will benefit from a direct route to Terminals C and D, and the surrounding community will also see benefits like Skanska Walsh’s upcoming investment of nearly $2 million in facilities for the Elmjack Little League who serve the neighborhoods of Astoria, Elmhurst and Jackson Heights.”