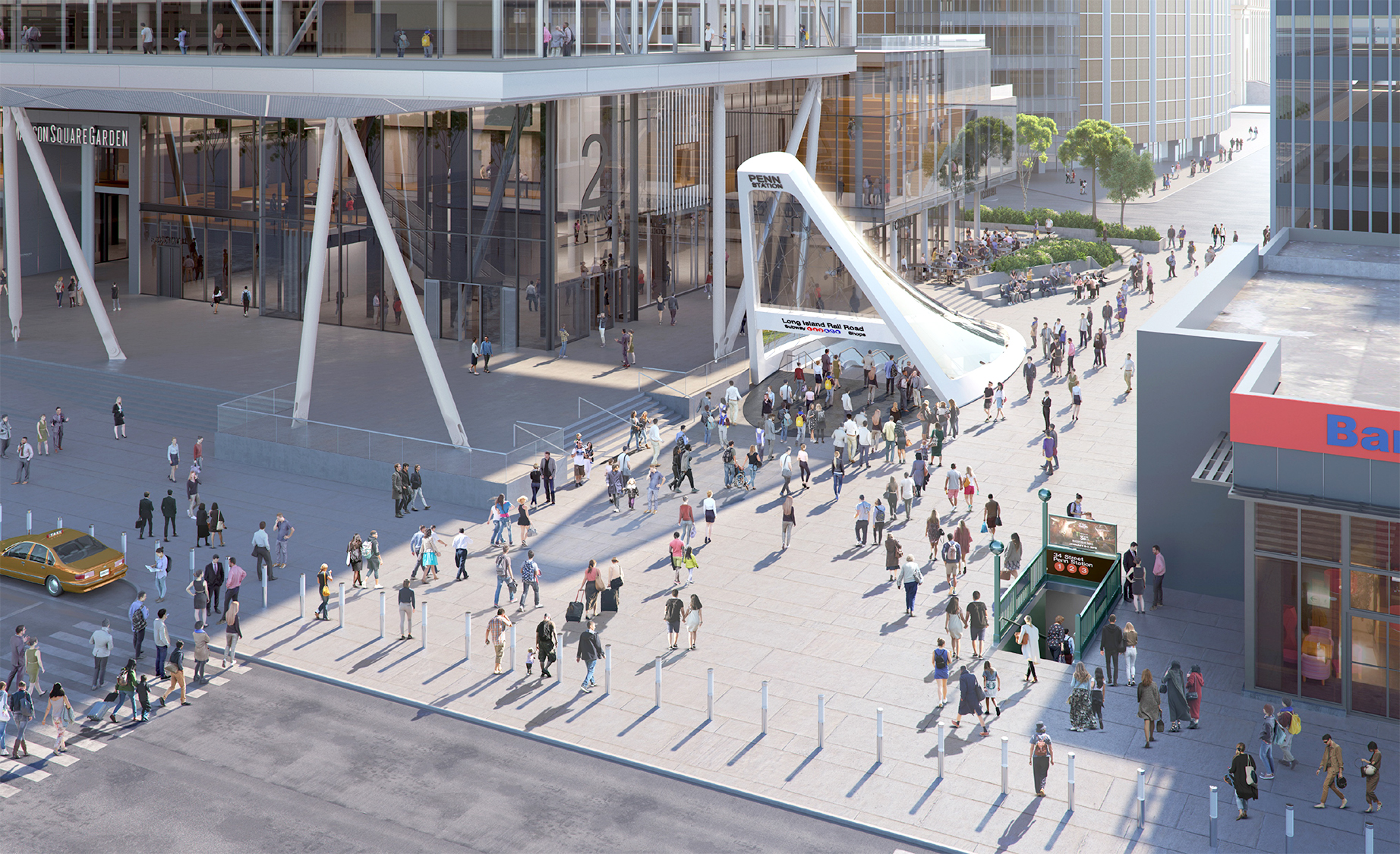 The new entrance will be located at 33rd Street and 7th Avenue, providing direct access to the Long Island Rail Road Main Concourse and the New York City Subway.

The project, which will begin construction in June, will eliminate congestion by doubling customer access and egressing capacity to the LIRR level when it is completed in 2020.

The Governor also announced that the overall Penn Station redevelopment master plan — which includes the creation of the Moynihan Train Hall — continues to move forward.

“Penn Station was one of the great railroad stations of the world, but now it’s not fit for the greatest city in the nation,” Governor Cuomo said.

“That’s why we are creating a world class train hall at Moynihan and today we are announcing a new East End Gateway to bring more access, safety and light. Passengers will be able to come in that entrance and avoid the front of Penn Station, there will be less traffic and you’ll have access to the subway and the LIRR. It will be a gateway to a world class facility. This is not a proposal – we are getting to work now.”

The entrance will be the main entry point for passengers and is scheduled to open in December 2020.

Passenger traffic has more than tripled since the current Penn Station was built, increasing from 200,000 to 650,000 passengers daily. Currently 250,000 people take the LIRR every day, along with 235,000 daily customers who use New Jersey Transit.

In addition, 115,000 people use the station each day solely to enter or leave the A/C/E and 1/2/3 subways or to patronize the on-site retail.

Presently, the Penn Station entrance on 34th Street is the only direct way to enter the LIRR level, and the concourse and its existing egress facilities are highly congested, with congestion certain to increase in the future.

By creating the new entrance at 33rd Street and 7th Avenue, the project will relieve this potential congestion and the serious safety concerns it creates.

In doing so, the new entrance helps prepare the transit system for the implementation of Central Business District tolling, which will increase ridership as it reduces congestion in Manhattan and provides critical funding for further improvements.

The new entrance will connect passengers directly to the LIRR Main Concourse from 33rd Street and 7th Avenue, and will include three escalators, a stairway and an elevator. The project will widen the LIRR 33rd Street Concourse from its current 30 feet to 57 feet to allow easier access to trains and reduce potentially dangerous crowding. The design will also increase the ceiling height to 18 feet across the entire concourse, eliminating the 7 and 8-foot high areas that have, for decades, made the station experience feel cramped and less spacious.

Lighting will be improved and more intuitive wayfinding will be provided to passengers. LIRR customers will also have new direct sight lines to track level and there will be additional retail and dining options in the concourse as well.

The project is estimated to cost approximately $600 million, with $170 million of the total being allocated from the current 2015-19 MTA capital program. The remaining funds are being allocated by the State of New York.

As part of the master plan and in collaboration with the MTA, beginning this summer, a functional and operational assessment will take place to develop additional plans to reconfigure the station.

This assessment will then be complemented with “extensive community engagement” to refine the plans.

Five decades after the loss of the original Pennsylvania Station, the Moynihan Train Hall will once again provide New Yorkers a grand entrance in a McKim, Mead and White architectural marvel.

The train hall is also set to open in December of 2020 and will bear the name of one of its great champions — the late Senator Daniel Patrick Moynihan.

Passengers will be able to come in that entrance and avoid the front of Penn Station, there will be less traffic and you’ll have access to the subway and the LIRR.

“Building a new Penn Station entrance is a huge step toward giving our millions of customers the transit hub they deserve, and making the everyday experience of using the LIRR and Subways safer and easier,” said MTA Chairman and CEO Patrick J. Foye.

“Thanks to the commitment of Governor Cuomo, this is just one component of the work we’re doing to modernize the LIRR and Subway system, with hundreds of transformative projects systemwide, including upgrading signals, expanding ADA accessibility, and expanding the LIRR with a Main Line third track.

“My daily commute takes me through Penn Station as I switch from the LIRR to the Subway, and I personally look forward to the benefits this new entrance will provide.”

MTA Chief Development Officer Janno Lieber, said, “We are excited to deliver this transformative project within budget and on an aggressive schedule and – like all the MTA’s major projects – faster, smarter, and cheaper than in days past.”

LIRR and Amtrak trains will be served by the nine platforms and 17 tracks that will be accessible from the Moynihan Train Hall, reached by eleven new platform escalators and seven elevators.

The Train Hall will create direct access to the train station from 9th Avenue for the first time, bringing unparalleled regional transportation options within convenient reach of the booming Hudson Yards and Far West Side areas.