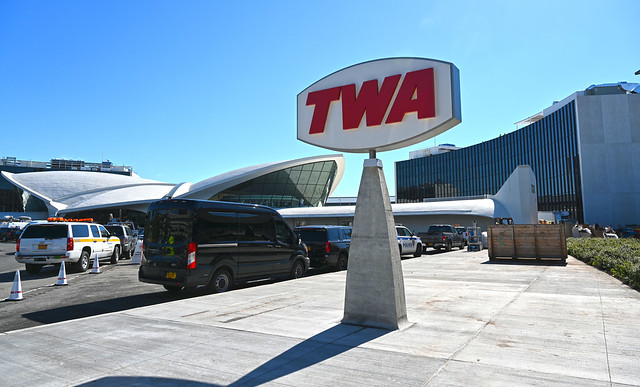 The project transforms the former Trans World Airlines terminal, which was designed by world-renowned architect Eero Saarinen in 1962 and closed to the public in 2001, into the centerpiece of a modern 512-room hotel that will preserve its mid-century design and offer lodging and best-in-class services to millions of travelers each year.

The new hotel, which was announced by Governor Cuomo in 2016, builds on the historic $13 billion vision plan to transform JFK airport into a 21st century facility that will continue to serve as the nation’s premier international gateway.

“The TWA building was ahead of its time, and it represented New York’s vision and creativity and boldness and outside-the-box thinking. New York has always been the state that led the nation in firsts, in reforms, in turnarounds and in troubled times. When the nation needed to find a direction forward, you could always look at New York and New York pointed the way forward,” Governor Cuomo said.

“This rebirth of the TWA Hotel says we haven’t lost our imagination, our boldness, our creativity, our daring – and we are still one step ahead of everyone else. If you want to know where the future’s going to lead, look to the State of New York. The best is yet to be, and the TWA Hotel is a beautiful example.”

The TWA Hotel project was achieved through a public-private partnership on a six-acre site in the center of JFK Airport, which serves approximately 63 million passengers a year and 1,300 flights daily.

The hotel will include 512 guestrooms with views of airport runways and the historic TWA terminal, 50,000 s/f of event space, a 10,000 s/f observation deck and pool and a 10,000 s/f fitness facility for guests.

The project has also restored the terminal’s most iconic spaces, which will now include dining options such as Paris Café by Jean-Georges and the Ambassador’s Club, as well as a Lockheed Constellation L1649A Aircraft – one of four remaining in the world – that will now house a cocktail bar. The space also includes museum exhibitions devoted to the New York Jet Age, TWA’s history and the mid-century modern design movement.

The facility, which is currently the only on-site, AirTrain accessible hotel at JFK, will connect to Terminal 5 via Saarinen’s “Catch Me if You Can” flight tubes.

It employs energy-efficient design, with LEED certification, and will be powered through an off-grid power plant that is located on the roof of the north hotel wing.

The project was union built, with 3,700 construction jobs created, and will be union operated, with 795 total employees estimated throughout the entire facility.

MCR Development invested $265 million to construct the hotel. Prior to the hotel development, in order to attract interest from the private sector, the Port Authority oversaw a $20 million modernization of the building consistent with its historical landmark designation.

The Port Authority is also investing $8 million to connect the hotel to the Terminal 5 Parking Garage.

Additionally, MWBEs were awarded more than $50 million in contracts for the construction of this project.

The TWA project was assisted by more than $36 million in federal rehabilitation credits and $5 million in state historic tax credits.