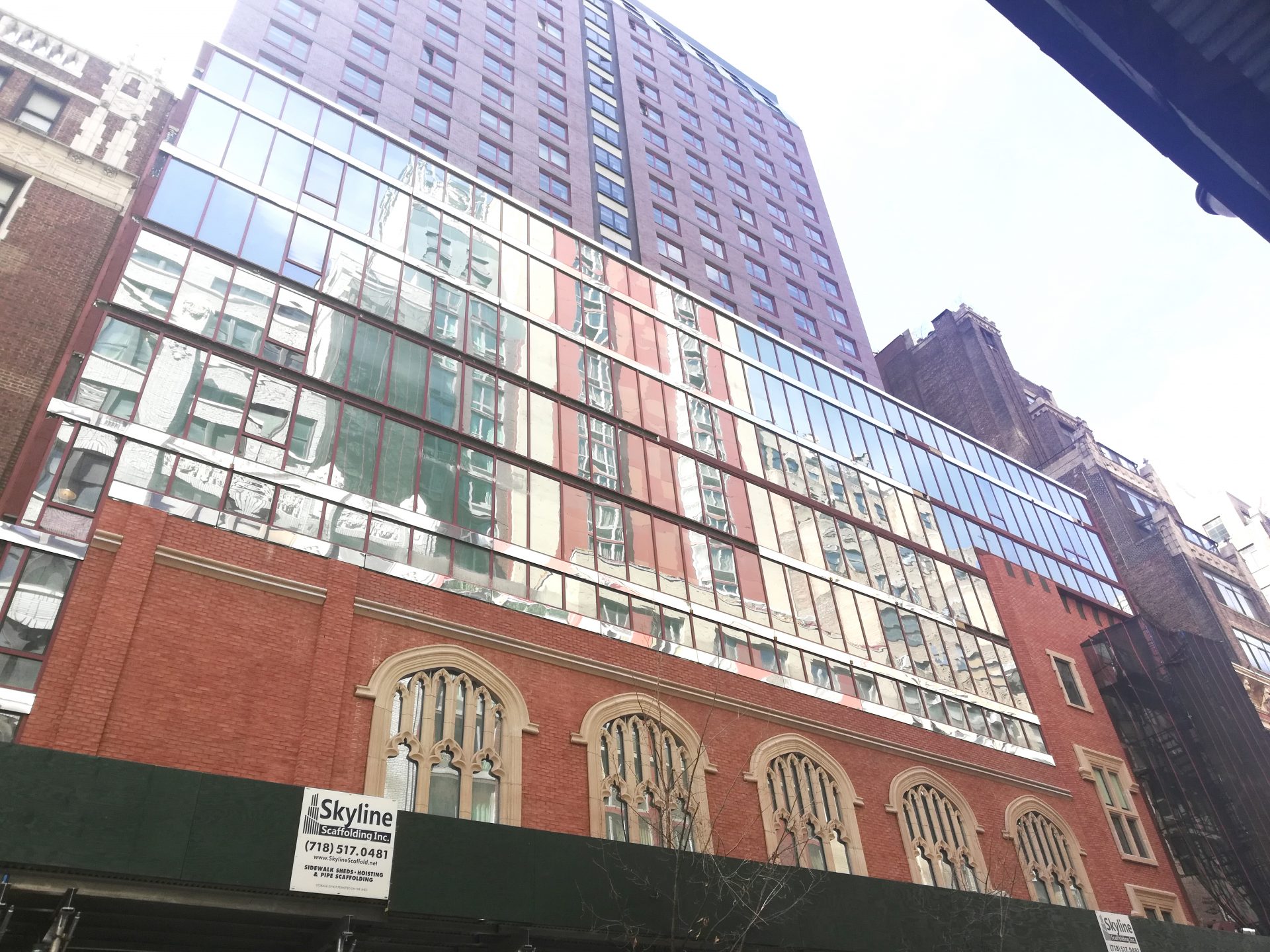 A unique new hotel has opened on the site of the former Christ Church Memorial at 338 West 36th Street.

Developed by Sam Chang with architect Gene Kaufman, the new 28-story Marriot Fairfeld Inn & Suites and Marriott SpringHill Suites were built atop the church in an effort to preserve the structure.

“As it was not designated as a landmark, we could have demolished the church which would have simplified much of the design and building process. But instead, we decided to preserve the structure and work with many of the existing elements, such as the pre-existing façade, to incorporate them into what stands today,” said Gene Kaufman, principal and co-founder of his eponymous firm.

“We did this for a number of reasons we felt were critical in order to represent both past and future in this new development.”

The Christ Church Memorial building was originally completed in 1905, and provided numerous services and amenities to residents of a crime-ridden and impoverished community.

The Hell’s Kitchen church “provided training and recreation for the youth who faced the temptations of vice at every corner,” according to one historian. It was also recognized at the time for its architectural significance, with its L-shaped parish house, Gothic-style windows and sideways placement due to the shallow building plot upon which it was built.

“We wanted to honor this history, not eliminate it,” said Kaufman.

Joe Restuccia of Manhattan Community Board 4, commented, “In the same way that the Christ Church Memorial buildings served generations of immigrants through two World Wars providing services to mothers and children, teens and soldiers, Sam Chang and Gene Kaufman firm felt strongly about going the extra mile to preserve a significant portion of the historic façade of the Christ Church Memorial, while building a hotel to meet growing tourist industry needs.”

The developer and the architect worked with Manhattan Community Board #4, which works with many developers to balance preservation and new development in Hell’s Kitchen, to fostered relationships in a neighborhood where the two are is developing several hotels

The project team went to great lengths to preserve the old church wall and overcame logistical and design-related challenges to protect the existing structure .

Efforts to remove and rebuild the upper portion of the wall were successfully undertaken. Both old and new brick was use in building the length of the hotel featuring the Gothic-style windows that helped define the original look of the church.

“Visually and architecturally, we felt it was an opportunity to bridge the gap between old and new,” said Kaufman.

“Not every project offers a chance to preserve a special part of New York’s history, and though this project didn’t require it, there were ample reasons to do so anyway.”