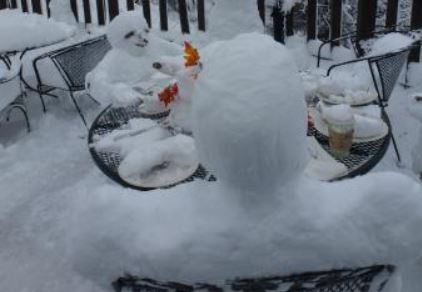 Winter is coming and NYC restaurants are feeling the chill

A new survey by the NYC Hospitality Alliance details a cold reality settling in over New York City’s restaurant industry, as 88 percent of respondents could not pay full rent in October, up from previous months’ reports and a signal that the sector’s crisis is far from over.

According to more than 400 survey-takers representing restaurants, bars, and nightlife venues across the five boroughs, 30 percent of these small businesses could pay no rent at all during October; 59 percent of tenants’ landlords did not waive or reduce rent; and 83 percent of businesses have been unsuccessful in renegotiating their leases as a result of the pandemic.

According to the NYC Hospitality Alliance, restaurateurs who could not pay full rent in October are also likely to owe back rent for September, August, July and previous months. These business owners have amassed significant personal debts, which impacts their prospects of saving their businesses and starting new ventures in a post-pandemic New York.

“Going on eight months, more than 24,000 restaurants, bars and clubs citywide that are so critical to New York’s economic and social fabric have been in dire straits,” said Andrew Rigie, executive director of the NYC Hospitality Alliance.

“Half of the industry’s 300,000 employees are still without jobs, and those numbers can’t improve while more businesses are permanently closing and leaving empty storefronts in our neighborhoods. With many venues still closed, new restrictions further limiting the operating hours of those open, and cooler weather making outdoor dining less feasible, New York City’s hospitality industry simply cannot wait: The Restaurants Act and the Save Our Stages Act need to be immediately passed by the U.S. Senate and enacted by the President without delay.”

Effective Friday at 10 p.m., bars, restaurants and gyms or fitness centers, as well as any State Liquor Authority-licensed establishment, will be required to close from 10 p.m. to 5 a.m. daily. Restaurants will still be allowed to provide curbside, food-only pick-up or delivery after 10 p.m., but will not be permitted to serve alcohol to go. The State Liquor Authority will issue further guidance for licensees as to what sales are continued to be permitted.

The Governor also announced that indoor and outdoor gatherings at private residences will be limited to no more than 10 people. The limit will be implemented due to the recent prevalence of COVID spread resulting from small indoor gatherings including Halloween parties. These gatherings have become a major cause of cluster activity across the state. Further, this public health measure brings New York State in line with neighboring states including Connecticut, Massachusetts and Rhode Island. This new rule is also effective Friday at 10 p.m.

“If you look at where the cases are coming from, if you do the contact tracing, you’ll see they’re coming from three main areas: establishments where alcohol is served, gyms, and indoor gatherings at private homes,” Governor Cuomo said.

The Governor took the actions amid a widespread increase in cases throughout the nation and an increase in New York, which was expected moving into the fall and winter seasons.

For full survey results, a link to the results are available here.