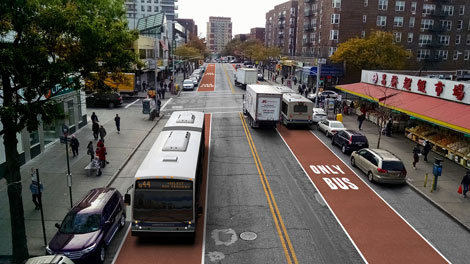 From MetroCards to park-and-ride to Select Bus Service, urban planning veteran Janet Jenkins has had a hand in it all.

The senior director of Transit Development at the New York City Department of Transportation, Jenkins has spent 25 years in urban planning.

After receiving her master’s degree in urban planning she began her career at the Metropolitan Transportation Authority in 1993. 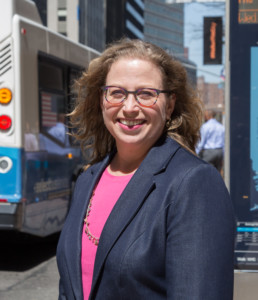 Jenkins spent the next 10 years working between the New York City Transit and MetroNorth departments on projects ranging from the implementation of the ubiquitous MetroCard to creating parking facilities at MetroNorth rail stations that encourage the park-and-ride style of commuting.

“That’s where I really started to learn how public transportation and infrastructure affects what we do here in the city,” Jenkins said of her time at the MTA.

After spending a decade in the public field, she moved into the private sector, consulting for developers and municipalities throughout the northeast before returning to the MTA in 2014 for another sting before taking on a role at at the DOT in 2016 to lead the Select Bus Service, or SBS, program.

The proposal, which began with a 2004 study on how to design rapid bus transit for the city, was finally introduced in 2008. The package treatment includes being able to pay prior to getting on the bus, designated bus lanes and traffic signal priority to improve bus service. SBS now has more than 15 routes and DOT is working with the MTA studying where the next generation of SBS routes should be applied.

But the process of choosing which route gets the SBS treatment requires a lot of evaluation.

“We look throughout the city at high ridership bus routes, bus routes where we think we can make a difference,” Jenkins said. “But one of the main criteria is how many people are riding the buses.”

Another criterion involves looking at “geographic equity” and diversity. Jenkins said that the DOT is also looking to ensure that SBS can serve all New Yorkers.

“People in the far reaches of the boroughs have the longest commute times in the country and they deserve better transit service,” Jenkins said. “People who live in neighborhoods with low service or alternatives, it’s really a social equity issue. People need to be able to get to their jobs on public transportation in a reasonable amount of time.”

While many city commuters are packing into the subways, Jenkins said there’s still a need for alternative reliable public transportation services, like buses.

“[We have] two goals, to make the bus service more attractive so that people will want to ride and to make sure the bus is coming regularly enough that you can really count on it,” Jenkins said.

With the spread of SBS, the benefit is seen through the DOT’s impact studies. According to the DOT, SBS routes have seen a 10 percent increase in ridership, a 15 percent increase in bus speeds through signal priority, a reduction of crashes by 20 percent and a customer satisfaction rate of 95 percent.

Outside her work with the Select Bus Service, Jenkins is also involved in helping the MTA come up with a mitigation plan for the expected L train shutdown beginning April 2019 and a bus network redesign that takes a holistic approach at how to rejigger the city’s bus routes. And overall, all of Jenkin’s work falls under how the city is aiming to improve street safety under Vision Zero.

“Our goal of reducing fatalities to zero is the main driver behind a lot of what we do,” Jenkins explained of the agency’s purpose. “Whenever we do street improvement projects, bike lanes or bus priority projects, that safety issue is the priority on our list.”

The bigger picture of Vision Zero and Jenkin’s work is to create a safer and improved neighborhood for New Yorkers to live in.

She pointed towards a 2013 DOT post-implementation study with the BX12 SBS that started in 2008. According to the study, sales rose steadily along the Fordham Road stretch the SBS traversed and that the third year after implementation saw business sales increase by 71 percent.

“I don’t know if we can take the credit for that, but we think that by bringing more people on a high-level service into a neighborhood increases the benefit for businesses and residents,” Jenkins said. “If you can get on a bus to take you to where you shop or where you work, that’s a real asset to the neighborhood.”

More importantly, the DOT is tasked with making these neighborhoods safer to move through with whatever mode of transport you prefer.

With urban design, the city has seen an influx of subway alternatives, like Select Bus Service, bike-sharing and a network of bike lanes, and more pedestrian-friendly street improvements. And for Jenkins, a properly devised transit design makes for a more attractive neighborhood.

“Whether you want to take a bike, a bus, or a for-hire vehicle, we want you to be safe in doing that,” Jenkins said. “For me, I think it makes a realty positive neighborhood. I want to live in a neighborhood that’s a comfortable place to walk and bike.”