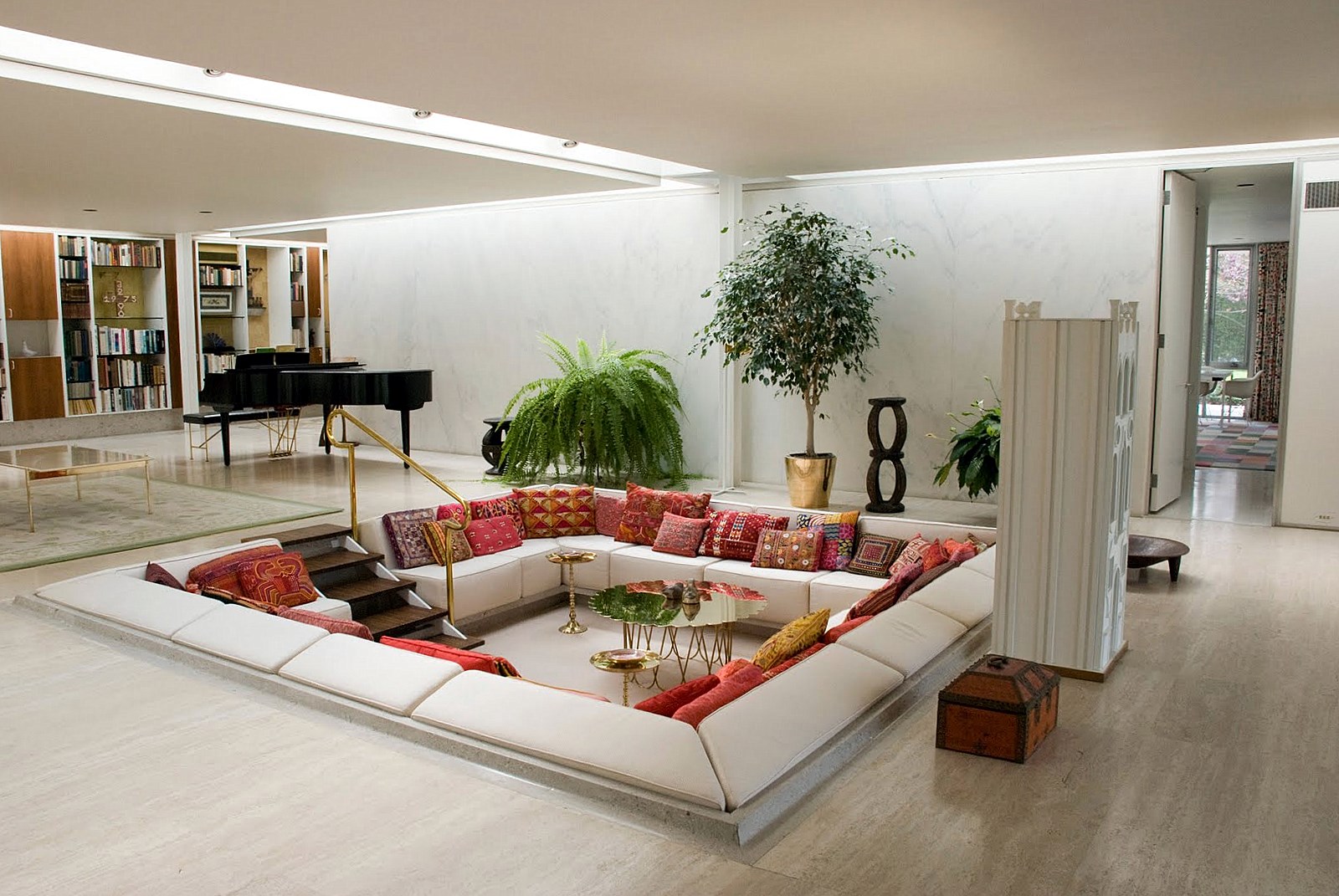 That 70’s style still lives in lobbies and living rooms

When the stars of AMC’s Mad Men had to puff on a Lucky Strike in the opening episode, series creator Anthony Weiner got Don Draper and the gang some herbal cigarettes to accommodate the ban on smoking in the workplace.

That’s kinda how Scott Aaron, principal at Socius Development Group, felt when he decided he wanted to capture the essence of downtown New York in the 70s and early 80s in his new rental building at 56 Fulton Street in the South Street Seaport.

“The aesthetic from back then was a little bit more raw and real than the overproduced things you see today,” said Aaron. “I wanted to do something in this building that felt very organic and something that hasn’t been seen in a residential building before.”

Mad Men has been credited with influencing everything from fashion and culture to children’s names – would you believe Betty was among the most popular girls names of 2010?

As it begins its last season marching its Peter Pan collars into the 70s, Brokers Weekly thought it would be fun to find out how much the show has influenced the real estate landscape and what relics from the decade that style forgot have made a comeback.

While he confesses to never having seen an episode of Mad Men, Scott Aaron believes this season’s Sterling Cooper crew would get a kick out of the funky downtown 70s arts scene that he commissioned interior designer Andres Escobar to create for 56 Fulton.

“It’s photography based inspiration from the downtown New York 1970s and 80s scene. Think Patti Smith, The Ramones, Andy Warhol ,” said Aaron, a partner on the venture with the Brauser family which has owned the site, currently a parking garage, for over 30 years.

“I was walking through SoHo looking through photos at the Morrison Hotel Gallery and the John Varvatos store and was inspired to do something that was very downtown New York and thought the candid images of iconic rock and roll artists from that era were really edgy. I brought the idea to Andres and he came up with some really amazing designs and we went with it.”

The development team is working with New York based Rock Paper Photo, curators of iconic images by photographers who have captured “ unforgettable moments and the legendary personalities who defined them” to select over 100 different pictures that will set the tone of the building.

Demolition is scheduled to start this summer and the 23-story, 120-unit rental should open in the spring of 2016. It will have ground floor retail, a residents club on the 23rd floor and an outdoor roof deck.

The building has been designed by Garrett Gourlay of Goldstein Hill and West with whom Aaron worked on previous projects, including 100 West 18th Street, also a Brauser family property. The base has been designed to look liked a 70s era Tribeca warehouse with a six-story masonry podium, large, multi-paned windows and a glass tower above facing north to take full advantage of the views that come with a double-wide site surrounded by low-lying buildings.

It is an 80-20 tower and the layout will include 20 percent affordable and 80 percent market rate studios, one and two bedroom rentals, half of which will have outdoor space in the form of balconies or terraces.

“We are fortunate that the Brauser Family happens to have a site that offers great light and air and amazing views of the East River, the Seaport and the Brooklyn Bridge,” said Aaron.

“When you walk through the building, you will see interesting shots of artists and musicians like Blondie, Jimmy Hendrix, Basquiat, Keith Richards, Billy Joel and Lou Reed. It’s just great imagery from the days before everything became so processed. We didn’t make a conscious decision to design a building from the 70s, but the images we are using are very 70s, very candid and interesting. It is as much photography-inspired as it is era-inspired.”

Ask Scott Bromley, designer of the legendary Studio 54, it’s all life’s pendulum swinging back the other way.

When he designed the Italian furniture store Abitare on 57th Street in 1977 (later re-incarnated as Crazy Eddies video outlet) he used butt glass — six foot plates of glass held together with clips.

“That was the first time it was used in New York. Now you see all these new buildings that have butt glass — it’s the 70s all over again,” said the now 75-year-old Bromely.

The seventies were the age of minimalism and the start of high tech, according to Bromley, who recalls using steel, vinyl tiles and subway grates to decorate the hippest homes of the day.

Living rooms started to open up (as in open plan, get it) to the dining room, then the kitchen to create one big entertainment space where the cool kids could lounge on everything covered with sisal and pillows.

“When we designed Studio 54, we used black Astro Turf for the flooring of the main lounge … the designers who were leading the pack back then were all trying to use different materials on floors and walls. It was all hard surfaces and lots of black glass and black appliances.

“And black is back. We are doing a job in [Extell’s] One57and that lobby has huge metal panels hanging from the ceiling and the lighting is bare lamps encased with perforated metal. I was amazed when I walked in there. If you are looking for the 70s today, it’s all over the place.”

While, like Scott Aaron, Bromely is not a fan of Mad Men, as a designer he appreciates the fascination the series inspires in the era. “People in one era are always looking at another era. I loved the 70s and the 80, but I also like tomorrow.”

There are homes today designed in what is technically known as a Midcentury Modern style – like the groovy, multi-colored Chappaqua, NY, glass house designed by Edward Larrabee Barnes that sold last year for $1.3 million – but Bromely says folks don’t generally see themselves as 70s holdouts.

“They don’t ask you to design something from the 20s or 60s,” he said. “They just see something they like and ask you to incorporate that in their design. It usually just looks that way because tastes always come back in some shape or form.”

“Now it’s back,” said Fernandez, a child of the 70s who said the disco ball is also “a necessity in any bar or club today.”

While she credits yesterday’s designers for pushing their inspiration to the max, she said today’s furniture designers have reintroduced the population to clear plastic, creating classics like the Louis Ghost Chair from Phillippe Starck.

Scandinavian style that poured into the market like a three-Martini lunch is also back in vogue, as are bright fabrics and prints, wood paneling and bright wall colors.

“The seventies décor defines an era that was about abundance and partying,” said Fernandez, who recently toured a Manhattan home that she said screamed “single seventies bachelor.”

“Walking through the home, you saw skeletal remains of stone waterfalls, a huge fireplace with a picture window facing thick foliage obstructing the city view. But the piece de resistance was the Shag carpeting on the wall. You just knew this place was a scene straight out of Shampoo.”

Sounds not unlike Don Draper’s new apartment 17-B — a high-rise with a white-carpeted sunken living room, a fireplace centerpiece and a kitchen that’s a case study of Midcentury Modern.

Retro grass cloth wallpaper and curtains that hang in the living room are back; teak built ins, not so much. Don’s black leather lounge chair and magazine rack could be right out of a 21st century design mag. Glass-topped coffee tables bring today’s home decorators a touch of déjà vu — waterbeds, not as big a hit as they were back then.

Agent Allison Dubuisson, of the Gilad Azaria Team at Douglas Elliman, is selling an East Village listing right now that she said is a “good example of tasteful 70s influence.

“The seller has a long professional history in fashion retail and her unique style came through in her lighting and some of her furniture,ˮ said Dubuisson, who emphasized the look with styling for the photo shoot that included faux fur and sequined pillows and white Jonathan Adler pottery.

“I replaced her previous bulky desk chair with a Philip Starck transparent Ghost Chair which provides the illusion of space. Clear or glass furniture tends to help make a room feel open and airy,ˮ explained the agent.

Although it worked for her East 6th Street unit (see this week’s new listings column), Dubuisson added, “While some aspects of 70s design can make a space more chic, too much of one style can be too busy and too much of a mind overload for a potential buyer.

“Design elements that simply do not work include patterned wallpaper. It’s too personal and often makes a space appear smaller, definitely a faux pas when trying to sell a Manhattan apartment under $1 million.ˮ

Whether it’s sliding doors or orange-painted walls, architect/designer Jerry Caldari says it should always be fun.

“The 70s were an over-the-top time and a decade of flower children. It was the me decade,” said Caldari, a member of Bromey’s design team when he did Studio 54 and now his partner at Bromley Caldari Architects.

“People should make their home comfortable and functional and a respite from the world. However you want to do it, it’s your business. But no-one asks for a waterbed anymore.”