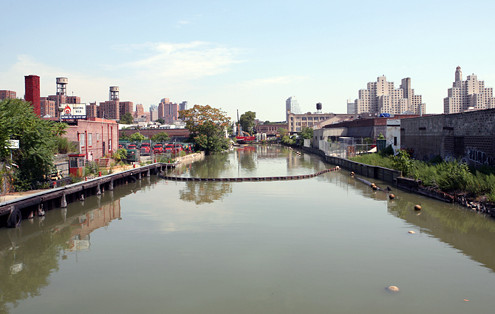 Though generally overshadowed by nearby Brooklyn locales such as Park Slope, the neighborhood of Gowanus demonstrates numerous attributes that point to its continued growth, according to the newest research report from GFI Realty Services.

In the report, titled Going Gowanus, GFI finds that, while its commercial revitalization has not yet reached the levels of some of its neighbors, Gowanus’ designation as a Superfund site, combined with expected changes in zoning to allow for increased residential development, has resulted in a significant increase in real estate investment.

For years, Gowanus’ polluted, eponymous canal had restrained investment activity in the area. The Environmental Protection Agency’s Superfund designation has laid that issue to rest, and a $500 million cleanup is currently underway.

Notably, the area’s attendant real estate resurgence is not just projected, but has already begun, evidenced by the Gowanus’ total real estate investment sales hitting $181 million in 2015 — a 32 percent year-over-year jump from 2014.

“Gowanus has flown somewhat under the radar, but the area is already on the upswing, as evidenced by the increased investment activity that’s taking place despite rising prices,” said Justin Fitzsimmons, research analyst of GFI Realty Services.

“As the area continues its revitalization, we can expect real estate investors to capitalize on spillover effect from Park Slope, Cobble Hill and other surrounding neighborhoods, and the area’s likely rezoning will truly take Gowanus to the next level in terms of desirability.”

While the zoning changes under consideration would allow for residential development, the area’s current “M” zoning has actually opened the doors for other sectors of the market.

These investors have acquired “M-zoned” lots that previously housed manufacturing facilities, and repositioned them as hospitality and commercial properties that form the backbone of the area’s economic uptick.

The new facilities amenitize the surrounding prime neighborhoods, which helps them thrive and hastens the impact of the spillover effect.

This development activity has been most pronounced in the hospitality sector. The area is now home to national flags such as Holiday Inn Express, Fairfield Marriott and Super 8, and it was precisely Gowanus’ lack of residential zoning that allowed for hoteliers to convert vacant lots and warehouses into temporary lodging for visitors.

In addition to the chain lodging that has gone up in the neighborhood, Gowanus is home to numerous boutique hotels, with others in the development pipeline.

The most prolific Gowanus hotel developer is Alec Shtromandel, who has opened the doors to the Union Hotel at 611 DeGraw Street; broken ground on the Gowanus Inn & Yard at 645 Union Street, just east of the corner of 3rd Avenue; and filed plans for the Baltic Huis, a seven–story, 34-key hotel coming to 489 Baltic Street. Other notable hotel developments include Globiewest Hospitality’s Hotel Le Bleu, as well as a 578-key project under construction a block away at 399 3rd Avenue.

Other developers such as Sam Boymelgreen, Miriam Chan and RJ Hospitality have filed plans for new hospitality developments, but have yet to break ground.

“The economic resurgence has been most pronounced in terms of hotel product, but Gowanus has also seen a good deal of office development, including Sampson Management’s 90,000 s/f industrial-to-office-conversion that is fully leased to tenants including Coworkrs,” added Fitzsimmons.

“With hotels already coming in droves and anticipation building for zoning that will bring in new residents, the area’s retail and restaurant scenes have also accelerated, with a range of hip establishments opening to meet the emerging demand.”

One of the first signs of Gowanus’ growing retail sector was the opening of a 56,000 s/f Whole Foods in late 2013.

In the wake of the store’s opening, a range of retail amenities, including boutique spas, yoga studios, a rock climbing gym and craft bars, have opened in the area to meet the growing demand.

At the same time, inviting eateries have come to the area, including Dinosaur BAR-B-QUE’s first
Brooklyn location on Union Street, and Freek’s Mill, a farm-to-table restaurant located within blocks of the canal.

In addition to real estate investors and retailers, city agencies have also been active in gearing up for Gowanus’ continued ascendance.

Notably, the NYC Parks Department has drafted a proposal for the Ennis Playground reconstruction, a $2.5-million makeover to the recreation area that serves an example of how city planners are preparing for a boom that will bring in new residents, including children.

Similarly, P.S. 32 is receiving a major, 56,856-square-foot expansion that will significantly increase the school’s capacity.

The Department of Transportation’s freshly painted bike lane on a stretch of Bond Street also serves to equip the neighborhood for a surge of new bike-riding residents migrating to the neighborhood.

“The fact that much of Gowanus has historically been comprised of industrial facilities will actually ensure that the neighborhood’s transformation is more seamless than those of many surrounding areas, as the influx of investment will cause minimal residential displacement,” added Fitzsimmons.

“Once the Superfund cleanup is complete and the area is rezoned, we’re sure to see a greater influx of developers eager to capitalize on the area’s improved demographics, which will unlock Gowanus’ unlimited potential.”