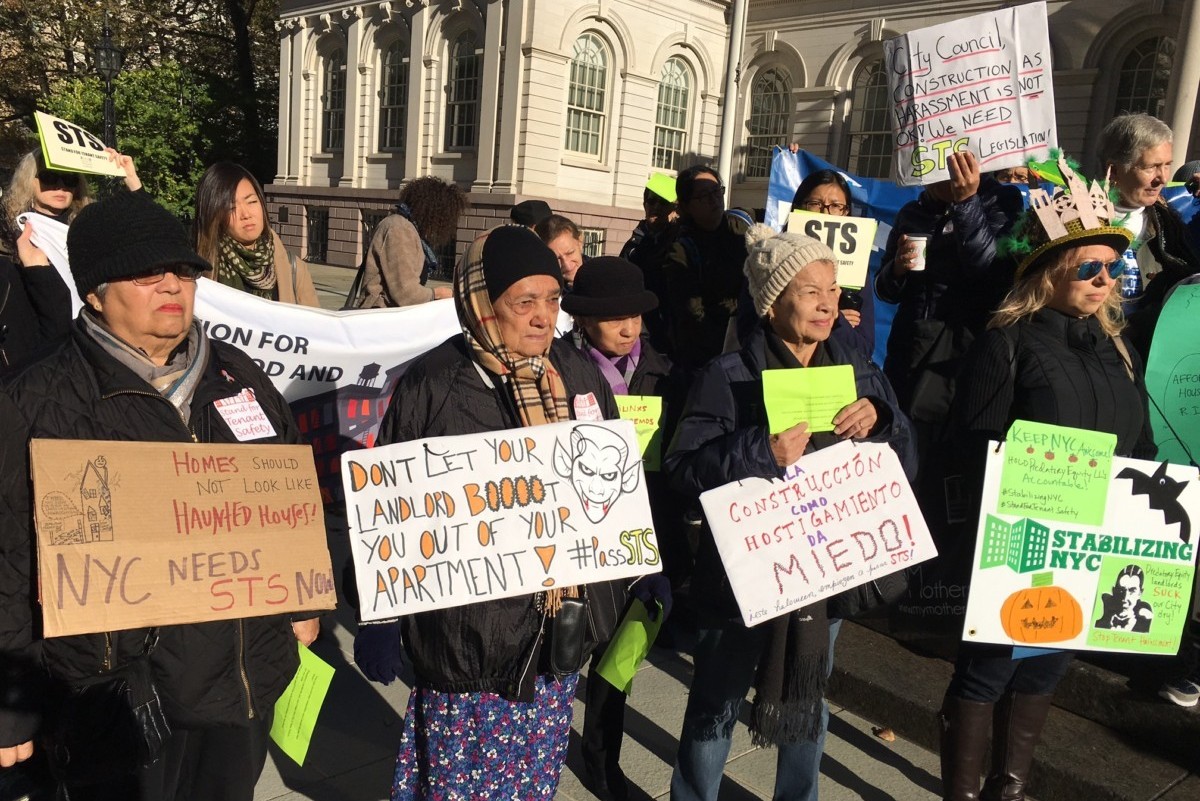 On Halloween, dozens of tenants holding spooky signs rallied at City Hall to bash landlords as vampires if they engage in predatory equity.

The event was held prior to a City Council hearing on a package of bills that were aimed at stopping the practice.

Predatory equity is generally defined as when a landlord purchases a property with a high level of debt that could only be expected to be paid if the owner aggressively tries to get rid of rent-regulated tenants and replace them with higher paying ones.

Tactics that could be considered aggressive by landlords include harassment via frivolous lawsuits, a lack of basic maintenance, illegal fees, constant buyout offers or construction that’s unsafe or seems gratuitously disruptive.

One of the City Council members pushing legislation, Dan Garodnick, gave the example of Stuyvesant Town’s sale to Tishman Speyer a decade ago as a prime example of predatory equity.

“This is when landlords overpay for buildings with the speculation that they will be able to deregulate units and drive out tenants,” he said. “You’re not making them enough money, so they will try anything to get you out of there. This is harassment.”

The other council members pushing bills were Ben Kallos, Ritchie Torres, Vincent Gentile, Helen Rosenthal and Jumaane Willians, who’s also chair of the council Housing Committee. One of the bills would require the Department of Housing Preservation and Development (HPD) to create and maintain a watch list of owners who’ve engaged in predatory activity.

Another bill would establish a presumption – albeit a rebuttable one — of tenant harassment at buildings with a debt service ratio of less than 1.05, along with acts of harassment or neglect by the owner.

Both of those bills are sponsored by Garodnick, Torres and Williams. A third, sponsored by Kallos, would expand an existing HPD program which allows the city to foreclose and sell distressed buildings to pre-qualified third parties. The program would be expanded to include buildings whose owners have large numbers of open building violations.

Another bill, sponsored by Gentile, would increase the minimum civil penalty for immediately hazardous illegal conversions from $2,400 to $15,000 in instances of three or more units than what is legally allowed. It certain cases, penalties that go unpaid would make the property eligible for a lien sale.

The bills were rejected by the HPD during the Council hearing as either duplicative of regulations or practices currently in existence or near impossible to implement.

Vito Mustaciuolo, HPD Deputy Commissioner for the Office of Enforcement and Neighborhood Services, had said that his department was already “aggressively addressing” complaints of harassment and investigating owners suspected of trying to deregulate units.

But, he argued, not all landlords who are overly optimistic about potential returns end up resorting to harassment and HPD doesn’t have a crystal ball to determine which ones might.

“Trying to make those predictions by tracking financial transactions in which HPD is not a party would be extremely difficult and costly,” Mustaciuolo said.

Another obstacle, he added, would be “the perils of predicting real estate markets in general.”

He also said that deciding which owners would belong on a watch list would require access to complete financial information to transactions, which even in official records, isn’t always available. He was also concerned a watch list might be “over-inclusive,” including so many buildings that it would be inaccurate.

On the other hand, Mustaciuolo said, in another way the list would be under-inclusive. For example, he said, it’s not just over-leveraged landlords who neglect buildings. Some pay their debts monthly and still allow their properties to fall into disrepair.

Still, he added that the HPD shared the council’s concerns about tenant harassment, and hoped to continue discussions on the issue.