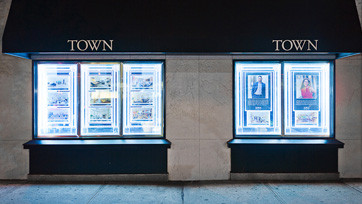 Uber broker Brenda Powers has landed at TOWN Residential after a month-long stint at Compass.

Heiberger said, “Brenda is primed for tremendous growth and continued success through the TOWN platform, which extends to New York’s sixth borough of Miami through our strategic alliance with Fortune International Group.”

A 20-year veteran of the residential sector,  Powers ended a long-term partnership at Sotheby’s International Realty with Elizabeth Sample to make the switch to Compass where, she previously told TRD,  she was moving to  help expand her business across the country.

In a brief statement, Compass said, “Compass disassociated itself with Ms. Powers. We wish her well.”

Powers had no comment on her departure from the tech-driven brokerage. In a prepared statement she said, “I’m excited to work closely with honorable, passionate mentors and global industry leaders Wendy Maitland and Dorothy Sexton.  Furthermore, I am thrilled for the opportunity to work with Andrew Heiberger, a visionary with an unparalleled understanding of today’s evolving real estate services industry.

“TOWN’s fully integrated platform which offers historical, cultural and technological savvy; legal and ethical knowledge; and the essential understanding for absolute discretion and security coupled with its five star concierge service, allows me to truly maximize my career potential.  TOWN’s resources and support create the foundation for me to serve the needs of my global clientele in the sophisticated, effective and efficient manner that reflects the depth of my experience, culture and values beyond any other brand.”

Over the course of her  career, Powers has sold in excess of $2.2 billion worth of luxury properties. She started out with Corcoran in the 1990s, later partnering with Sample and moving to Brown Harris Stevens and then Sotheby’s in 2011.

She and Sample worked with Wendy Maitland in the re-positioning, branding, marketing and sales of Canyon Ranch Living Miami Beach on behalf of Lehman Brothers.

She is fluent in four languages and holds a Bachelor’s degree from the Académie de Bordeaux in France, as well as a degree in hotel management from the Centre International de Glion in Switzerland.