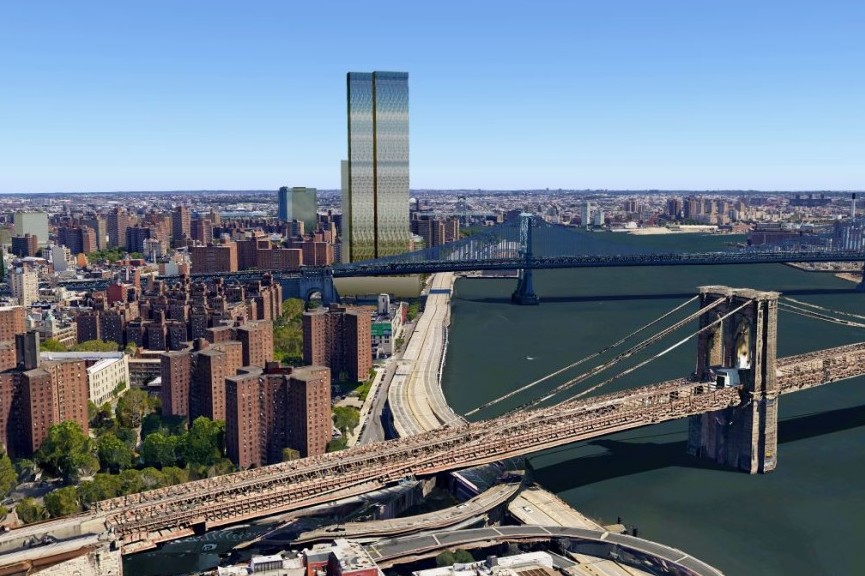 One Manhattan Square, Extell Development’s condo project on the Lower East Side waterfront, is attempting to attract would-be residents with an extensive amenities package that includes unusual offerings such as an adult treehouse and infrared saunas. The 800 ft. tall tower, which has 100,000 s/f of outdoor and indoor amenities, is designed to direct residents away from a solitary existence.

“People want to be friends with their neighbors. This isn’t the city of many years past when you quickly get out of the elevator and no one says ‘hi’ to each other. We really thought about creating a community and a sense of community,” said Anna Zarro, Extell’s senior vice president and director of residential sales and leasing. 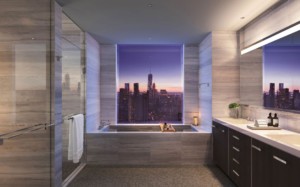 The amenities package for the project is extensive. It includes a full-sized basketball court, a two-lane bowling alley, a squash court, a swimming pool, a golf simulator, a fitness center, a spa with a Turkish bath and private treatment rooms, a theater and performance space, a cellar bar and a demonstration kitchen.

“We wanted everything to be beautiful and luxurious but also to make sense, and from a practical standpoint to be the sort of areas that people would want to gather in, have a sense of community and enjoy entertainment and culture,” Zarro said.

Outside, Extell is attempting to pull off the double-jointed goal of building a contextual building that stands a few hundred feet taller than everything around it.  “We wanted to be in context as much as we can since we’re 80 stories tall. You know, in an area where there isn’t anything even close to that height. So it was important to be contextual and considerate of that,” Zarro said.

“But I think, also, (we wanted) to be kind of a beacon for what could be new in the area. As the leader of that, we wanted to be mindful and respectful of the aesthetic, and make sure that this is something that is beautiful. I think one of the top considerations is really: ‘How do we make this building beautiful, as beautiful as it is tall?”

Extell’s pitch appears to be resonating with buyers. Last March, Bloomberg reported that the company went into contract on 100 apartment units just four months after launching sales. The firm also increased prices for the 815-unit condo project, defying a slowdown in the luxury market driven by restraint from buyers. However, Extell’s days of resisting gravity may soon come to an end. 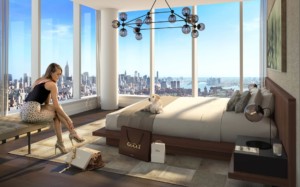 “We did have several price amendments in an upward direction since we launched. We may not be pushing another one right away,” Zarro said.  “But we do continue to discuss it. It’s interesting, because when it rains, it pours. (If) somebody’s very interested in a certain layout (and) we’ll do a succession of deals on that sort of apartment, then we have to stop and re-evaluate and say, “Okay I know we have 815 apartments in total. We’re really burning through this line. We don’t have so many left. Maybe we need to pull back and consider whether or not to adjust prices.”

Extell declined to reveal pricing for the five penthouse units in the property (two are duplexes, three are single-floor units). However, according to the Wall Street Journal, a five-bedroom, four bath duplex in the property sold for $13 million.