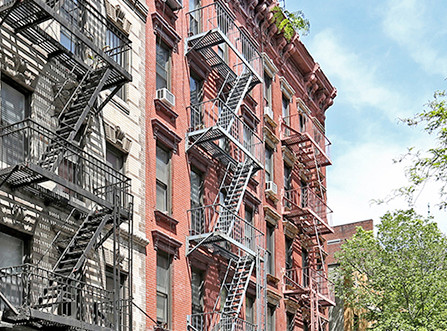 The Hudson Companies has closed on its $50 million purchase of a six-building Bergen Beach portfolio.
Originally built in 2004 and 2006 under a New York City Housing Development Corporation (HDC) program, the sale of the Bergen Gardens Portfolio included a multifamily complex and retail pad assemblage.

The portfolio — which includes 1061, 1073, and 1089 East 73rd Street and 1054, 1070, and 1086 Bergen Avenue — traded at $289 psf.
“Brooklyn has quickly established itself as a destination to live, work, and shop, thus pushing investments to areas previously overlooked, such as Bergen Beach,” said Cushman & Wakefield’s James Nelson who, along with colleagues Mitchell Levine, Alex Svetlakou and Ed Gevinski, sold the property on behalf of The Mattone Group and Gartenstein Properties with Victor Gartenstein, David Gartenstein and Steven Gartenstein.
Eastern Union Funding senior managing directors David Metzger and Nate Hyman arranged $35 million in acquisition financing for the deal.
The six, walk-up apartment buildings have 144 units, all subject to a regulatory agreement with the HDC and are also rent regulated as a result of the 421-a tax abatement. The property was delivered 98 percent occupied.

Eastern Consolidated is seeking bids for a package of nine retail condo storefronts at the base of a luxury loft condominium at 262-272 Mott Street in Nolita, and a separate five-story mixed-use building at 135-137 Thompson Street in SoHo.
The bids are due June 16.

The properties can be sold together or separately. The asking price for 262-272 Mott Street is $27.5 million, and the asking price for 135-137 Thompson Street is $17.5 million.
Exclusive broker Adelaide Polsinelli, senior managing director and principal, is marketing the properties.
The package of retail condos at 262-272 Mott Street offers over 120 feet of frontage along Mott Street with eight of the street-level units featuring 12-foot ceiling heights and one lower level space featuring a 20-foot ceiling height. Unit sizes range from 371 to 2,526 s/f.
“The package at 262-272 Mott Street is one of the largest portfolios of contiguous retail space available for sale on one of the hottest streets in Nolita,” Polsinelli said.
“This is a great opportunity for an institutional investor or a 1031 exchange buyer who wants to invest in a retail portfolio. Unique and exciting retailers are currently leasing space in the building, which offers visually stimulating storefronts and exceptional 19th Century details.”
Stores currently leasing space include Fjallraven Artic Fox, a Swedish outdoor brand; Tai Rittchai, a high-end jewelry line; and Rebecca Hossack gallery. Retail rents average $250 to $280 on the block.
The mixed-use property at 135-137 Thompson Street features 25 feet of frontage and two occupied ground floor retail spaces. The remainder of the building is comprised of 15 apartments.

Tulfra Real Estate and The Hampshire Companies have sold a fully-leaserd New Jersey industrial building for $17.5 million.
2 Cranberry Road in Parsippany, NJ, is a 180,411 s/f building leased to a range of tenants utilizing space for warehouse, light industrial, research & development, and production.
The property benefits from its recent $2.1 million renovation and nine new tenants have signed leases at the property since its repositioning was completed in 2014.

Jeffrey Dunne, Kevin Welsh and Brian Schulz of CBRE Institutional Properties in collaboration with Steve Sander of CBRE’s Saddle Brook office represented the sellers.
Igor Derbaremdiker, director of Dispositions for The Hampshire Companies commented: “Premium pricing for this asset played a pivotal role in Hampshire’s decision to monetize the investment at this time. Considering the complexity of the deal structure, and months of negotiations with a particular private buyer group, we have successfully transacted and delivered tremendous results, achieving superior investment return on committed capital for our investors.”

Freehold, NJ-based Monmouth Real Estate Investment Corporation, one of the oldest public equity REITs in the US, announced the acquisition of a new 225,362 s/f industrial building at 125 North Troy Hill Road, Colorado Springs, CO for $28,845,500.
The property is net-leased for 10-years to FedEx Ground Packaging System, .
Michael P. Landy, president and CEO, commented, “This new Class A built-to-suit distribution center is situated directly across from the Colorado Springs Airport and is in close proximity to Interstate 25. Colorado Springs is the home to the United States Airforce Academy and the U.S. Olympic Training Center.
“This transaction marks our fifth acquisition for fiscal 2016. Our property portfolio now contains 15 million rentable square feet with several additional acquisitions and property expansions currently under construction.”

Cushman & Wakefield is selling a 39,896 s/f Class A office building owned by Santander and located at 1535 Richmond Avenue in Staten Island.

A team led by executive directors Stephen R. Preuss and Michael DeCheser, along with director Shaya Deaton are representing ownership.
“1535 Richmond Avenue is a dependable investment benched in a matchless retail location,” said Preuss.
“The triple-net leased, office building has an attractive cap-rate, ideal for a 1031 exchange buyer or investor seeking a low maintenance, high return asset and a corporate guarantee.”
The brokers are asking $13,950,000, or $349 psf, for the fully occupied building.
It features a Culligan drinking water purification system, granite with insulated gold dust glass on the exterior as well as thermally broken aluminum and insulated glass windows and doors.
It is currently sub-leased to multiple tenants.