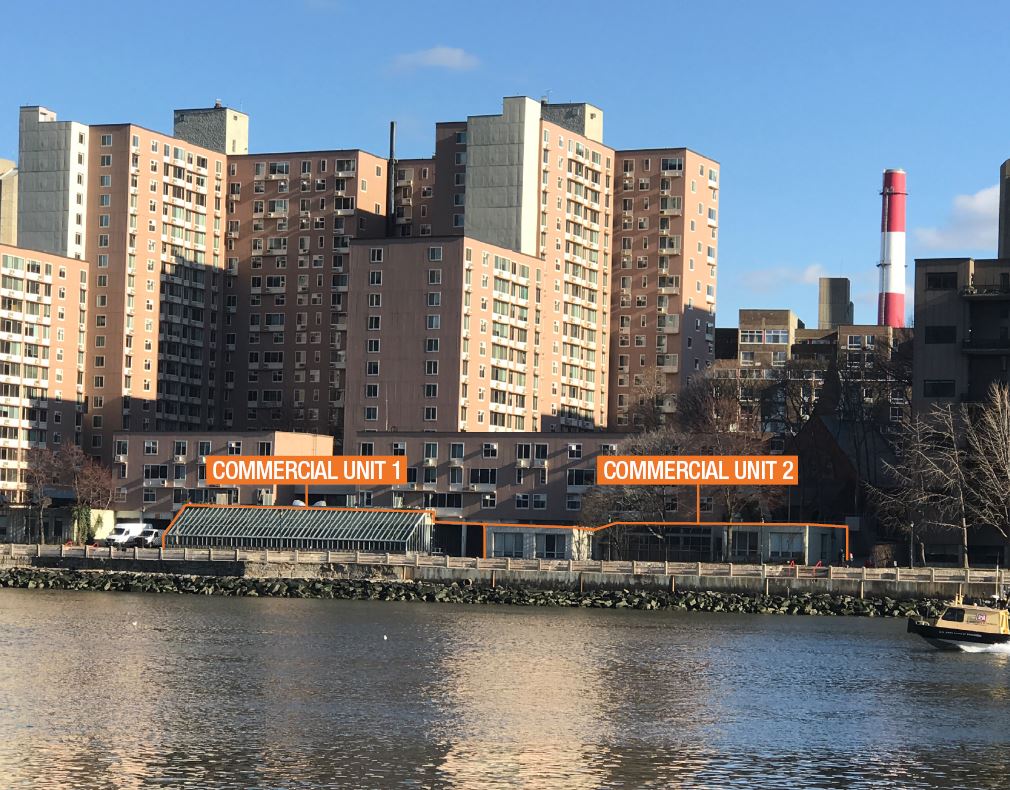 The commercial units at 545 Main Street are available separately or combined.

Located at the base of the 400 Apartment Island House residential building, one unit — previously used as a swimming pool facility and now with a moth-balled in-ground pool — is 12,371 s/f with 18 ft. ceilings and an atrium looking out at Manhattan.

The second unit is 6,344 s/f, with a small commercial kitchen and office space.

“Our Island House commercial space is the only waterfront commercial space available on Roosevelt Island, boasting unobstructed direct visibility from the FDR Drive, and presents a fabulous opportunity for the right user to have an immediate presence on the Island, with close proximity to the Cornell Tech campus and the influx of affluent home buyers moving on to the Island,” said Polsinelli, Senior Managing Director and Principal of Eastern Consolidated.

The commercial units are permitted for restaurant, retail, community or office use.

The Cornell Graduate Tech campus opened the first of three building last September and the island’s first hotel is slated to open in 2019.

Currently home to 16,000 residents, the Island will welcome an academic community of nearly 2,500 when the $2 billion tech campus is fully operational. At full build, it will have two million square feet of buildings and 2.5 acres of open space on a 12-acre campus, serving more than 2,000 graduate students and hundreds of faculty and staff.

EPIC Commercial Realty has been retained to sell 220 East 134th Street, a commercial building with development rights in Mott Haven.

The six-story south Bronx building has 112,190 s/f of development rights (as-of-right residential and can be delivered vacant.

Elya added, “One option to develop the property is to fully utilize the residential air rights for a multi-family development; an investor can also choose to implement the proposed plans for a 16-story mixed-use building consisting of a 75-apartment free market residential portion and a 118-room hotel portion.

A Chelsea property built as tribute to the Cushman family is being listed by Cushman & Wakefield.

The five-story Donac at 402 West 20th Street was built in 1897 for Cushman scion Angelica B. Faber in tribute to Don Alonzo Cushman, who developed a large chunk of the Chelsea neighborhood in the 1830s.

As a dedication to Cushman’s portfolio of buildings that were set back 10 feet, the Donac’s architect, C. P. H. Gilbert, followed suit in matching the setback line and incorporating a curved façade.

The 6,400 s/f property is configured as five floor-through two-bedroom apartments and one studio.

Cushman & Wakefield’s senior managing director Brock Emmetsberger said the majority of the property will be vacant upon sale.

“The building still contains a tremendous amount of detail,” Emmetsberger said. “That character is always in high demand with investors and to residents who are looking to live in the Chelsea Historic District.”

“I think anyone who walks past it will see how it stands out, not only on the block, but in the entire neighborhood,” Emmetsberger said.

The building, which has remained under the same ownership for 35 years, is listed at $9.25 million.

The property consists of two 20.5 ft- wide adjacent residential buildings which, according to Besen’s Greg Corbin, can potentially be combined into one building totaling 9,600 s/f, with 41 ft. of frontage. After excavation, the property could total over 13,000 s/f.

“The West Village continues to be Manhattan’s most desirable neighborhood, and investor demand for prime rental buildings in the area is extraordinary” said Corbin.

The Children’s Museum of Manhattan has purchased 361 Central Park West as the site of is future home.

“CMOM is currently at capacity at our 83rd Street location and we had been actively looking to move to a bigger home. The new building will allow us to serve even more children and families across the City,” said Andrew S. Ackerman, executive director.

For the next four years, the museum will continue at its current home in The Tisch Building at 212 West 83rd Street. The new building is expected to open in late 2021.

361 Central Park West at the corner of 96th Street is a landmarked structure and former church designed by the Beaux-Arts architects Carrère & Hastings.

Kleinberg Kaplan represented the Children’s Museum in the $45 million purchase. For the past several years, Andy Chonoles, the firm’s managing partner, was a member of CMOM’s Real Estate Committee, which provided guidance with respect to the museum’s search for a new home.

Amit Doshi of Besen & Associates and Richard Torres of RAS Equity Partners, have been retained to sell a Bronx development site. 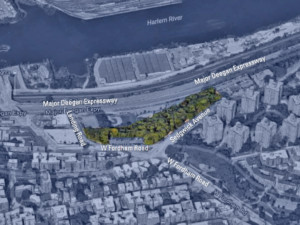 “A residential site with a commercial component would be the ideal development due to high demand for residential units,” said the brokers in a press release.

“The zoning designation for this particular site offers tremendous flexibility in realizing the maximum potential for many use groups, including community facilities like schools, libraries, museums, college dormitories, nursing homes, hospitals, health care facilities, as well as transient hotels, retail, and services to amusement and business establishments.”