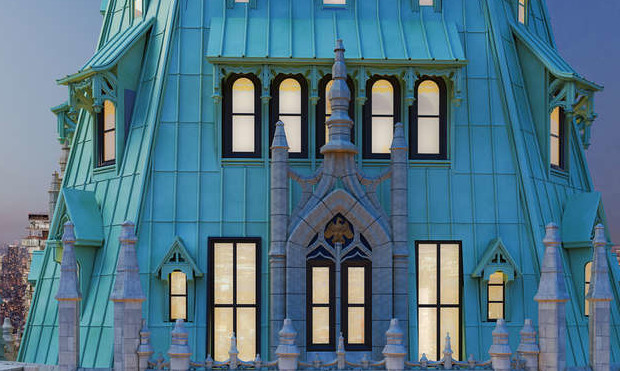 Before he worked for the world’s wealthiest entrepreneurs or represented the city’s most expensive listings, before he even closed on his first rental, Stan Ponte came to New York to be an actor.

So, perhaps it’s fitting that before he landed the role of big-time broker he had first to nail the audition.

In 1998, Ponte was as green as they grow ‘em in Dartmouth, Massachusetts. He’d studied acting and business at New York University, had a run of catering jobs and couple gigs hosting shows on satellite TV but real estate didn’t cross his mind until he saw the perks of the industry.

“A friend of mine all of a sudden started paying for dinner all the time,” Ponte recalled. “None of my friends had money for dinner … and the next thing you know we’re at nice restaurants and my friend is like ‘I’ll pay.’ I’m like, Okay, what’s going on? He said ‘I just got my real estate license.’”

Ponte promptly picked up a full course load at the New York Real Estate Institute and had a license of his own within two weeks.

His early days in the industry were a far cry from the type of white-glove work he does today as part of Sotheby’s two-man sales team that includes Joshua Judge at The Woolworth Tower Residences, a collection of luxurious apartments inside an ornate tower that once claimed the title of world’s tallest.

“I started renting apartments,” he said, “literally, studio apartments next to the boiler to NYU students.”

A chance encounter at a party in 1999 changed everything. Ponte, a broker for Benjamin James Real Estate at the time, met a woman who worked for the actor Ed Burns, who happened to be in the market for a new apartment. After a campaign that included numerous phone calls, flowers and a box of chocolates, Ponte convinced her to pencil him into Burns’ schedule for one hour of tours.

Jubilation quickly gave way to panic for Ponte, who was not about to walk the Saving Private Ryan star through his list of boiler room apartments in Greenwich Village wearing a cater-waiter suit. He was back on the phone, this time with high-end brokerages inquiring about listings for his new celebrity client, then with a car service. He bought himself an Armani suit and the stage was set.

Ponte and his chauffeur picked up Burns and then-girlfriend Heather Graham and took them to several apartments in Tribeca. His performance went over well enough to garner an encore. Then came a call from the assistant.

“She said he’s decided to buy an apartment through another broker,” he said. “I hadn’t rented any apartments for weeks because I was so focused on this, I had this expensive suit I didn’t need, I spent all that money on the car … I was devastated at not doing that deal.”

A few weeks later, though, Ponte got a call from Stribling & Associates. The firm’s founder, Elizabeth Stribling, wanted him to come in for an interview.Although she didn’t recall the Ed Burns affair when reached this week, Stribling said she could never forget her first impression of Ponte as “the most charismatic actor.”

“I am known in the industry for, if my nose twitches, I know someone is going to be a great broker and with Stan, I knew it right away,” she said. “He had enormous confidence, charisma, enthusiasm and it was clear he was really willing to get out there and work hard. We had an immediate connection.”

Ponte, Stribling said, has always had the ability to entertain clients with his persona as well as the occasional grand gestures. He once rented a suite in the Waldorf-Astoria and whipped together a last minute party that dazzled his guests.

“Stan is a showman, but at the same time he’s extremely genuine and real and that is a rare combination,” Stribling said. “Stan embraces whatever he takes on, he explores it in depth and he believes and I always say you cannot sell a property that you don’t believe in. Stan can see the best in everything.”

For the bulk of his 20-year career, Ponte has thrived on selling high-end homes to the world’s wealthiest, first for nearly a decade at Stribling then for the past several years at Sotheby’s. He took a two-year hiatus from sales to run Coldwell Banker Hunt Kennedy before the Great Recession shuttered it in 2009.

Whether it’s an $11 million full-floor residence at the Sherry Netherlands Hotel, a $41 million Upper East Side mansion or a $17.5 million condo on Gramercy Park, many of the properties Ponte has sold have historical significance that he relishes sharing with his clients.

“I do love telling stories, I love connecting the dots and I love looking for where the emotional connection is,” he said. “This is an emotional business. This is a home. It sometimes gets reduced to dollars per square foot and numbers and comparables and data — you can press a button and Zillow will give you a Zestimate and all those types of things — but it’s a home. You don’t live in your Apple stock, you’re living here.”

As a broker’s agent, Ponte has the opportunity to see the city’s wide and ever-expanding array of high-end offerings. That exposure, he said, has proved valuable in his most daunting challenge yet: selling the seven-floor, $110 million penthouse atop the Woolworth building.

Nicknamed “the Pinnacle,” the Alchemy Properties-owned apartment is being constructed within the copper crown of the Cass Gilbert-designed building. It will include a 400 s/f observatory on the top floor and it stands to be the most expensive residence ever sold in Downtown Manhattan.

“The experience of walking through it is unlike what I’ve experienced in any other apartment in the world,” Ponte said. “The first thing that went through my mind was ‘Wow, I’m standing where mankind stood at a point where they could never have been before, where people came from all over the world just to walk the observatory.’”

Ponte said working for Sotheby’s gives him an advantage in selling the Woolworth Tower Residences, which, aside from the penthouse, range from $4.5 million to more than $26 million, because so many prospective buyers within that price range have experience with the renowned auction house, be it to purchase art, jewelry, wine or another property.

In addition to his work, Ponte also prides himself on his community engagement, a trait he said he inherited from his parents. He admits, however, that his involvement today is quite different from his childhood in New England.

“Being involved in a small town means going to the pancake breakfast at the firehouse,” he said. “Being involved in New York City means putting on a tuxedo and raising money in a ballroom for young actors to be able to pursue their dreamsm.”

Last year, Ponte was named president of the Drama League, a national organization that supports performing arts. He also helped organize the volunteer group Broker’s Build with Habitat for Humanity NYC and he supports the Anti-Violence Project as well as several other charitable causes. He even serves on the board of directors for his condominium building.

“I just think it’s the responsible thing to do, participate in the community you live in, not just as a sales person, but as a citizen,” he said. “A citizen in the true sense of the word.”

IN PICTURES: CoreNet charges into 2018 with new board, big party