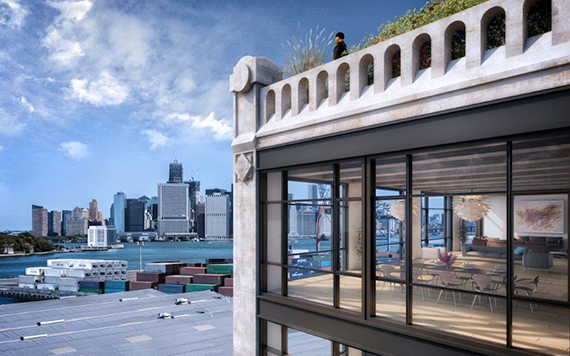 Red Hook has all the ingredients to be next hot neighborhood

The small Brooklyn neighborhood of Red Hook, which has a storied history of as a prominent shipping port that fell into a period of crime and poverty, has the potential to become a destination neighborhood.

Red Hook, surrounded by Carroll Gardens, Gowanus and Sunset Park is a small area on the waterfront that is most well-known today for the IKEA outlet that opened there in 2008 — there’s even an IKEA ferry that departs from Pier 11 seven days a week.

There’s also the Fairway grocery store that opened on Van Brunt Street in 2006, which offers one of the other advantages the neighborhood has over more crowded, popular areas of Brooklyn — abundant parking.

And for those who live in Red Hook, parking is important — public transit isn’t that convenient, and many residents must rely a bus to get to the closest subway station, the F/G at Smith Street, which was recently renovated after a two-year, $32 million facelift.

“There’s been quite a bit of change,” said Bernadette Ott, a Citi Habitats agent who has lived in Red Hook for nearly a decade.  “There are more stores, boutiquey-type places popping up, more restaurants and specialty item stores. When I first came here, there were maybe a handful, now there’s three times that.”

Much of that retail is located on the neighborhood’s main drag – Van Brunt Street – which has bars, pastry shops, and restaurants.
Restaurants like The Lobster Pound on Van Brunt and the food truck scene near Red Hook Recreation Center have been popular draws on the weekend for Brooklyn day-trippers.

The housing stock in Red Hook is limited, and mostly two and three-family buildings, according to Ott.  There have been a handful of new developments in the past decade, but most were small projects of less than 10 units.

Ott moved to the neighborhood looking for more space and affordability.  “I lived in Park Slope before, and I loved the neighborhood but the apartment was small and getting very crowded,” she said. “We moved to Red hook and got a lot more for our money.”

The “old-school New York” vibe was part of the draw for Ott as well.

“It’s not a neighborhood for everyone,” she said. “It’s really a great neighborhood. If you’re attracted to it and like the feel of it and how it is now, I think people will really like living here.

“If you’re coming here because you think it’s going to be something in the future, you won’t stick around. Everything isn’t as easy as other neighborhoods.”

Ott said that sales this year – residential and commercial – in Red Hook, are on pace to be a little bit higher than the last couple of years.

Recently, developer Est4te Four launched a new project at 160 Imlay Street, which will be a mix of artists’ studios, commercial space and 70 condo units. The developers are also planning on incorporating a water taxi station and bike share program for the community along with the project.

A similar project by the same developers is also underway at 202 Coffey Street, which will consist of artist studios with a gallery.  That building has served as a popular location for movies and TV shows in the past year, most notably Boardwalk Empire.

Near IKEA, a new charter school is under construction, PAVE, which has an admission by lottery and has so far gotten good reviews.

“I was just looking for the cheapest rents, that’s why I came here. But I really like the neighborhood,” said Metzler during a recent visit to the showrooms.

He was surprised to find that he has had many curious walk-ins to the still-underway showroom.

One critical hurdle in the gentrification of the area is zoning. With many dilapidated warehouses and industrial buildings abandoned, the area is ripe with land for development, but the current zoning doesn’t support it.

“People who could move here are people with money who could afford to buy two and three-family homes and have some flexibility in their work schedule,” said Ott.

“A lot of people who live here have flexibility – they’re freelancers or have different work hours – and they aren’t so dependent on public transit.”

With retail, a new school, and new housing coming online, the neighborhood has many of the key ingredients to become the next hip place, even with the dearth of public transit.

HAVE YOU HEARD … Ryan Serhant is selling 230 E63rd units;