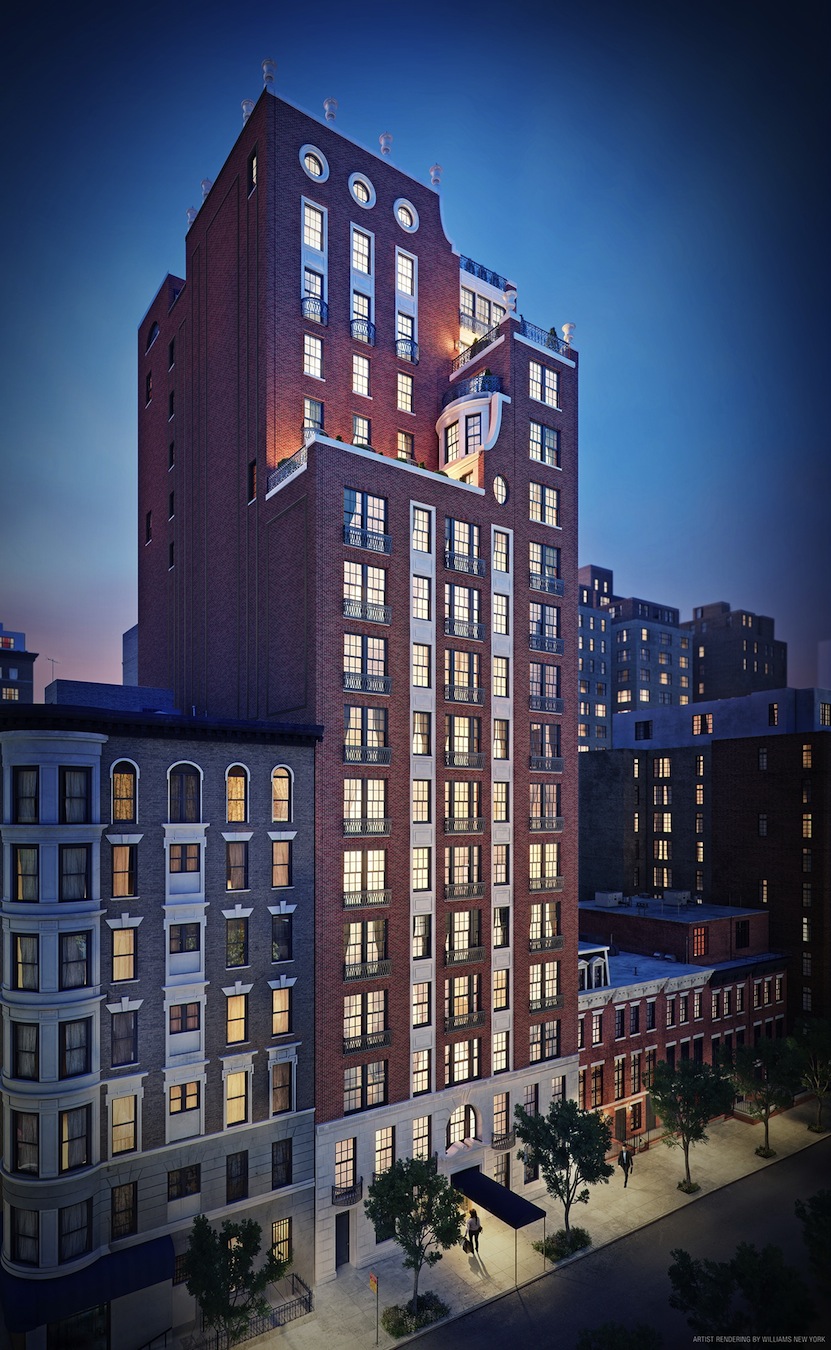 After launching sales roughly a month ago, developer Spruce Capital Partners is announcing 151 East 78th Street has 11 contracts signed, representing approximately 78 percent of the 14-unit building and over $114 million in sales.
The residences in contract range in price from $10,000,000 to $12,750,000. All of the buyers are New Yorkers who intend to make the building their primary residence.
Stribling Marketing Associates is the exclusive marketing and sales agent and Alexa Lambert and Cathy Taub are the co-heads of sales.
Amonth the units in contract is the building’s maisonette, a five-bedroom, 6-bath duplex with a rpivate garden listed at $12,750,000.
Three penthouses are still available, the largest of which is the $29.5 million Penthouse A.
It is 6,975 s/f and occupies the 15th and 16th floors. It has five bedrooms, 7.5 bathrooms a 1,690 s/f private roof terrace and a 268 s/f balcony off the gallery on the 15th floor
The property was designed by Peter Pennoyer, an Architectural Digest top 100 architects. Investor Alex Rovt is a partner in the project. Closings are estimated to begin December 2015.

JDS Development Group and Property Markets Group, in partnership with Starwood Capital Group, announced that the newest Ralph Walker condominium conversion Stella Tower, which officially launched sales last month, is already more than 60 percent sold.
Located at 425 West 50th Street, the 18-story condo conversion has signed contracts for 31 of its 51 residences, with an average price per square foot of $2,000. Some of the apartments are under contract for more than $3,000 psf.
“Prices like this were previously unheard of in this neighborhood, which continues to transform and attract smart, creative buyers,ˮ said Michael Stern, managing director of JDS Development Group.
One- to three-bedroom homes are currently priced from $1.8 to $6.2 million. The penthouses are expected to command between $10 and $14 million.

Douglas Elliman Development Marketing is handling the marketing and leasing for the project, which was transformed by L +M Development from a vacant lot into a state-of-the-art building.
Designed by architecture firm SLCE, and Cetra Ruddy, each residence has high ceilings, wide-plank oak flooring, double-pane oversized windows, custom window treatments, and individually controlled heating and cooling.
David Dishy, president of development and acquisition at L+M Development, said, “The Pearson Court Square will offer an incredible slate of top-quality amenities and bright, well-appointed apartments that we hope will provide residents a warm and inviting place to call home.”
The building is pending LEED certification and L+M, a leader in sustainable development, has installed three rooftop wind turbines to assist with a portion of the building’s energy generation.
Residences are available for immediate occupancy, with studios from $2,060, one-bedrooms from $2,740 and two-bedrooms from $3,500.

Fortis Property Group and Wonder Works Construction Corp. announced that 540West, a new condominium in Hell’s Kitchen is now over 50 percent sold.
Located at 540 West 49th Street between 10th and 11th Avenues, 540West is bringing 110 residences to market, with move-ins expected by the end of the year.

The property is comprised of two interconnected seven-story buildings — a North and South Tower — designed by S9, an affiliate of Perkins Eastman Architects PC.
Residences include studios, one- and two-bedroom apartments, duplex units and a collection of penthouses with private roof decks. They are priced between $725,000 and $3.575 million.
“There is no doubt that Hell’s Kitchen is undergoing an exciting transformation,” said Stephen McArdle, senior managing director of Halstead Property Development Marketing, 540West’s exclusive sales and marketing team.
“Reaching this sales milestone demonstrates that savvy buyers who choose to live and invest in New York City not only see the potential of this particular neighborhood, but also want to be at the forefront of its revitalization. It doesn’t hurt that this project hits on all cylinders.”
Meshberg Group, LLC designed the 540West interiors.

Bluejay Management announced leasing will launch in early July for 341EPW a new eight-story, 63-unit rental at 341 Eastern Parkway in Crown Heights, Brooklyn.
aptsandlofts.com has been retained as the exclusive leasing and marketing agent for the building, situated at the corner of Eastern Parkway and Franklin Avenue.
Marc Jacobowitz of Bluejay Management, said, “Our goal behind 341EPW was to focus on returning the sense of grandeur on this thoroughfare with classic architecture that offers a nod to the timeless limestone and brick facades along Eastern Parkway, but with a modern interior design.”

Designed by the Meshberg Group, 341EPW includes a mix of studio, one- and two-bedroom homes; select units include a private terrace.
Pricing begins at $2,200 for a studio, $2,700 for a one-bedroom and $3,400 for a two-bedroom apartment. Additionally, penthouse duplexes begin at $3,800.
Amenities include a lobby lounge, fitness center and a landscaped roof deck. There is a part-time doorman, super and parking.

HAVE YOU HEARD … Ryan Serhant is selling 230 E63rd units;

Voda has his eye on the goal