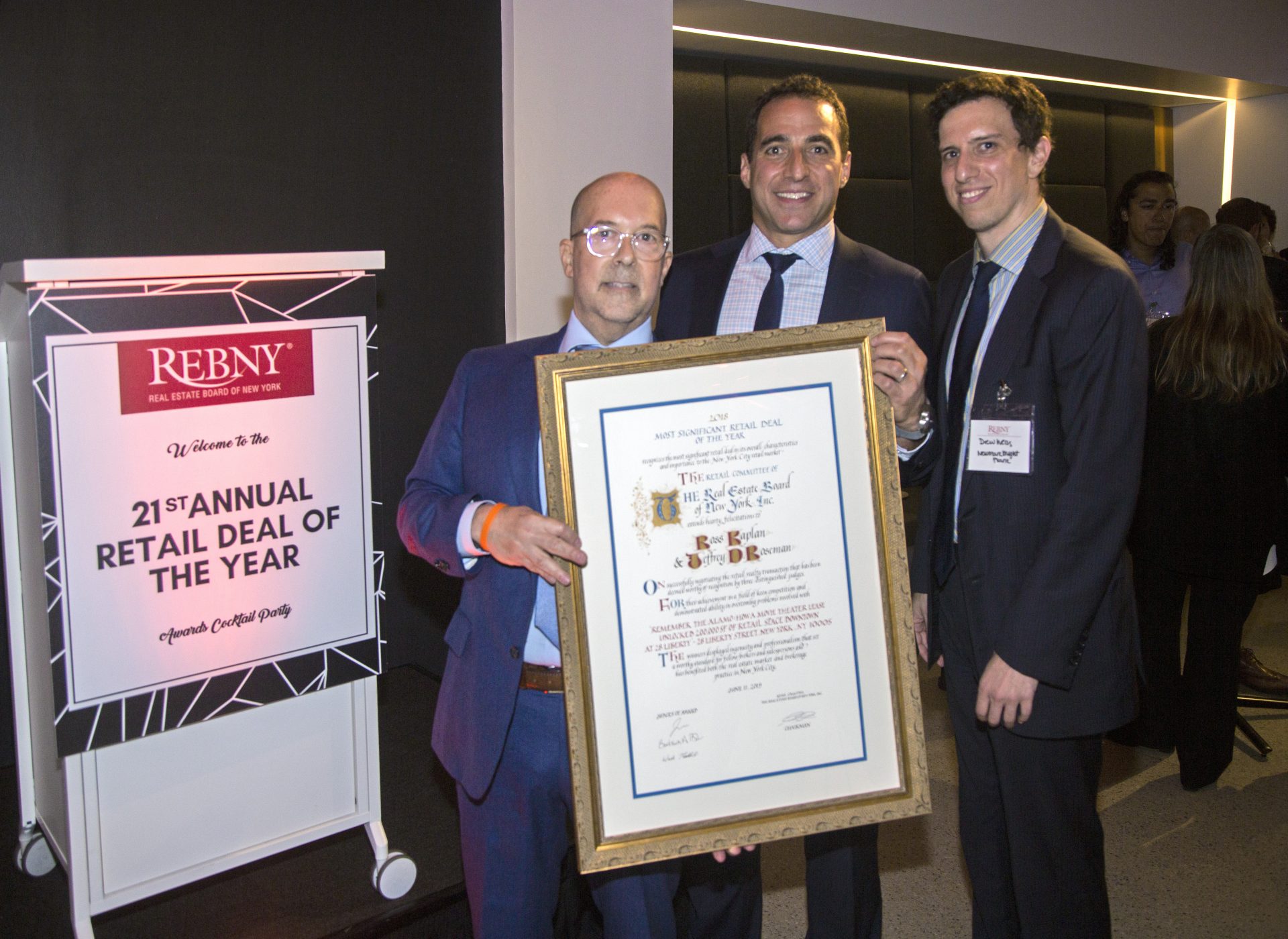 Recognized as the most meaningful transaction in its overall characteristics and importance to the New York City retail market, “Remember the Alamo: How a Movie Theater Lease Unlocked 200,000 SF of Retail Space Downtown at 28 Liberty” at Fosun’s 28 Liberty Street, transacted by Ross Kaplan and Jeffrey D. Roseman of Newmark Knight Frank, was honored as The Most Significant Retail Deal of the Year. The pair are pictured top with NKF’s Weiss.

This is Jeffrey Roseman’s fifth time winning a REBNY Retail Deal of the Year Award and Ross Kaplan’s first.

Demonstrating exceptional ingenuity and creativity, The Most Ingenious Retail Deal of the Year title was awarded to: “Deal of a Life Time: One Wall Street” at 1 Wall Street.

“The work of this year’s Retail Deal of the Year award winners demonstrates the importance of innovative brick-and-mortar spaces in our constantly evolving retail market,” said REBNY President John H. Banks. “The award winners have demonstrated effective navigation of opportunities in the retail sector while positively contributing to the life and growth of New York businesses.”

“Among the many noteworthy retail transactions closed by REBNY brokers this year, the deals highlighted this evening stand out for their remarkable vision,” said REBNY Retail Committee Co-Chair Steven A. Soutendijk. “We congratulate the award winners for their achievements and their commitment to excellence, which are significant for both our industry, and for New York.”

ABOUT THE RETAIL DEAL OF THE YEAR AWARD RECIPIENTS

The Most Significant Retail Deal of the Year

The Most Ingenious Retail Deal of the Year

In this deal brokered by RKF’s Peter Whitenack, Jackie Totolo and Scott Zinovoy and The Dartmouth Company’s Joe Mastromonaco and Fritz Kemerling, Life Time Fitness signed a 74,000 square-foot lease at Macklowe Properties’ 1 Wall Street. This will be the luxury athletic center’s second Manhattan location, and will span four floors of the 1 Wall Street building.

> View the full list of submitted transactions for REBNY’s Retail Deal of the Year Awards competition.