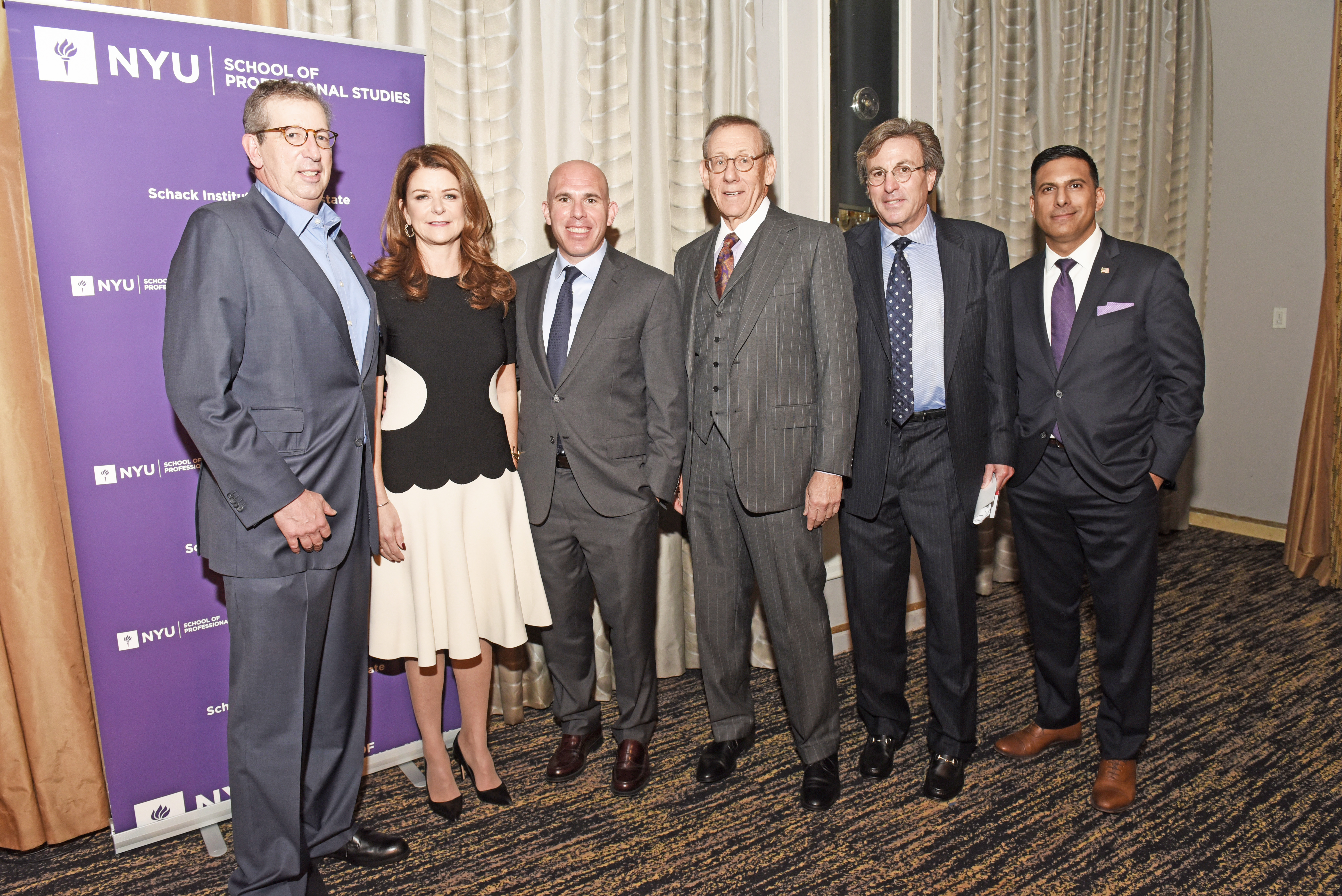 Stephen Ross would, perhaps, have the most to gain if Amazon chose New York for its next headquarters.

After the e-commerce juggernaut issued a request for proposals from interested municipalities, the city floated four potential landing spots. The first location, with the biggest pool of potential employees and the most available office space, was Midtown West and Hudson Yards, the new live-work-play neighborhood being constructed by Ross’s Related Companies on the Far West Side, was the crown jewel.

“I don’t think New York has a chance of winning,” Ross said during an all-star panel hosted by the NYU Schack Institute last week.

During the conversation, which began with tax policy and wrapped up with the growing specter of terrorism, Ross argued that New York had done enough to distinguish itself from other big cities hoping to attract Amazon, particularly the likes of Newark, which offered $8 billion in tax abatement.
New York left tax rebates out of its proposals, hoping to avoid an outright bidding exchange with other competitors, but state officials said it would be willing to negotiate privately.

The panel was split on the city’s prospects of landing Amazon.

Gilmartin agreed that the economics of the situation make a New York headquarters for Amazon “difficult to imagine.”

She acknowledged the potential for her company’s portfolio — which includes the MetroTech center in downtown Brooklyn as well as several properties in the Pacific Park area around the Barclays Center — Gilmartin said the arrival of a major employer such as Amazon would benefit the entire city.

Rudin, on the other hand, said he was confident in New York’s ability to win over Amazon, comparing the collective efforts of business, government and educational institutions in the city’s bid to the efforts that went into the successful campaign for Super Bowl XLVIII and the less successful 2012 Olympics bid.

“There is obviously a cost factor, but when you weigh that against the talent pool, the educational institutions that are involved in this … there’s an infrastructure already in place here to provide the workforce for Amazon and all the other companies that want to come here,” he said. “And that’s our strength, that’s going to overcome some of our cost differentiations.”

Rechler, who has worked with Gov. Andrew Cuomo, previously as a commissioner of the Port Authority and now as a board member of the Metropolitan Transit Authority, said the state is ready to roll up its sleeves in the Amazon fight.

“The state’s been clear, it’s not going to put out offers for unknown choices,” he said. “If Amazon comes back and says ‘I want one or two of these sites in New York,’ trust me, the state is going to put a very, very robust package out.”

Rechler said the Amazon race embodies a greater challenge for the city: appealing to the best minds the world has to offer. “It’s a war for talent,” he said.

Like Rudin, Rechler said the city’s biggest selling point is its workforce. He also acknowledged that many of today’s market trends — the flood of premium rental housing; reimagined office layouts; retail innovations and new amenity offerings — cater to the wants of the world’s top university graduates.

More than the cost of doing business, the panelists counted the cost of living among the greatest hurdles to attracting major employers. Exacerbating that concern is the proposed elimination of the State and Local Tax, or SALT, deduction from the federal tax code, a move called for by Republicans in the U.S. House of Representatives.

“It has serious implications for this city and for young, urban professionals who want to live here and raise families here, so I am very concerned,” Gilmartin said. “I think this has the ability to really have a pretty seismic impact on the near-term prosperity of New York.”

The issue was such a concern that Gov. Cuomo, who was scheduled to give a keynote address at the event, had to cancel at the last minute to instead attempt to dissuade New York representatives from supporting the bill. Despite his efforts, the House passed the $1.5 trillion tax cut that afternoon.

Rudin said the tax reform package, as it stands, would both help and hurt real estate in New York if it became law. While caps on tax rebates would hurt homeowners throughout the Metropolitan region, lower tax rates on real estate investors and holders will benefit the industry.

“[The tax bill] is a very serious issue for us as well as other high-tax states, but as we’ve talked about before over the last 20 years, we’ll figure out a way to deal with that,” he said. “The state and the city will have to be more efficient and lower taxes and perhaps do things in a more efficient way to attract and retain people to come to our city.”

Ross said he doesn’t believe the elimination of the SALT deduction does not pose as much of a threat to New York as it did the last time it was discussed in 1986 when Connecticut had no state income tax and New Jersey had only a modest one. With a more level playing field in the region, Ross said the state has less at stake.

“Everybody says, ‘well, I wanna move to Florida,’ but if you think about it, the jobs aren’t there and I don’t think there are enough industries that can move to Florida,” he said. “So, I think that while it will have an impact, I don’t think it’ll be quite as great as we thought it might be in ’86.

“I’m not so sure this tax bill is going to get passed,” Ross added, contributing to the panel’s broadly held skepticism of the Republican-controlled Congress and White House.

However, as the GOP tax plan picks up steam, Rechler said the biggest threat it poses to Greater New York is the elimination of money that was promised to pay for crucial infrastructural improvements, with those funds being redirected to offset the deep cuts to personal income and corporate taxes.

“One of the most critical things we need to do is reinvest in our 20th-century infrastructure so we can stay competitive for the 21st century,” he said. “A lot of that, we’re able to do without the federal government ,but the major projects, like the tunnel under the Hudson River, cannot be done without the federal government. So while this tax bill is happening, it might ultimately be putting a tax on our children to take care of that in the future.”

When asked what other issues keep them up at night, both Gilmartin and Rechler spoke about mass shootings and other acts of terror that seem to be ever more prevalent in the U.S. and around the world.

“It has nothing to do with real estate, nothing to do with business, it has to do with being a resident of a sanctuary city, being a woman and being a mother,” Gilmartin said of her biggest fear. “Thinking about the political environment and the need for us to remember the rule of law and things that are so basic and so fundamental that have come under challenge if not threat in the recent year.

“It’s disturbing, hopefully not destabilizing, but it does keep me up at night,” she said.

Ross said his concerns center on paradigm-shifting technology, such as autonomous cars, and how prepared his and other companies are to embrace it.

“Change is accelerating at a pace that we’ve never seen before and impacts are so much greater,” he said. “As you look out and see the impact of artificial intelligence and technology and where that’s leading us and we talk about changes and we need certain things repaired, like the subways. What’s that going to be in the long term?