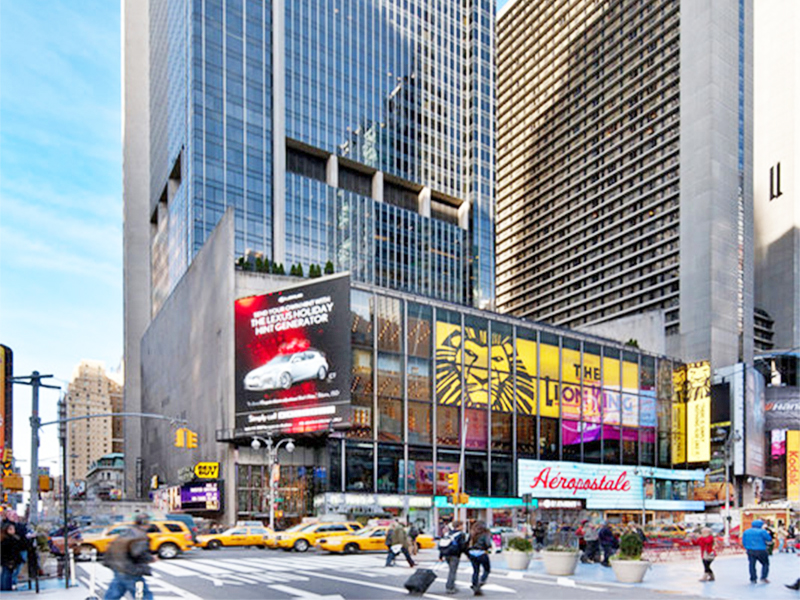 SL Green is closing out Thanksgiving Week with $1 billion is sales.

The company has entered into a contract to sell a 43 percent interest in 1515 Broadway to affiliates of Allianz Real Estate, the real estate investment and asset manager within the Allianz Group.

And the cityʼs largest commercial property owner is selling 600 Lexington Avenue outright for $305 million, or $1,005 per square foot.

The deals are being viewed as a sign of the continued strength of the New York office market where capital values continue to witness appreciation, jumping 11 percent year-on-year to $1,213 psf, according to Colliers International 3Q report.
The 1515 Broadway deal values the 1.86 million-square-foot, Class-A Times Square office building at $1.950 billion, or $1,045 per square foot.

Approximately 70 percent of the transaction is expected to close on November 30, 2017. The balance is scheduled to close in the first quarter of 2018 when SL Green said it will realize cash proceeds of approximately $416 million.
The companyʼs co-chief investment officer, Isaac Zion, said, “1515 Broadway has been an extraordinary investment for SL Green and we are delighted to collaborate with our new joint venture partner, Allianz, in one of New York City’s truly special buildings.

“We look forward to a long-term, mutually beneficial relationship with Allianz on 1515 Broadway and to future investment opportunities together.”

SL Green purchased 1515 Broadway as part of a joint venture in 2002 and acquired full control of the building in 2011. In 2012, following a major redevelopment of the property that included the re-positioning of all retail space, a new lobby, elevators and state-of-the-art signage, Viacom signed a long-term lease renewal and will occupy the building’s office space through 2031.

The 57-story building is currently 98 percent leased and is home to retail tenants Skechers, Swatch, Oakley, Kiko Milano, and Line Friends along with the Minskoff Theater, one of the city’s largest live performance theaters and host to The Lion King – the highest grossing show on Broadway.

According to Zion, “The sale of 600 Lexington represents the culmination of a strategic approach that started with a distinct business plan to make targeted capital improvements in order to increase occupancy and improve the rent profile of the building, and now ends with the opportunity to redeploy the net proceeds we’ve generated into other investment prospects.

“This transaction not only completes an exceptional investment for us, it further demonstrates continued investor demand for East Midtown assets.”