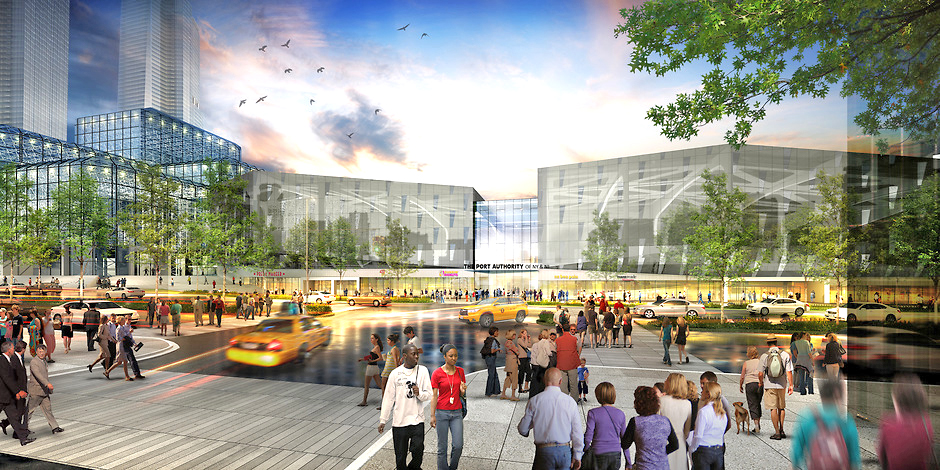 The Port Authority is considering a trio of options to rebuild its 42nd Street bus terminal.

One plan calls for rebuilding the 70-year-old terminal on site; a second would involve selling the building and redeveloping a new facility underneath the Javits Center, while the third option would create an intercity bus terminal at the Javits Center and renovating the existing Port Authority site for commuter use.

The plans have been issued as part of a formal review that will include a 120-day public outreach process.

“Today’s kickoff of the formal public outreach process for the new bus terminal is a critical milestone for what will be one of the largest and most important transit infrastructure projects in the country,” said Port Authority Chairman Kevin O’Toole.

“We are strongly committed to replacing this legacy, over-capacity facility, and look forward to a spirited dialogue with all stakeholders on how the project will proceed.”

“We are committed to building the replacement Bus Terminal and to do so in full consultation with the community, with elected officials in both New York and New Jersey, and with all stakeholders,” said Port Authority Executive Director Rick Cotton.

“We welcome the start of this public engagement and look forward to receiving input and comment on the alternatives and on the scope of potential environmental impacts to be analyzed in the environmental review process.”

In 2017, the Port Authority Board of Commissioners authorized the agency to hire environmental and technical consultants to provide project management and planning services for the bus terminal replacement.

The existing Port Authority Bus Terminal was built in 1950 and expanded in 1981. The terminal now serves an estimated 260,000 passenger trips on weekdays, or 23 percent of trans-Hudson trips entering or exiting Manhattan’s central business district, and 8,000 bus movements.

While the process to build a new bus terminal is continuing, the Port Authority has undertaken an aggressive $110 million Quality of Commute program to enhance the customer experience at the existing facility.

The initiatives include new and enhanced retail, new bathrooms, new doors at the terminal’s 8th Avenue entrance, new lighting and ceiling and improved elevators and escalators.

The Port Authority also has partnered with bus operators on operational changes that have reduced crowding within the terminal and relieved congestion caused by buses on nearby streets.

In the coming weeks, a new family restroom and new staircase from the bus terminal’s main floor to the subway mezzanine will open to enhance pedestrian flow, while the installation of a new ceiling is in progress throughout the facility.

The RPA proposed moving intercity bus facility into the basement of Javits in August 2017, when it released its own Crossing the Hudson report.

“We found that an intercity bus facility under Javits would reduce usage of the PABT, leaving space for rehabilitation as well as swing space to better maintain operations during reconstruction of the existing terminal,” said Wright.

“In the long run, the dual bus terminals would provide redundancy and could allow the region to move toward a broader regional transportation vision.

“We need to get this redesign right not only for neighboring communities but for the overall regional economy. We look forward to staying fully engaged as the EIS process proceeds, and expect a robust public dialogue.”

Rendering top is an early drawing from Perkins Eastman.

Work starts on veterans housing development in the Bronx