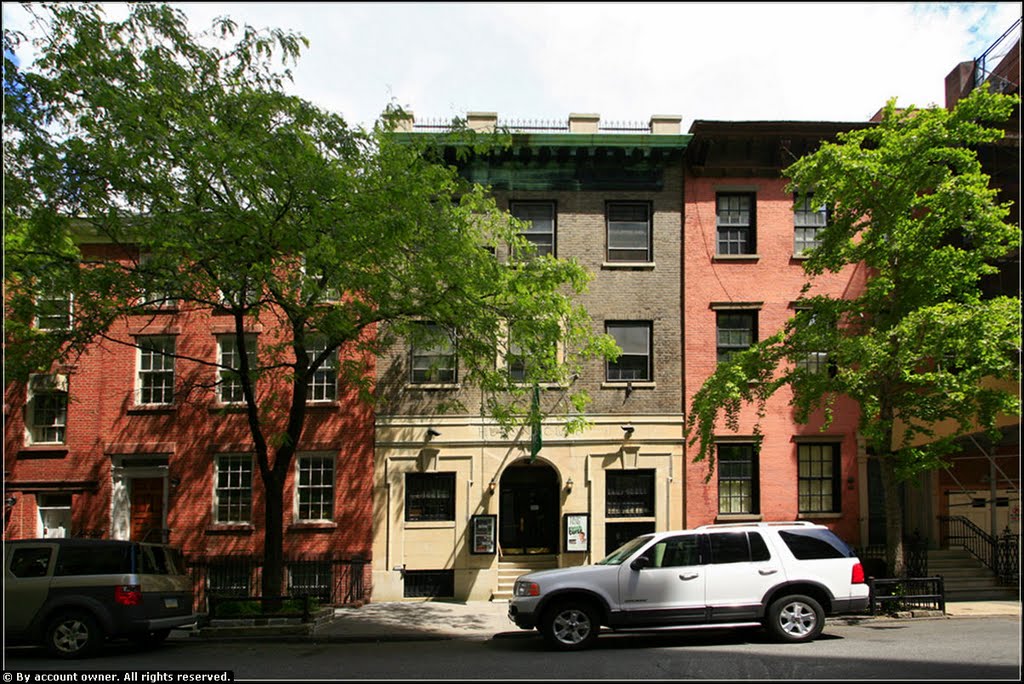 • The sale of 15 Vandam Street, a mixed-use property built in the 1820s that was a Tammany Hall meeting house called the Huron Club; Prohibition-era speakeasy; 1960s theater; and today the SoHo Playhouse. The asking price is $9.6 million for the 8,000 s/f 25-foot wide building. Ron Solarz, Executive Managing Director and Principal is marketing the property, which offers three floors above grade and a lower level on the north side of Vandam Street between Sixth Avenue and Varick Street in Hudson Square in the Charlton-King-Vandam Historic District. Gary Meese, Senior Director, Financial Services, is the analyst for the offering. Located 130 feet from the corner of Sixth Avenue, 15 Vandam Street is currently configured as a mixed-use building comprised of the 178-seat SoHo Playhouse on the first floor and a cellar featuring a 55-seat cabaret and bar. The second floor includes a full-floor, loft-style two-bedroom apartment, and the third floor includes a one-bedroom apartment with a 1,377 s/f rear deck and a 878 s/f deck on the roof.

• Adelaide Polsinelli, Senior Managing Director and Principal at Eastern Consolidated, has been named the exclusive broker to sell a commercial condo totaling 3,732 s/f at the base of 68 Thomas Street, a five-story boutique residential condominium located between West Broadway and Church Street in Tribeca. The asking price is $3,695,000. With 25-feet of frontage on Thomas Street, it has been used as a gallery in the past but will be delivered vacant. The commercial space offers 1,883 s/f on the ground floor and 1,849 s/f in the sub-cellar. The four upper floors consist of luxury loft apartments.

Cushman & Wakefield announced that the firm has arranged the sale of 751 Myrtle Avenue, a warehouse site in Brooklyn. The final closing price was $6.5 million, equating to approximately $433 per existing s/f and a 3.5 percent capitalization rate on existing income. A team consisting of DJ Johnston, Bryan Kirk, William Cheng, Joshua Sabzevari, and George Bukawyn represented the seller in the transaction. The single-story warehouse consists of three commercial units and totals 15,775 s/f. The space is currently leased to a tile business and auto repair shop. The building is located on the northwest corner of Myrtle Avenue and Nostrand Avenue, close to Atlantic Yards and the Pratt Institute.

Friedman-Roth Realty Services announced the sale of a Bronx apartment building located at 348 Brook Avenue. The building, located in the Mott Haven section of the Bronx, is a four-story walk-up with 7 residential units and one retail space occupied by a pizzeria. The building has 25 ft. of frontage and encompasses a total of 6,630 s/f. This is the first sale of the property in nearly 30 years. The purchase price was $1,425,000. Friedman-Roth’s Heshy Kraus represented both the buyer and the seller in this transaction.

Gebroe-Hammer Associates represented the seller, Ramapo Knolls Inc., and procured the buyer, Suburban Manor LLC, in the $6.35 million sale of Suburban Manor, a garden-style apartment complex located at 214 – 226 Old Nyack Turnpike in the Town of Ramapo, NJ. The brokerage team of Managing Director David Oropeza and Senior Vice President Debbie Pomerantz arranged the transaction, which includes a four-acre development site. Comprised of 53 units, Suburban Manor has a mix of studio and one- and two-bedroom layouts. The four-building complex is situated close to schools, shopping and transportation links within the well-established bedroom community 30 miles from New York City.

The Hampshire Companies announced the sale of the 88,265 s/f Towne Square Shopping Center at 860-892 Union Mill Road in Mt. Laurel, N.J. to The Westover Companies. The multi-tenant property is currently anchored by ShopRite. The shopping center sits on 13.03 acres in one of the most affluent suburbs in New Jersey at the gateway to a 55-plus community called Holiday Village East, which consists of more than 950 residential homes, and three residential subdivisions boasting an additional 2,400 units. Built in 1996, The Hampshire Companies acquired the Towne Square Shopping Center in 2012. The center is 94 percent leased and includes an adjacent free-standing pad with a 5,000 s/fvacant retail building. Brad Nathanson, Executive Vice President, Investment Properties at CBRE, represented The Hampshire Companies in the transaction.

Houlihan & O’Malley Real Estate Services announced the sale of 266 East Gun Hill Road, Bronx, NY, for $2,500,000. The building is 7,300 s/f of first floor retail space. There are six tenants in the building. The lot is 8,080 s/f. Dan and Gerry Houlihan represented the seller and John Joseph Rivera, of Kassin Sabbagh Realty, represented the buyer. James Manning was the attorney for the seller and Chris Marengo was the attorney for the buyer.