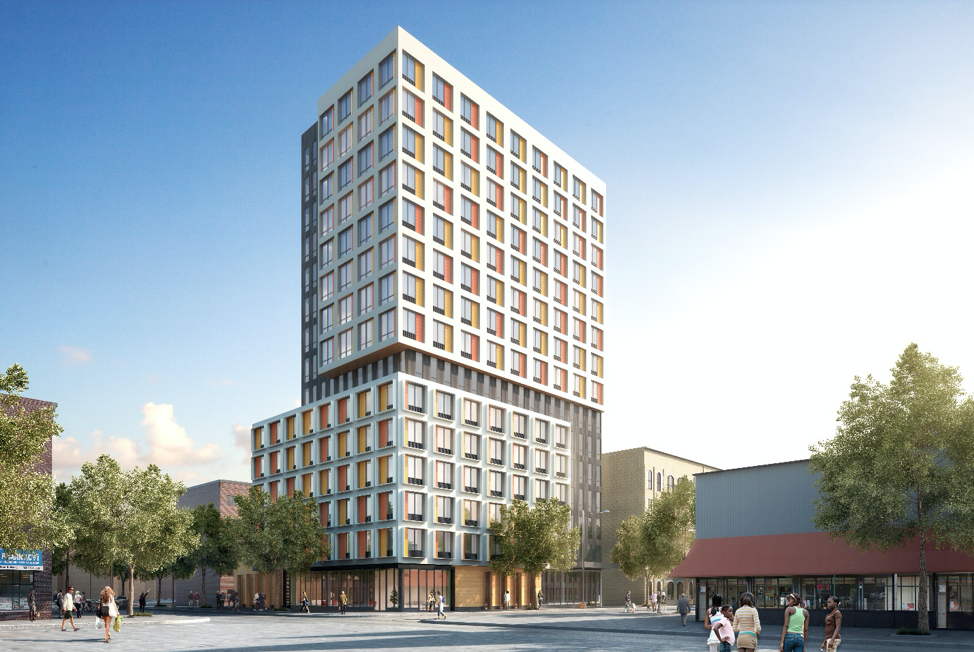 The New York City Housing Authority (NYCHA) and the New York City Department of Housing Preservation and Development (HPD) have finalized a $60 million deal that will bring 101 new affordable apartments to Mott Haven in the Bronx.

The Betances Family Apartments will be built on a formerly vacant retail building on the corner of Willis and 146th Street that was demolished last year at NYCHA’s Betances VI campus. Construction will start next month on the 101-unit development which will include 70 units for extremely low- and low-income households, 30 units for formerly homeless households, and one superintendent’s unit.

The 15-story building, known as Betances Family Apartments, will be located on the corner of East 146th Street and Willis Avenue on NYCHA’s Betances VI campus.

The development is part of NextGeneration NYCHA designed to bring new, mixed-income developments to the Authority’s “underutilized” land. Part of Mayor Bill de Blasio’s far-reaching housing plan, the aim is to achieve short-term financial stability and diversify funding for the cash-strapped city housing group and part of the Authority’s commitment to contribute 10,000 new affordable units for the city’s residents.

“Betances Family Apartments continues the successful partnership between NYCHA and HPD’s 100 percent Affordable program and is another example of what is possible when the City and its partners work together to support the vitality of neighborhoods like Mott Haven,” said Deputy Mayor for Housing and Economic Development Vicki Been.

“NYCHA is continually focused on leveraging all ways we can support the Authority’s mission of increasing opportunities for low- and moderate-income New Yorkers to gain access to safe and accessible housing,” said NYCHA Chair & CEO Greg Russ. “We are excited to continue the legacy of fostering affordable housing options in the South Bronx, and look forward to engaging with our partners and stakeholders on this dynamic project.”

The project follows a rezoning that was finalized in 2019. Building amenities at Betances Family Apartments will include a children’s playroom, bike storage, an outdoor green roof terrace, and 24/7 building security. The ground floor at Betances Family Apartments will feature approximately 10,000 s/f of commercial space designed to enhance the availability of quality retail spaces in The Hub, the busiest commercial district in the Bronx.

The Bridge will provide a range of on-site supportive services, including case management, benefits counseling, and linkages to community mental health, dental, and substance abuse services. These services will be available to all households residing at the Betances Family Apartments.

Current NYCHA residents will be given preference for 18 of the apartments and will have the opportunity to apply for the apartments through HPD’s Housing Connect lottery system.

NYCHA continues to own the land and buildings, administer the Section 8 subsidy and waitlist, and monitor conditions at the development. All units in the development must remain permanently affordable (rent cannot exceed 30 percent of resident income).

NYCHA will retain rights to the land developed through a long-term ground lease and provide oversight to the project. Developers will be required to train and hire NYCHA residents, and proactively engage residents on a regular basis as the project moves forward. Rents will be stabilized in the completed properties.

Betances Houses were named in honor of 19th century physician and revolutionary Dr. Ramón Emeterio Betances (1827-1898). Often called “the Abraham Lincoln of Puerto Rico” for his efforts to free the slaves, Betances was the son of a wealthy landowner who received his medical degree from the University of Paris. He founded a hospital in Mayaguez where he treated victims of a cholera epidemic. In 1867 he organized an abortive insurrection against the Spanish colonial government. Betances was awarded the Legion of Honor by the French government for his contribution to literature.

The vacant lot on East 142nd Street by Betances V is believed to have once been occupied by part of the residence and sculpture studio of the Piccirilli family, a father and six sons who were renowned marble carvers and sculptors whose works included the statue of Abraham Lincoln in the Lincoln Memorial in Washington, D.C., ‘Patience’ and ‘Fortitude’ –  the two lions in front of the New York Public Library on Fifth Avenue in Manhattan, as well as numerous other statues around New York City and the nation. This block is co-named Piccirilli Place.