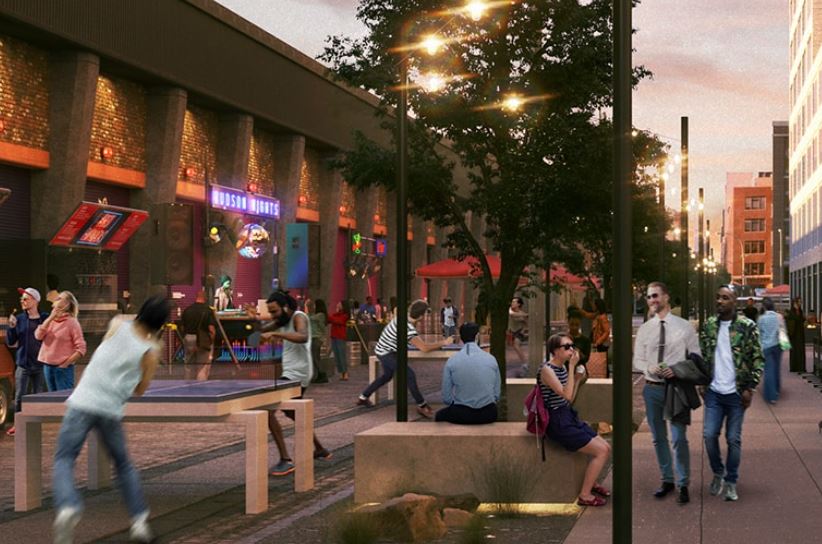 “This plan builds on our work and vision for the neighborhood and incorporates lessons we’ve learned from the pandemic about open space, mobility and community,” said Ellen Baer, President and CEO of Hudson Square BID. “Our goal is to provide a great experience for those who work, shop, play, and live here. The plan ensures that the innovation that thrives in the workplaces in  Hudson Square is reflected in the public realm, creating a true 21st century neighborhood, inside and out,”

The goals of the plan are to:

The plan is organized around three big ideas that form a long-term vision, as well as steps the BID plans to take to facilitate near-term improvements.

Greenwich St. Gateway will feature a gateway sculpture and enhanced pedestrian space to knit together Greenwich Street from Hudson Square to Tribeca, mitigating the barrier created by Canal Street.  Greenwich Street will be reconfigured to improve experiences for pedestrians, shoppers, bikers, retail, and commercial businesses. The corridor will be further enlivened with public art and programming that accounts for the multiple commercial, industrial and residential uses that coexist along this stretch of Greenwich.

Houston St. Mobility Corridor will create an east-west corridor along Houston Street, utilizing a sidewalk-level bike lane that will mark Houston Street as a major connector extending from the East River Park to Hudson River Park. Buildings will serve as canvases for art that captures the movement of pedestrians, cyclists and cars.

Walk to the Water will improve access to Hudson River Park, in the long term, connecting this amenity with Hudson Square and points east  via a pedestrian bridge from Spring Street over the West Side Highway. In the short term, the plan outlines a more inviting transition to the park from Washington Street, complete with artistic wayfinding, greening, and lighting.

To develop the plan, the BID engaged a team led by WXY, a planning, urban design and architecture firm.  The estimated capital cost  of approximately $22M, (not including the cost of the bridge, to be funded separately) will be funded through a public-private-partnership, as funds become available.  All operating costs will be funded by the BID.

“Hudson Square is at the vanguard of how to make streets work better for everyone,” says WXY founding principal Claire Weisz, FAIA. “With the focus on enjoyable connections for walking and cycling between subways, and north and south along the Hudson River, this plan is a timely blueprint for how to connect, activate, and innovate on New York City’s sidewalks, curbs and streets.”

Hudson Square BID was founded in 2009 as the only BID in the City with a primary focus on streetscape, traffic management and activation of ground floor uses. At the time, the neighborhood was known as a place for cars entering and exiting the Holland Tunnel, commercial vacancy rates were high, and there was little pedestrian traffic. Green, open spaces were virtually nonexistent, as were ground-floor commercial businesses.

The BID’s first streetscape improvement plan, unveiled in 2012, set in motion the neighborhood’s transformation from a place for cars to a place for people. The plan, much like the current one, focused on creating spaces for people to connect, building a healthy environment, and ensuring workers, residents and businesses could co-exist successfully amid the area’s regional transportation facilities.

In the time since, daytime pedestrian counts have increased from 30,000 to 70,000 (2009 vs. 2019), commercial vacancies went from 7.3% to 2.6% (2009 vs. 2020), 350 trees were planted, the BID created a walkable public art gallery, new open spaces and there are now nearly five million square feet of office and residential space under development.  Fifty percent of the first plan’s $27 million capital costs were funded by the BID, with the remaining 50 percent funded by NYC.  All operating costs are funded by the BID.