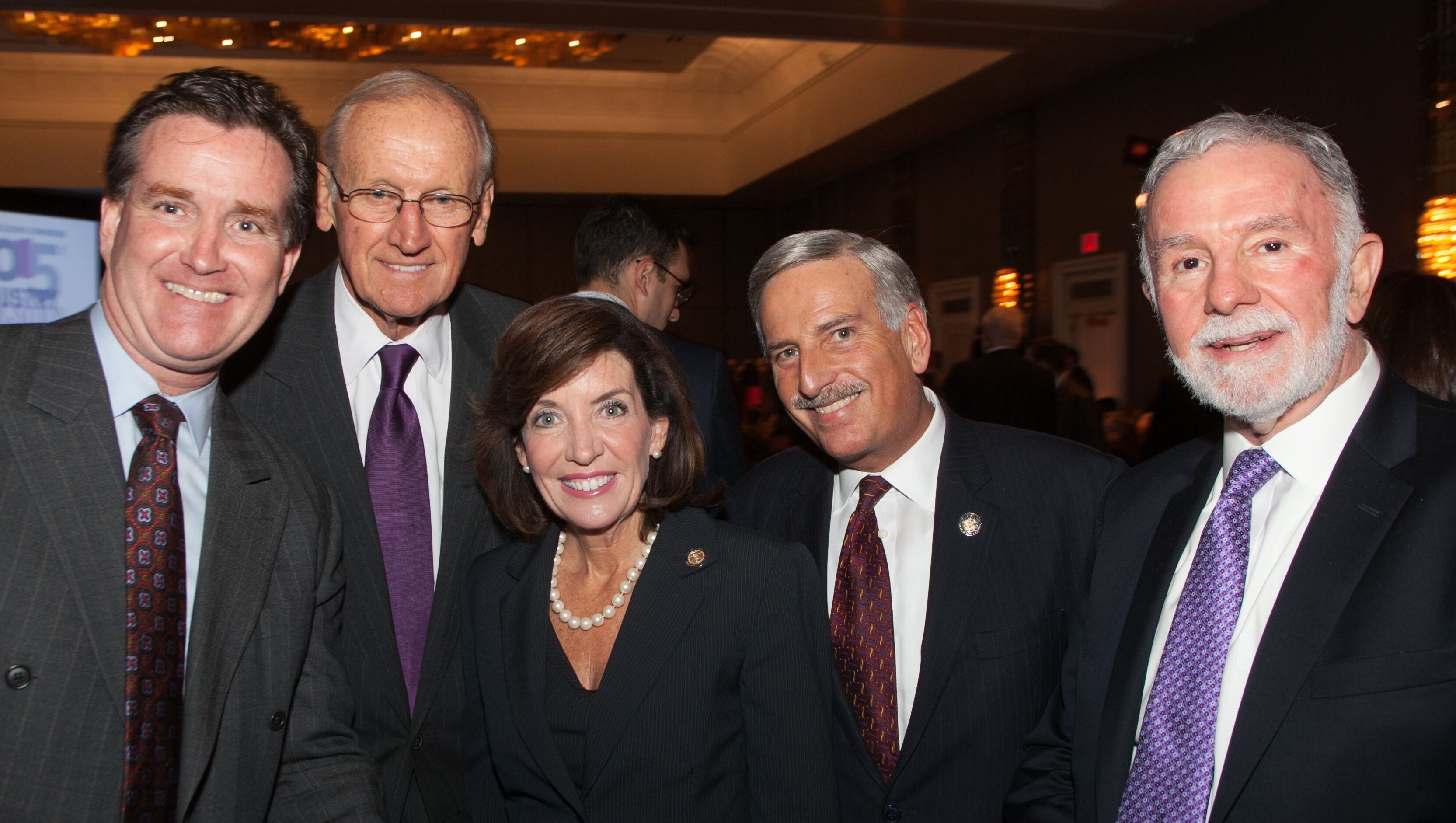 NYBC salutes best of the building community at 2015 Recognition Dinner

Nearly 1,000 members of the building community gathered to pay tribute to four industry legends during the New York Building Congress 2015 Industry Recognition Dinner on November 18 at the Grand Hyatt in Manhattan.

The George A. Fox Public Service Award was presented to the Association of Contracting Plumbers of the City of New York, and the Building Congress gave Special Recognition to New York City School Construction Authority (SCA) President and Chief Executive Officer Lorraine Grillo.

Building Congress chairman Thomas Z. Scarangello, who is also Chief Executive Officer of Thornton Tomasetti, presented the first Industry Recognition Award to Mr. Kohn. “Gene is known for his inspirational leadership and commitment to design excellence. I can attest to this, because my firm has worked with his organization on numerous occasions leading to exceptional building projects. He is a skillful collaborator who has brought together diverse project teams to create buildings that contribute to their surroundings on both functional and social levels.  Gene’s impressive career has spanned more than professional practice.”

During his acceptance, Mr. Kohn said, “Architecture is not a one-person profession. It requires a team – many people working together and collaborating.”

He compared the process to good music in that nobody can appreciate a composer’s work unless it is played by a great orchestra. Similarly, creating a great building requires that architects be joined by talented contractors, engineers, specialty consultants, real estate brokers, and others.

“One has to appreciate that we really are a great team,” he said, adding, “We really have a great responsibility to our City when creating spaces and buildings – to improve the quality of life that gives great hope and happiness to people.”

Mr. Van Buren presented the second Industry Recognition Award of the evening to Mr. Badame.  “Jay’s contributions to the New York City construction industry have spanned over 37 years. He leads Tishman Construction’s operations in New York, New Jersey, and Pennsylvania and serves on AECOM’s Executive Management Committee. His projects include some of our region’s landmark structures, including several of those at the World Trade Center and many other Manhattan skyscrapers. His innovative approach and remarkable leadership are well known. Jay pushes the boundaries of sustainable design and construction, makes effective use of technology to improve efficiency, and has built a reputation for professionalism and exemplary leadership.”

Mr. Badame devoted much of his acceptance to acknowledging and thanking his colleagues, clients, and partners in the building community.

“In this room are subcontractors who have worked with Tishman for many years, who I respect and consider friends. There are clients and (government) agencies here – people that we work with every day of the week who help us build this City. We at Tishman have helped to rebuild the World Trade Center. We’re helping to rebuild Hudson Yards. We’re helping to rebuild Brookfield (Place). We are in Brooklyn working on Pacific Park with Ratner and Greenland.”

He also used a portion of his acceptance to advocate for New York City’s future, highlighting in particular the need to fully fund the MTA’s capital program, build the Gateway Tunnel, rezone Midtown East, and reach a deal to extend the 421-a program prior to the end of the year.

In presenting Special Recognition to Ms. Grillo, Mr. Roman remarked, “Lorraine has performed public service for more than two decades, including the last five as President of the SCA. During that tenure, she has been involved in and overseen more than $14 billion worth of school construction work (adding 50,000 new school seats) and has provided thousands of opportunities to MWBEs. When they say it is going to be finished on time, they get it finished on time. Trust me!” He added about Ms. Grillo and all those devoted to public service, “Thank you for what you do for New York City. Without you, we couldn’t be as great as we are.”

“On this day five years ago, I was appointed President and CEO of the SCA. It is a job that I have loved every single day,” Ms. Grillo said in her acceptance. “There is no question that the SCA has the most talented and dedicated staff anywhere. I have been at the SCA for over 20 years. During that time, I have had the good fortune to have served under some fabulous leaders who have each taught me something that I carry with me today,” she added, citing past SCA leaders Milo Riverso, Bill Goldstein, and Sharon Greenberger, in particular. She also credited the contractors who have worked with the SCA, noting that they “have understood the importance of our mission and have consistently risen to the occasion.”

Of this year’s George A. Fox Award recipient, Mr. Van Buren said, “The Association of Contracting Plumbers, through its Charity Golf Outing and Scholarship Fund, has donated almost $675,000 to seven social-service programs and another $560,000 in college scholarships to plumbing industry students over the last seven years. This exceptional generosity befits one of our industry’s most venerable organizations. Established in 1881, the Association has demonstrated its long-standing commitment to New York City, to the education of its youth, and to public service. Under the leadership of Chairman Ralph DeMartino, President Andru Coren, and Executive Vice President Stewart O’Brien, the Association continues to be at the forefront of innovation and accomplishment in our industry.”

In his acceptance, Mr. DeMartino spoke of his initial reluctance. “There was some debate among my colleagues at the Plumbing Association as to whether we should even accept this award. Life has been good to us. We are better off than 99 percent of the people on this earth – partly due to our hard work, but also partly due to our good fortune, which we want to share with others. We do it because it’s the right thing to do – not for any acknowledgment we may receive.”

He added, “The true award for our efforts is seeing the happiness on the faces of the scholarship recipients who have received a scholarship of $8,000 and a not-for-profit organization receiving a check for $100,000 or more. We do the easy part. We raise the money. These non-profits do the hard work and are the true heroes who should be acknowledged.”

“This dinner celebration began in 1996 on the occasion of the Building Congress 75th Anniversary. Including this year, we have now honored 62 amazing individuals and organizations from the design, construction, real estate, and government sectors in the City of New York,” said Building Congress President Richard T. Anderson. “This year, we are especially grateful to our Dinner Underwriters – AECOM/Tishman Construction/Hunt Construction Group, Bloomberg Philanthropies, CBRE, Kohn Pedersen Fox Associates, and WDF Inc.”