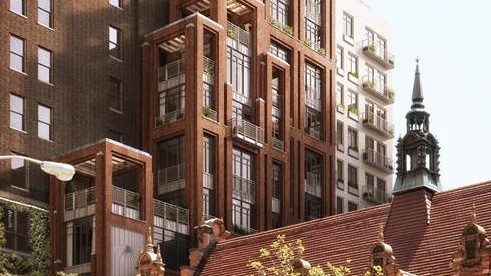 Designed by Rick Cook of COOKFOX Architects and developed by the Collegiate Churches of New York, the new building “fits harmoniously with the distinct streetscape, interweaving the rich historic details of the Upper West Side with subtle contemporary and sustainable design,” according to the architect.

The funds generated by the development will be used to support the Collegiate Churches’ charitable and housing programs, as well as the  maintenance required of its landmarked churches, including the 19th century Dutch-Flemish Renaissance Revival West End Collegiate Church campus.

The architects also incorporated a small garden between the Church and the new development called “Healing Turtle Island Garden,” which references a reconciliation ceremony between the Collegiate Churches and the indigenous Native American Lenape tribe.

“This development will provide us the needed resources to preserve our landmark and sustain the philanthropic work the Collegiate Churches do across the neighborhood, throughout the city and around the world.”

The approved plan allows for the preservation and rehabilitation of 378 West End Avenue, known as West End Plaza, as well as the creation of a new structure at 260 West 78th Street. The development will prioritize connections to nature to promote health and well-being.  It will include high-performance design to achieve LEED certification.

“Our goal was to create a beautiful design that supports the healthiest possible living environment,” said Rick Cook. “We crafted a sculpted massing with intimate terrace gardens that connect residents with nature, and provide a finely detailed backdrop to the gem of West End Collegiate Church and the historic Upper West Side.”

While appearing as two separate buildings with distinct  facades, the 66 residential units, with approximately 9,500 square feet of common amenity space, will be spread across both buildings and exist as one development.

The new structure along 78th Street will feature finely detailed masonry, generous windows and terraced planted setbacks inspired by the surrounding historic Upper West Side architecture. It will replace a 1960s building, known as Platten Hall, which is currently occupied by the Collegiate School.

Improvements to West End Plaza, also currently occupied by the Collegiate School, include the restoration of windows, cornices and two historic balconies, as well as a small penthouse addition.