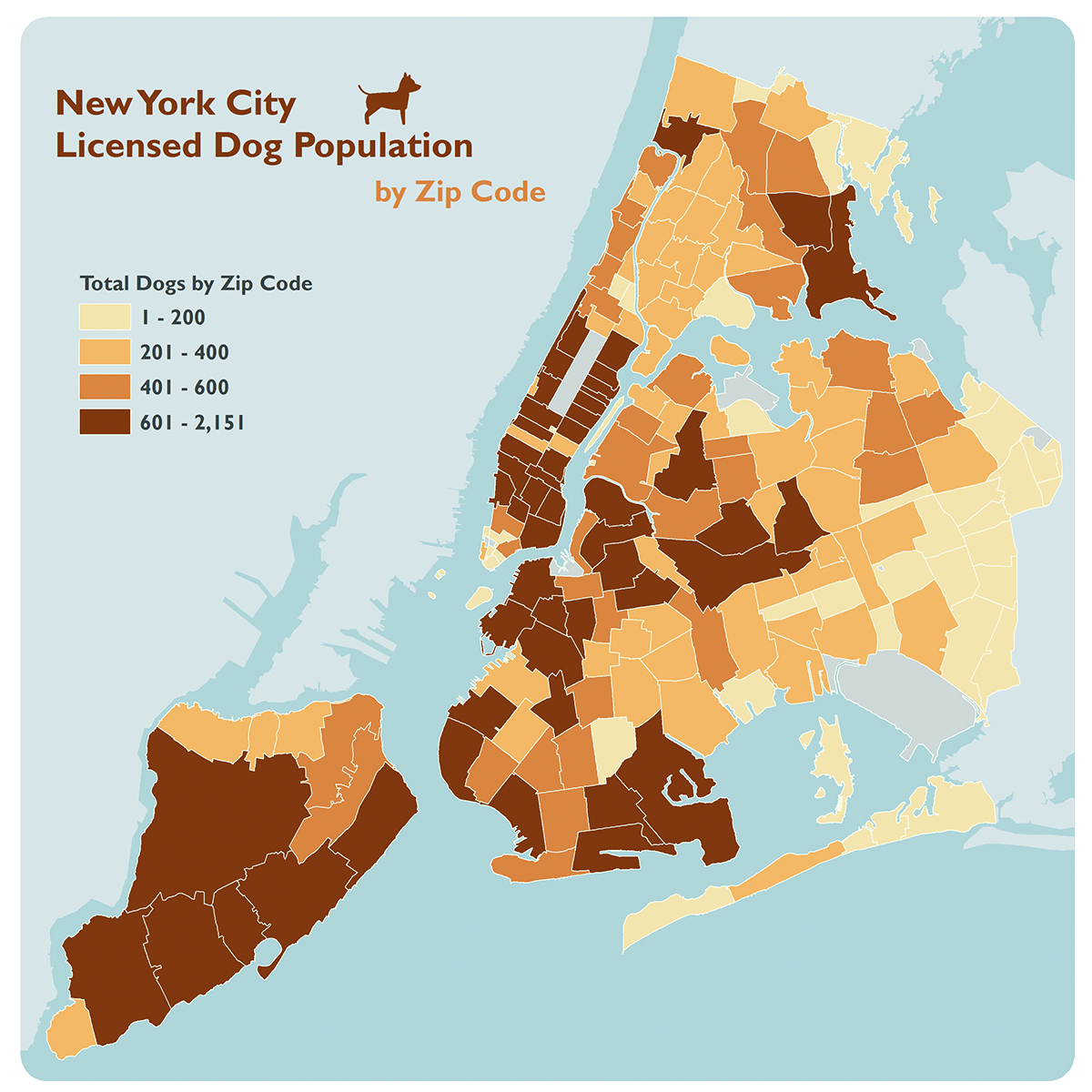 It’s official — New York is a city of dog lovers. The mean streets are populated by 425,000 dogs in homes across the five boroughs — that means that there are more dogs in New York City than there are people in Oakland, California.

New data from the city’s Economic Development Corporation reveals that one in seven households have at least one pup under its roof .

As of February 2017, there were 85,085 dogs in New York City with active licenses. Dogs are required to be licensed by the Department of Health and Mental Hygiene, although only about 20 percent of dogs are licensed.

The latest registry from the Department of Health and Mental Hygiene includes licenses issued between September 2014 and February 2017.

The oldest dog with this profile is Ozzy, a Brooklyn-native Labrador Retriever, born in August 1980. Following, Ozzy, Ruby, and Buckeroo of Brooklyn and Manhattan were born in 1985; Genevieve, Guy, and Zadie followed suit in 1987.

The oldest dog on record was an Australian cattle dog named Bluey who was 29 when he passed away in 1939.

Most dog lovers live in Manhattan, according to the EDC. Long Island City has the highest proportion of dogs per capita, with 180 licensed dogs and 4,702 people (about one dog for every 26 people).

Large human and dog populations do not necessarily coincide. Few licensed dogs claim the southern tip of Manhattan, yet because zip codes 10004 and 10006 also have low population estimates, these neighborhoods have the fourth and seventh largest number of dogs per capita.

In particular, zip code 10069 on the Upper East Side has the second most licensed dogs per capita and the second highest median income in New York City: $105,538.

Most dogs with active licenses in the City reside in Manhattan, while Staten Island and the Bronx are home to fewer licensed dogs.

The pet industry expanded widely over the decade from 2006 to 2015. Across the City, New York gained 38 veterinary firms and 64 pet and pet supplies stores, with increases in each borough, except the Bronx, which had 12 veterinary firms in 2006 and ten in 2015.

The American Pet Products Association reported that total spending in the U.S. pet industry was 60.28 billion in 2015, or 0.3 percent of GDP. Over a quarter of total pet expenditure went toward veterinary expenses, second only to food which accounted for 38 percent of expenditure.

Four of the five most common breeds among dogs with active licenses in New York City are small dogs, perfect apartment and subway-riding size.

Yorkshire Terriers are the most common breed in all boroughs, except Staten Island where they come in second, behind Shih Tzus.

Additionally, of New York City’s 85,085 licensed dogs, 54 percent are male, 83 percent are spayed or neutered, and 83 percent are vaccinated for rabies (one of the purposes of mandated licensing). 44 are registered as guard or trained dogs.