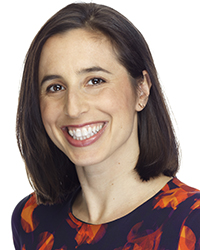 Lurie is an industry rookie whose star is rising

It’s not an uncommon occurrence for those pursuing the entertainment industry to begin a career in residential real estate to help pay the bills along the way.

Danielle Lurie, the reigning “Rookie of the Year” at Corcoran, Multi Million Dollar Club member and one of NRT’s Top 100 Sales Agents opted to take that path.

“When I graduated college, I think I just wanted a job,” Lurie told Brokers Weekly. “I went into real estate.”

Lurie entered the field as a financial analyst for a REIT in San Francisco, but her desire to break into the world of filmmaking never faded.

“I think I always had a love for film,” the Stanford alum said. “So when I was in that (REIT) job, I came up with an idea for a TV show.”

Most ideas for potential television shows or movies rarely end up seeing the light of day. In fact, neither did this one. Lurie’s creation was an improvised sitcom along the lines of the popular Friends or Seinfeld. It would be shot live as a “long form improv show.”

Unfortunately, the support it had initially gained faded and the show never made it to the American living room.

But Lurie’s talent led her to Los Angeles where a substantial career in the entertainment industry would begin.

From 2001 to 2015, she worked as a writer and director. She has made documentaries in war-torn Uganda, and captured a tour of Grammy Winner Sheryl Crow.

Her fiction work has screened at top film festivals, such as Sundance and Tribeca, and has lead Lurie to work with major studios and Oscar-winning actors.

Danielle is a big supporter of women in film and is part of the prominent female filmmaker’s collective, Film Fatales.

So why is she currently a new real estate superstar in New York? Typically, once financial success in an artistic field is reached, more practical jobs are left in the past.

But for Lurie, film was not her only true calling.

“Real estate has always been in my life,” said Lurie who pointed to her mother, Tamar Lurie, as a major inspiration for her. Tamar is one of the top residential brokers in Connecticut and currently works under the Coldwell Banker flag.

“She would always talk about her clients in such loving ways, and talk about their human stories and their human dreams. I was always enchanted by all of her stories since I was a little girl.

“When I graduated Stanford and there was an opportunity to get into the real estate world, even though it was commercial at the time, I felt very at home doing that.”

After getting her feet wet, the business remained as captivating to Lurie as it had when she was a child. Having been lucky enough to live out her dream for a decade and a half, she decided it was time to head back East and make a permanent move to the field.

“What ended up happening really surprised me,” Lurie said. “I fell madly in love with the business of real estate. I discovered that real estate is very similar to film. My buyers and my sellers are my directors and I am their creative producer and also their line producer. It’s very much about a buyer and a seller having this vision for how they want their buying and selling experience to be. And my job is to help realize that vision. It’s so much fun to help people’s dreams come true.”

Lurie said that her current home was her top choice of employer when she decided to return.

“Corcoran was my first and most obvious choice for where I wanted to work,” she said. “Corcoran to me is the top real estate firm in New York.”

Lurie called Pamela Liebman, president & CEO of Corcoran, a “major draw” because she “believes in possibilities and out of the box thinking.”

While she truly enjoys her work, any broker will tell you that breaking into the industry requires persistence and dedication.

“A lot of my business relies on both my market savvy and also on serendipity,” Lurie said. “When I was in training at Corcoran, I got an email from a friend of mine in high school that she was about to sell her Park Slope co-op apartment. She asked if I could come over and take a look.” While Lurie had a connection to this potential client, she was not guaranteed to earn the listing.

“I spent three months wooing her to give me the opportunity to be her listing agent. She eventually said ‘yes.’ When I got that listing, I ended up pouring my heart and soul into it.”

The property was listed at over $1.4 million and after a 13-way bidding way, Lurie helped seal a $1.6 million sale.

“Having those 13 offers come in was like having your film accepted into Sundance,” said Laurie, who might not be submitting anything else to that particular festival anytime soon.

Based out of Corcoran’s Brooklyn Heights office, and after a sensational rookie year in 2015, Lurie has momentum for Brooklyn’s 2016 home-seekers.

One highlight of the year’s opening quarter was a condo listing at The Pencil Factory on Franklin Street.

While she’s looking forward to meeting her client’s needs on the Brooklyn property, it’s hard for Lurie to single out any one special deal that she’s made.

“I find that every sale is a wonderful miracle,” she said. “I feel an enormous gratitude for all of them, sincerely.