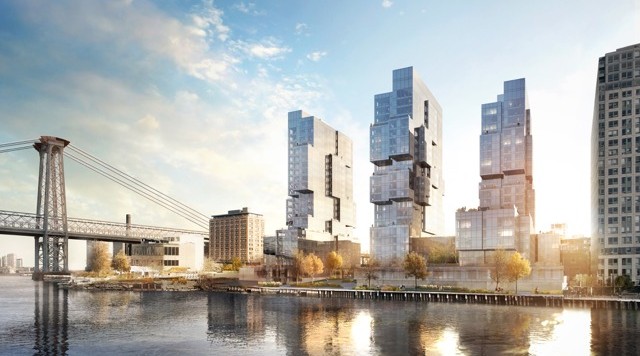 The 800,000 s/f development will include three towers, each 16-stories, with 857 apartments and 26,000 s/f of communal outdoor space. Twenty percent of the apartments will be affordable.

Called Kent, 80 percent of the apartments will be corner units with waterfront views of the formerly industrial site.
Spitzer bought the land for $165 million in the summer of 2014 and said he would spend $700 million developing the trio of towers.

The former governor handpicked ODA for the challenge of bringing quality living to Williamsburg’s waterfront, and to his first development project.

For the project, ODA New York, long-recognized for its modular reimagining of New York’s typical architectural formats, has introduced one notable innovation.

Whereas traditionally, apartment dwellers have had to spar for the four coveted corner units framing each floor of any standard building, by using two standard floor plans — mirrors of each other — and flipping them in different directions around the central axis of each tower’s mass, ODA has created three distinct, multi-dimensional façades, each filled with mid-floor “corner” units.

These shifts in floor plan will use cantilevering to ensure that a majority of units will also feature garden terraces.
Units will have sightlines onto the Williamsburg Bridge, the East River, and eastern vistas of downtown Manhattan, and Kent’s promenade will border the communal boardwalk stretching from Greenpoint all the way to Dumbo. 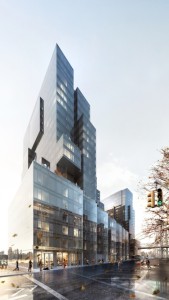 Eran Chen, founding principal of ODA New York, said, “The vast majority of towers in NYC are extruded rectangles. There are historical, contextual and practical reasons for this. As population density in New York increased, our habitats borrowed from the corporate archetypal towers and took on a similar two dimensional structure. Our reliance on this big box concept created an inherent locational hierarchy with its shape – corner apartment, corner office, corner view etc. ODA challenged this hierarchy by designing a tower where every dwelling unit is a corner apartment.”