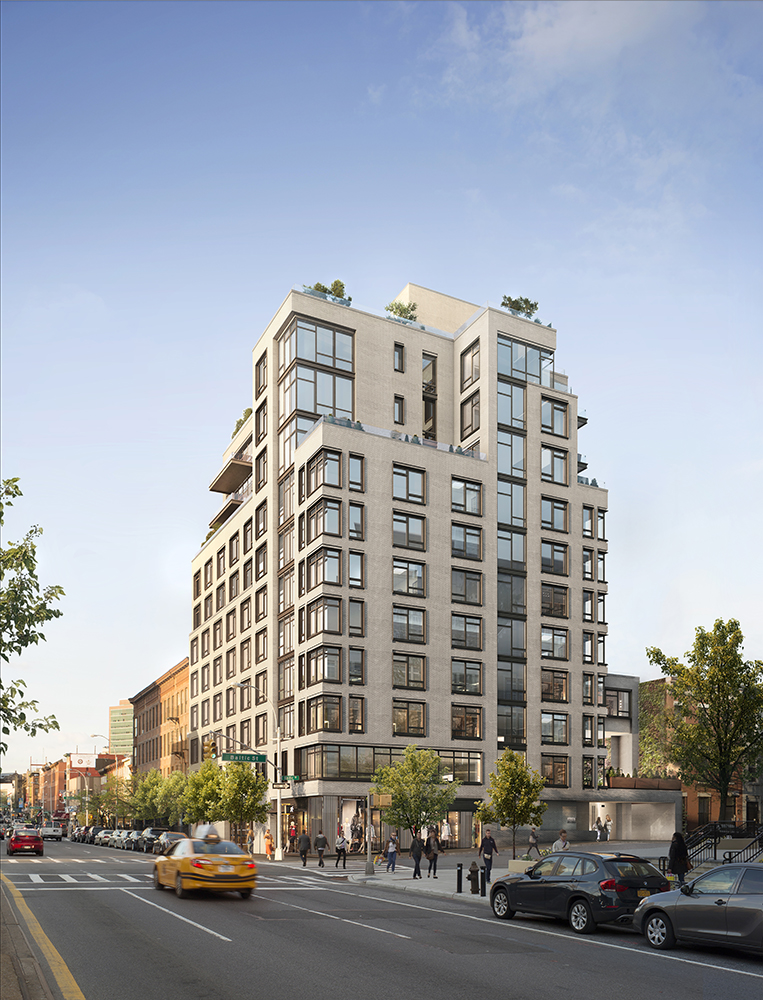 For JDS, home is where the art is

The team behind JDS Development Group’s Park Slope development, Baltic, is using a different approach than the typical cocktails and hors d’oeuvres to entice buyers — they’re turning the sales gallery into a modern art museum.

The sales center for JDS Development’s new Park Slope luxury condo building at 613 Baltic Street at 303 Bond Street, features several large-scale art pieces made from the materials that Baltic will be constructed with, including marble, granite, quartz, labradorite, and walnut and oak.

The abstract art sculptures were created by Anna Karlin, an artist and designer who also makes furniture and lighting.

“We think it fits in really well with Brooklyn and the neighborhood,” said Marci Clark, director of marketing and communications at JDS. “It’s a way to have the materials speak to you and grab you, and speak to them in a less traditional way.”

Clark and the team at JDS came up with the idea for an art display while discussing the materials being used to construct the building, and looking at photographs of quarries in Italy where massive pieces of stone are moved around.

“We wondered how we could achieve that in a way that could communicate well to a buyer,” said Clark. Once they found Karlin, they shared their vision with her of creating an atypical sales gallery experience while still being appropriate for the building and neighborhood.

“I think this is something very unique and outside of the box for a sales gallery experience, something different, and we’ve been really getting a great response from buyers walking through, they love it,” said Clark.

Sales began a few weeks ago, with prices starting at $1.325 for two bedrooms, and $1.995 for three bedrooms, and response has been “incredible” so far.

“People are just really impressed with the quality they’re seeing here and what will be in the building, and the prospect of owning a JDS property at a much lower price point than any of their Manhattan properties,” said Penelope Stipanovich, of Corcoran Sunshine, who is the director of sales at Baltic.

The most expensive unit at the building is listed for just over $3 million.

The 11-story condo building on the corner of Baltic and Fourth Avenue will have 44 units, just two of which will be one-bedroom units. The team chose to have a unit mix with mostly two and three bedroom units, based on market research.

“Even though it’s 44 units, we were very sensitive to the neighborhood in terms of height, and we wanted to make sure we found the appropriate form to blend into the neighborhood,” said Clark.
While the price points are lower than other JDS projects, the company spared no expense with amenities at Baltic.

The front entrance of the building will boast a private covered entry drop-off that leads down to a private underground parking garage. Residents will have access to a landscaped roof deck that will feature an outdoor movie theater, and some units will have private terraces.

The building will also have a resident lounge, fitness center, and bike storage.

JDS first acquired the site in 2014, and construction began the following year. The building is expected to top out at the end of the summer, and the company expects a third quarter 2017 move-in date.

There are two retail spaces on the ground floor of the building, one of which will be a 1,200 s/f community center. The other space is 3,000 s/f and has not yet been leased, but there has been a lot of interest, according to Clark.

“We’re looking for the right tenant,” she said.

The building is in a central location, with close proximity to Atlantic Terminal and Barclays Center, as well as Prospect Park, and in the middle of a burgeoning retail scene.

“Fourth Avenue is just starting to get developed,” said Clark. “There’s a lot in the pipeline, with construction going on all around. I think this building is really setting the bar high for what’s to come. It’s going to be a great addition to the avenue.”

Architectural firm VOA designed Baltic, with principle Brian McFarland, who previously worked with JDS before, while he was at CetraRuddy, on both Stella and Walker Tower in Manhattan.

“This isn’t our first project in Brooklyn, and we’re really excited to bring this kind of well-built ethos to the borough,” said Clark.

Along with Baltic, JDS is currently developing 9 DeKalb, the 1,066-foot tower that will rise in Downtown Brooklyn, next to the Wool & Dime Savings Bank, a series of townhomes in Far Rockaway, the 800-unit double tower 616 and 626 1st Avenue in Murray Hill, and a small boutique project in Chelsea.

“We are getting a lot of interest both from local people who already live in Brooklyn, and also Manhattan interest,” said Clark. “There’s something about just going back to the basics, looking at the material, appreciating the materials. With JDS, it’s important to us that we deliver and the way the materials meet is thoughtful and carefully considered by those in the field doing the work.”